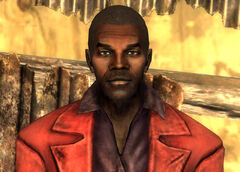 Eulogy Jones, head of the slavers in 2277

The slavers are a faction operating in the Capital Wasteland, centralized in Paradise Falls in 2277.

Although the region's earliest history of slavery since the Great War is unknown, it was well established if even more chaotic by the 2250s.[1] The slavers' past leaders included Penelope Chase, and Harmon Jurley. Miss Chase, aka the Black Widow, was their leader until around 2250 with her death preceding the destruction of the Kingdom of Rockopolis. Harmon Jurley took over the position after her death.[2] The slave trading partnership between the Paradise Falls slavers and the slavers of the Pitt was already in place by the this time.[3] Jurley held his title for decades, until he was killed by Eulogy Jones.[4] The slavers' reputation became so fierce by this time that the denizens of Arefu destroyed the north ramp of the bridge on which their settlement was built to better protect themselves from the slaver threat.[5] The slavers have a fairly limited clientele, and sell mostly to their return customers, the raiders. Allistair Tenpenny, founder of Tenpenny Tower, also has dealings with the slavers.[6][7]

The earliest known slaver activity was their extermination of the town of Ridgefield. They captured nearly the entire tribe of military survivors who settled there. Its last survivor, Arkansas, was a small boy at the time, but he managed to escape undetected. Returning and vowing revenge, the boy implemented a plan to make the locale a deathtrap for the slavers. He filled the town with frag mines, then spread rumors of a new band of inhabitants and waited. When the slavers came to raid the town, they were harried by a hidden sniper and decimated by landmines. The slavers took heavy casualties that day and never came back. The town became known as a ghost town avoided by all thanks to its reputation for being haunted, cursed, and full of explosives. Traders eventually gave it a new name, "Minefield," and Arkansas, now an old man, still shuffles around guarding the place.[8][9][10][11][12][13]

The demise of Rockopolis was a fortuitous one for the slavers, engineered completely by accident. Its demise began when, after Herbert Dashwood and Argyle were captured, the two managed to escape their slave collars. Dashwood insisted on trying to rescue the mysterious woman who was locked in "The Box." They subdued the guard and unlocked the Pulowski Preservation shelter to find that it was empty. Another guard found them and at gunpoint demanded they surrender, only for the mystery woman to appear behind him with a metal object. She hit the guard from behind and introduced herself as Penelope Chase, "fortune hunter," claiming that she freed herself when she noticed their predicament. Argyle was hesitant to trust her, but Dashwood was enthralled and, after a brief introduction, the trio made their escape.[14] This was a ploy to get them to give up any safe harbor they might have had.

Some time later, while the trio were being chased by super mutants, Miss Chase noticed that they were near the hills where the hidden village of Rockopolis was located. When she lamented not knowing where it was, Dashwood immediately cut her off, and in an attempt to impress her, started bragging about how he and Argyle were old friends of the settlement, further revealing that they knew the secret knock and more. Argyle showed his displeasure in so readily trusting the woman with such privileged information. Dashwood cut off Argyle, assuring him that Miss Chase would not violate the secrets of Rockopolis, and furthermore, they needed a place to hide from the mutants.[15]

Upon entering, Argyle again pointed out that they were in Rockopolis, one of the safest places in the wasteland, and they had just given its secrets to a stranger. Dashwood attempted to dissuade his companion's outburst to Miss Chase, only for her to reveal herself. Pulling a gun on the pair, she claimed that her slaver associates would be right behind them. They then realized who she really was - not Penelope Chase, "fortune hunter," but instead the "Black Widow," leader of the slavers. She boasted about how the slavers could never have found the denizens of Rockopolis without Argyle and Dashwood.[15] As she was demanding no trouble from Argyle, he used his kung fu skills, using a move he called the "Eagle Claw" to rip out her heart, killing her instantly.[16] Although Dashwood escaped, Argyle died and the village was taken by the slavers (Rollings being among them). The slavers captured as many as they could and sold the settlement's people north to the Pitt.[3] With Penelope Chase dead, Harmon Jurley would take over as leader of the Slavers for the next couple decades.[2][1]

Their current leader is Eulogy Jones, a charismatic and ruthless man who leads by fear, persuasion, and intelligence, preferring to get others to do his dirty work. To take power, he first used his slaves as prostitutes to learn nearly every secret in Paradise Falls. Eventually, he personally killed the previous leader, Harmon Jurley, and established control over the slavers. Eulogy has survived several assassination attempts, and is known for a short temper.[4][17][6]

The slavers get paid on commission, based on the number of wastelanders they bring in,[18] and have become more organized in recent years.[1] Fortunately for the denizens of the Capital Wasteland, slave collars are a rarity, which makes the slavers' job much more difficult.[19] Apart from the regular captures, they will take special assignments from very well paying clientele, including Zimmer, who is seeking out a particular android hiding in the Capital Wasteland.[20][21]

In an attempt to get a larger market for their wears, Eulogy Jones at one point attempted to pressure former slaver, Seagrave Holmes into becoming an envoy for his efforts in Rivet City.[22] In addition, a man named Ramsey led a small outpost at a train tunnel near Fort Constantine, its purpose being to scout the wilderness and capture and enslave travelers. Throughout the Capital Wasteland, small teams of slavers will roam the wilderness in search of slaves or running slaves back to Paradise Falls.[23]

Paradise Falls is guarded by and serves as a home to a cadre of battle-hardened slavers with no aversion to the profitable business of slavery. The inhabitants of Paradise Falls are infamous for their incursions into Big Town, and on rare occasions, into Little Lamplight. The slavers are also known to seize random wastelanders, and the town is frequently mentioned on the Herbert Dashwood program on Galaxy News Radio. Past members include Flak and Doc Church.

The slavers' relative success is not without opposition. The growing abolitionist movement has become a large enough of a threat to warrant special attention. A team of slavers led by Leroy Walker occupies the Lincoln Memorial in order to prevent escaped slaves from settling it for the purpose of boosting morale or inciting a revolt.[24] Furthermore, they began planning raids on the Museum of History to burn historical artifacts relating to Abraham Lincoln.[25][26]

Among the organizations that are the enemies of the slavers are the Temple of the Union, made up of escaped slaves, the Regulators, as well as the Railroad.

The current structure of the slavers is Eulogy Jones as the dictator, with the individual slavers operating on commission for slaves. The dictator can and has installed a leader of an expedition to the Lincoln Memorial to destroy it and capture any slaves that escape to there.

Slavers are only accepted in the settlement of Paradise Falls. Every other settlement in the Capital Wasteland either cowers in fear of their presence or are actively hostile toward them. The only exception is the recently established Canterbury Commons, who do not engage in the practice of slavery nor have suffered a slaver raid.

The slavers are hunting for stock among the transients and denizens of the region, basically anyone who cannot put up a fight. Because the Capital Wasteland is a desolate and relatively barren landscape between towns, wastelanders are ripe for the picking here. The number of slaves present compared to the number of slavers is remarkably low, meaning that the slaves are being shipped elsewhere. When the slavers capture their victims, they either keep them for local buyers or traffic them to richer places outside the region, like the Pitt.[27]

Slavers play a fairly large role in Fallout 3. Paradise Falls is a slaver compound, and several quests feature slavery as either major or minor elements, most notably Head of State and its association to slavery and Abraham Lincoln's role as the "Great Emancipator." Additionally, the Lone Wanderer can capture people to sell them to slavers. The Lone Wanderer can even buy a slave, Clover, who will then serve the player as a bodyguard.

If the Lone Wanderer begins bringing slaves to Paradise Falls, a random encounter may occur that involves a group of slavers that cannot keep up with the competition. In an attempt to gain more profits, they will try to kill the player character.

The level of technology of these slavers is that of any well equipped scavenger, utilizing small arms and a wide range of armors. The only major difference is their accessibility to slave collars.

According to The Art of Fallout 3, the Slaver aesthetic was described as: "Stolen Police Gear v.s. Rockabilly aesthetic," as well as "50's biker girls Roller Derby."

The Paradise Falls slavers appear only in Fallout 3, and are mentioned in the Fallout 4 Creation Club content "Capital Wasteland Mercenaries."