“Oh, I... I'm sorry. Things have been tense here lately, and I'm afraid it's getting the better of me. I shouldn't be taking it out on you. Did you need something?”

Specialist Olin is a member of the Brotherhood Outcasts located at the Outcast outpost at Bailey's Crossroads in the year 2277.

Cordial but unimpressed with bluster or violence, Olin is a valuable member of the Outcast team. She is charged with maintaining and running the various electronics and servers recently discovered inside Bailey's Crossroads Outpost. She seeks to catalog and test all the items within the Outpost complex, but has had no luck breaking open the heavy blast door, which she believes leads to a bounty of lost technology.[1]

Olin appears only in the Fallout 3 add-on Operation: Anchorage.

Outcast members Sibley, Olin, McGraw and Morrill, all of whom appear in the Operation: Anchorage add-on for Fallout 3, appear to be named after buildings on the campus of Cornell University, including Sibley Hall, Olin Hall, Olin Library, McGraw Hall, McGraw Tower, and Morrill Hall. 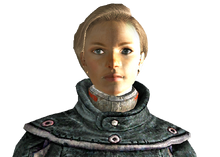