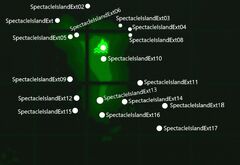 Spectacle Island is a location and settlement in the Commonwealth in 2287.[1]

Spectacle Island is a small island on the coast south-east of Boston, near to Warwick homestead. The original settlers on the island had constructed a basic settlement with a sonar pulse beacon that released a high pitched sonic pulse capable of repulsing or killing mirelurks. The beacon is represented by a structure similar to a siren or radio antennas connected by a long wire to a sunken ship, as the ship's generator room is still operational and provides power for the beacon.

The appearance of a raider on the island suggests the settlers fled or were killed by raiders or mirelurks. The raiders apparently disabled the pulse beacon, and one was killed by either Randy or the mirelurks soon after, as he is found near Randy's corpse. Any other raiders looted the area and left, allowing the mirelurks to return.

A beached barge on the northeastern portion of the island has a large shipment of Vault-Tec crates within it. It is unknown if these were being shipped to work on one of the incomplete vaults of the Commonwealth such as Vault 88, Vault 114 or Vault 118, or if these supplies were to be used in the construction of a new vault.

To unlock the island for use as a settlement, the Sole Survivor must go to the partially submerged boat to the south and flip the switch on the circuit breaker. This will cause the screen to shake and a mirelurk queen and several hunters will emerge, as well as potentially a legendary mirelurk deep king.

To finish the unlocking process, one must go back and flip the circuit breaker on the radio tower. After a few seconds, this will send out a pulse which will drive all remaining mirelurks to the shores of the island. It is not necessary to kill the queen, as she is affected by this pulse as well. The workshop will then unlock, and one will be able to build at any point on the island.

The island has several buildings scattered across it (mostly shacks and ruined houses). The north side of the island contains several crafting stations in a small shed across from a destroyed house. The main workshop, along with a radio tower, is located in the center of the island. To the south is a destroyed boat containing the Luck bobblehead as well as a large power generator that connects to the radio tower through a series of pylons. Mirelurks populate the shores, as well as the wreckage of several boats.

Spectacle Island appears only in Fallout 4.

這座島還原了現實波士頓港的奇觀島。20世紀時原本作為垃圾掩埋場，而後在大開掘期間，工程所挖出來的廢土被用來填滿島上的掩埋場，並將其轉型成公園。如今已成為波士頓港群島國家遊樂區的一部分，擁有碼頭，遊客中心，咖啡廳，救生員游泳海灘和步行道。Spectacle Island is staffed by park rangers and staff year-round by the Massachusetts Department of Conservation and Recreation.

The boat that has the generator inside needed to inhabit the island. There's a Fat Man inside and the Luck bobblehead can be found on the second floor