Outdoors between 6 AM and 6 PM: +2 Strength and Health regeneration 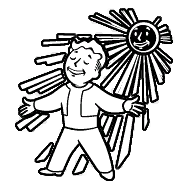 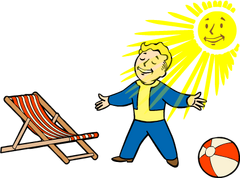 “You gain an additional 2 points to Strength when in direct sunlight, and slowly regenerate lost health at a rate of 1 HP every second.”— Fallout 3 in-game description

Solar Powered is a perk in Fallout 3, Fallout: New Vegas, Fallout 4, and Fallout 76.

Unlike Night Person, which operates both indoors and out, this perk only operates outdoors. It is in effect between 6 AM and 6 PM. It synergizes well with Rad Absorption for healing minor health damage and minor radiation poisoning while exploring or fast traveling.

“Catch some rays! A good perk for the extra melee damage, carry weight, Health, and Action Points you receive. When you're finally able to regenerate Health, combine this Adamantium Skeleton (which heals limb damage) and snoozing on a bed during the night. Focus all your exploration during daytime hours.”— Fallout 4 Vault Dweller's Survival Guide description