Mothmen, referred to as the Bright One(s) by cultists, are cryptid creatures found in Appalachia. It has a museum dedicated to its mythology and is worshiped by the Cult of the Mothman. It appears as part of a random encounter. If approached but not attacked, it will fly off and disappear.

主页面: Cult of the Mothman

Prior to the Great War, the "Mothman" was a mythical creature in local Appalachian folklore that was described as a terrifying half-man, half-moth hybrid that stalked the area around the town of Point Pleasant.[1] The story of the Mothman was sensational enough to create a wide following, ranging from cryptid hobbyists to aggressive conspiracy theorists hellbent on uncovering the deeper mystery of the creature. The Mothman's legend lead to a number of tourist attractions, such as the Mothman Museum in Point Pleasant. Stories and other popular fiction were sold as novelty holotape recordings.

Ultimately, the interest in the Mothman was generally unserious and not seen as worthy of genuine scientific inquiry by the scientific community.[2] While the legend of the Mothman was seen as a simple folktale, a clandestine following of the creature emerged in secret. The mysterious Cult of the Mothman, its followers fervent in their worship of the Mothman as a divine being, practiced numerous rituals and established numerous hidden shrines that can still be found all over post-War Appalachia.

As the nuclear holocaust loomed on the horizon, the cult attempted to summon the creature to benefit from its cosmic wisdom and earn protection from the nuclear fire soon to rain from the skies.[3] The summoning was complete on October 22, 2077, and visible to just one of their number, Brother Charles, who immediately shared the wisdom he received, speaking of floods to come on the following day. The faithful took it as a signal to gather on the rooftops to avoid the destruction and give praise to the Mothman.[4]

The flood came, with the cult members heeding the warning and deciding to seek shelter in high elevations, but the flood happened not quite how they expected it, instead taking the form of nuclear fallout. Remnants of their cult activities littered Appalachia long after the followers perished, as did the Mothmen, and these giant mutated moths would continue to remain in the region for years to come.

The Mothman is described as being a "winged beast with piercing red eyes that prey on those in the Point Pleasant area."[5] Its carapace sports a dark and furry texture, and its multifaceted eyes glow various colors; it also possesses a beak-like mouth. Its wings are membranous and veined, akin to a real-life fly or moth. When idle, they typically remain perched with their wings shrouded around them to greatly diminish their silhouette. They are capable of spreading their multiple wings wide when attacking or when granting boons. Mothmen hatchlings emerge from Mothman eggs as fully-formed, tiny Mothmen.

Mothmen are giant man-sized moths with compound eyes (typically red but can be multiple colors), large membranous wings and two large antennae sprouting out of the top of the head. It is skittish and quick to flee in certain encounters.

Mothmen encountered in the wild may only spawn during the evening at specific random encounter locations, and never appear during the day. The Mothman has a large detection radius, and will typically observe the player character until they get too close. Depending on the variant, it will be passive or immediately aggressive. If a player does not engage the Mothman in combat, it will flee by vanishing into thin air, briefly leaving a dark shadow behind.

In combat, Mothmen attack by aggressive vocalizatizing, which generates waves of sonic blasts that cause staggering and blurred vision. They will often launch into the sky and reappear at another position in order to evade and confuse opponents. Upon death, they will disintegrate into a pile of ash as if killed by laser weaponry. Because of this, challenges that involve taking a photograph of a mothman should be completed when it is still alive as the ash pile that's left after its death cannot be photographed for challenge credit.

A timid Mothman that flees as soon as it enters combat. It is invulnerable.

The black Mothman with glowing red eyes, as the name implies, stalks the player character in proximity. It isn't aggressive, but will defend itself if attacked.

The glowing Mothman has been highly irradiated, and as a result, now glows. It has a mostly black body with glowing green features.

The Scorched Mothman has been infected by the Scorched Plague. It is one of the rarest creatures in the game, only encountered after a Mothman has Scorched by a scorchbeast. Alternatively, one may be found in Enclave research facility.

A non-hostile, purple-eyed Mothman seen after completing The Path to Enlightenment event quest at the Landview Lighthouse. If interacted with, the wise Mothman will grant a +5% Experience Point boost for the next hour.[6] One may also appear in a random encounter, but won't have the option for an Experience Point boost.

A tiny Mothman encountered only during Daily Ops.

The Mothman appears only in Fallout 76. 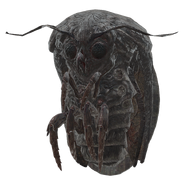 Glowing Mothman at the Moth-Home

Mothman at the Kanawha County Cemetery

Wise Mothman in flight above the Landview Lighthouse 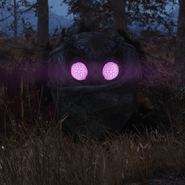 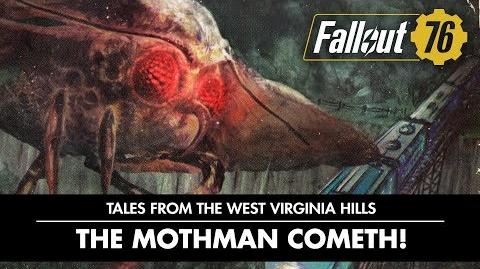