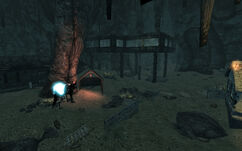 “I used to leave it outside his dog house, chock-full of chems. Before the cybernetic modifications, of course.”— Borous, referencing Gabe's bowl

A Brain's Best Friend is a side quest in the Fallout: New Vegas add-on Old World Blues.

To begin the quest, enter The Think Tank and initiate dialogue with Dr. Borous. Following all speech paths, Dr. Borous will mention his pet dog, Gabe, and the experiments inflicted upon Gabe. After this talk with the doctor, head over to Higgs Village, which is in the south of Big MT. When the Courier first enters, the objective is the house to the left on the far corner; House #103. Behind the house is a doghouse with the letters "GABE" spelled out below it on a mat. Gabe's bowl is also on the mat, which the Courier must take.

With the Wild Wasteland trait, a unique miniature deathclaw named Stripe will be inside the doghouse. His name will be shown on the doghouse, and the letters from Gabe's name will be scattered on the ground. Stripe has the melee damage and health of a full sized deathclaw alpha male. He will only pursue the Courier to just near the fountain, then run back behind the house. Stripe will also appear after this quest has been completed if the Wild Wasteland trait is acquired through Sink Auto-Doc after retrieving Gabe's bowl. Additionally, a "chicken leg" will appear at the door of the doghouse.

The Courier should then proceed to the X-8 research center and go through the main quest line for this area, X-8: High School Horror!, until they reach the Residential Test Facility portion of the quest. After activating the Residential test, the Courier will encounter a simulation of a house with a garden, and a unique cyberdog named Gabe will be patrolling the area. The digging areas must be searched, which will have quest markers pointing to them, until an audio sample called "Gabriel's bark" is found. Dr. Borous will be grateful if Gabe is not killed, although utilizing proper dialogue when speaking to Dr. Borous will result in positive responses even if he is killed. Once the Courier finds the audio tape, some robo-scorpions will appear and proceed to attack Gabe. It is possible to save him, but the player must act quickly. Even if Gabe is saved from the robo-scorpions, he will still remain hostile.

When the Courier returns to Dr. Borous and gives him the dog bowl, he will reminisce about his dog and thank the Courier for killing Gabe, as he believes it saved him the trouble. If Gabe is kept alive, Dr. Borous will thank the Courier for sparing him. For Dr. Borous to feel remorse for the horrid experimentation he did on Gabe, a Speech check of 45 must be passed or a dialogue option granted by the Animal Friend perk.

The quest name comes from the common phrase, "A dog is man's best friend." 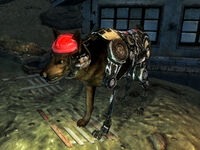 Stripe, the new owner of the doghouse with the Wild Wasteland trait 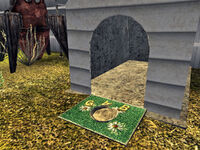