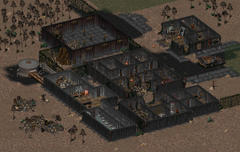 The Great wanamingo mine is a location in the city of Redding. It is one of the gold mines of the region, on the west end of town.[1] By 2241, it became inactive thanks to being infested with the alien-like wanamingos.

The great wanamingo mine was shuttered after the emergence of wanamingos. The slaves working the mine were forced to blow up the dynamite store in order to escape the abominations.[2]

The wanamingo mine has an above-ground area and below that a two-level tunnel system. Numerous entrances to the mine exist, including one inside a ripped-open grave in the mining camp. Travel within the mine is extremely precarious, as the wanamingos have extraordinary senses of perception and can detect intruders even through the walls of the mine, rushing in quickly to dispose of any interlopers. The mine is rumored to contain explosives as well as special electronic chips within the rusting hulks of the mining machinery.

The great wanamingo mine appears only in Fallout 2.

The fenced-off building in the west appears to be the "Skum Pitt" and looks like a drinking establishment. In Fallout, the Skum Pitt bar can be found in Junktown.

Top level of the underground mine

Bottom level of the mine