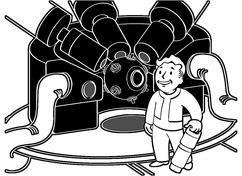 When ready to continue, take the central lift up to the Relay room. Upon entering the relay, one should get a warning that relaying to the Mass Fusion building will make them a permanent enemy to the Brotherhood of Steel. Continue and the player character will be teleported to the Mass Fusion executive suite.

Upon arriving at the Mass Fusion building, there will be Brotherhood faction members present throughout the building. As with other factions, one must fight down through the building, obtaining an Executive keycard and re-routing power to the elevator when it stops. Both the keycard and the laboratory password are located in a desk on the second floor of the first room one enters. The password is used to access the executive lab terminal (also in that first room) which will tell the Sole Survivor exactly where the beryllium agitator is located within the building. For a little more backstory, grab Oslow's office recording on the table beside the terminal. Afterwards, proceed to the executive elevator in the center of the room and proceed down into the building.

If the player character takes the restored elevator down, they'll end up at the ground floor lobby, where there is another elevator that will take them down to the reactor level. If the player character uses the key and drops down instead, they'll end up on the next floor under the glass floor. From there they'll need to fight their way down to the lobby, making sure to grab the Strength bobblehead if they haven't already. If the player character hasn't entered the building prior to this mission, there may be both Gunners and Brotherhood soldiers found on the levels, although usually the Brotherhood is pretty thorough about killing off the Gunners.