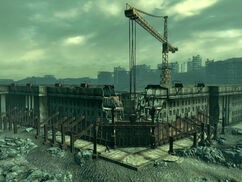 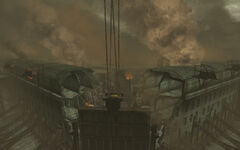 The Citadel is the heavily defended headquarters of the Capital Wasteland Brotherhood of Steel, built into and beneath the ruins of the Pentagon in Washington, DC. It is located on the west end of Arlington Memorial Bridge, northeast of Arlington Library, and initially consists of 4 interior sections.

The ruling council of the Brotherhood of Steel, based in the Lost Hills bunker in South California, decided to send a contingent of soldiers to the East Coast, to recover any and all advanced technology from Washington, DC and to investigate the reports of super mutant activity in the area.

The Pentagon, as they had feared, was largely destroyed. But its sub-levels remained intact, and contained enough pre-war technology and weaponry to keep Brotherhood forces going indefinitely (once the defense robots were destroyed). But there was something else, as well… They found Liberty Prime, a technological marvel that, if restored, could help the Brotherhood rebuild a strength and reputation that had been declining steadily for years.

The discovery was significant enough to earn Paladin Owyn Lyons a battlefield promotion to Elder, and a new directive from his superiors – to establish a new, permanent Brotherhood base in the Capital Wasteland, and continue the search for any other advanced technology hidden in the capital’s ruins.

Lyons accepted his new post gladly, and founded the Citadel, built into and beneath the ruins of the Pentagon. It was a fortress the Brotherhood of Steel desperately needed, and one they rushed to fortify, thanks to their other great discovery – Super Mutants[1].

The Citadel is a large fortress with walls of stone and steel. It retains its shape which gave it its name  the "Pentagon" and has only a single entrance, a large metal gate usually guarded by multiple paladins. A small corridor leads from the main gate to a door which provides access to the inner bailey.

The inside is inaccessible until you complete The Waters of Life segment of the main quest. Entry is scripted as part of the completion of this quest. Before then, the guard commander Paladin Bael will gruffly deny you entry.

The fairly large bailey serves as a training and sparring area. Under the command of Paladin Gunny, new recruits practice various skills from unarmed combat to firearm usage. To this end, the bailey contains shooting ranges and other installations for combat practice. A large hatch in the middle of the courtyard connects to the Laboratory, although it cannot be used as an entrance by the player. The Laboratory and A Ring, sections of the buildings which surround the yard, can be accessed through doors opposite and next to the main entrance.

The A Ring is a small sector within the Citadel which can be accessed directly from the bailey. The entrance is on the right when you enter the Citadel.

The A Ring contains Lyon's Den, the Great Hall, the Library and entrances to B Ring as well as Citadel Laboratory. The Lyon's Den is the quarters of Lyons' Pride while the Great Hall serves as a briefing room for high-ranking Brotherhood members and the Pride. Their meetings can be overheard occasionally, they don't mind if you walk in either.

In the Library you can find the Vault-Tec terminal you need to consult as part of Picking up the Trail. Another terminal reveals some background information on the Maxson family and various tidbits of information about the history of the Brotherhood.

The B Ring is another section within the Citadel which can only be reached from the A Ring via two doors in the back. It consists mostly of sleeping quarters for all Brotherhood of Steel members as well as a medical bay and the private quarters of Owyn Lyons and Arthur Maxson.

Squire Maxson's room contains has a hackable terminal in which, among various children's stories and other personal entries, you can find the location of a Guns and Bullets magazine under the bed in the Lyon's Den (A Ring).

The medical bay is home to Sawbones, a Mr. Gutsy robot, who is the slightly malfunctioning doctor of the Citadel.

The Laboratory is the third sector of the Citadel, connected to both the bailey and the A Ring. It spans two levels and consists of the main working area, the Armory and sleeping quarters for the Scribes. Various terminals with technical background information on weaponry are scattered all over the place.

The lab is naturally the working place for most of the Scribes save for those of the Order of the Quill. While they are conducting research on various fields such as threat assessment, weaponry and defensive technologies, their main focus is the work on Liberty Prime, a gargantuan pre-war robot and the reason the Citadel base was established in the first place.

Scribe Rothchild who is part of various main quests is usually to be found in the area just in front of the robot, on the bottom level. In the vicinity of the robot dock there's also a terminal with progress information on the work on Liberty Prime which lets you run a sound check.

On the wall at the bottom level there is a digital map display from which you can extrapolate the location of the Vault-Tec vaults in the Capital Wasteland if you have not already found them. After Scribe Rothchild has used it to show you the location of Vault 87, the map markers will automatically be added to your Pip-Boy 3000.

The Armory is located in an extra room on the bottom level and is run by Knight Captain Durga. She will only trade with you if you have Elder Lyons' permission which is easily obtained.

If you chose to take the option of destroying the Citadel in Broken Steel, you will find a door leading to the armory within the crater, and one on the far side of the circular path around the crater. This section is not to be confused with the regular Armory located in the Laboratory.

Within the armory, there are 4 First Aid Boxes and plentiful supplies of various ammos and weapons. In the offices beside the armory, there is a terminal describing several "incident reports" and a wall-safe (unlockable through the terminal) containing Callahan's Magnum and magnum rounds.

The Citadel appears only in Fallout 3.