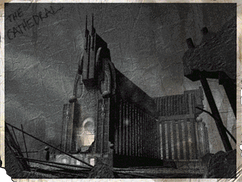 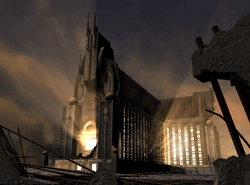 To the outside world, the Cathedral is nothing more than an innocent (albeit intimidating) set up for the Children of the Cathedral organization, which tries to bring love and peace to the wastes. Below it, however, lies a secret underground Vault (more specifically, the Los Angeles Vault), which serves as a home and base for the Master.

The Cathedral was destroyed in 2162 either by a man known as the Vault Dweller or by the Master himself, when he learned that his super mutants were sterile.

Most of the Cathedral ground was taken up by the massive main chapel, whose vaulted ceiling was lost in the darkness above. Small chambers flanking the entrance to it were usually taken up by chanters or other devotees, while doors from the chapel itself led into the Cathedral's infirmary (headed by the notorious Dr. Wu), the shop, offering various souvenirs for the discerning pilgrim, the buildings main power generator, High Elder Lasher's chambers, the base of the tower as well as access to the basement, where all the less useful things were stored...including the entrance to the Los Angeles Vault.

From time to time, Father Morpheus would come down from his chambers to give a speech to the gathered faithful. Sometimes, even a giant holographic image of the Master appeared, to the awe of the assembled.

The adjoining tower had three floors, where the Nightkin resided, as well as the more important members of the Children of the Cathedral, like high priests. Dane resided in a room on the first floor of the tower, while Morpheus, the leader of the Children, resided on the third, upper floor.