The Big Bend Tunnel is a location in the Cranberry Bog region of Appalachia in 2102. In 2103, it is being used by the Blue Ridge Caravan Company as a trade route.

The Big Bend Tunnel was a major railway passage underneath the Appalachians, allowing direct transit beneath the rock of the mountain. Although rail transportation was extinguished after the Great War, it still served the same role in the meantime, doubling as a shelter for those fleeing the carnage outside. The first permanent inhabitants arrived at the western end of the tunnel in January 2083. Some members of the Cutthroats, a raider warband from the Savage Divide, abandoned David Thorpe's banner in the wake of the Charleston Flood. The savagery was too much even for them to handle.[1] At first, the raiders stayed around the Ash Heap, salvaging Lewisburg and other nearby spots, until they finally stepped into the tunnels around September 2085 and started exploring them. At that point, the scorchbeasts already started emerging in the Cranberry Bog and their first encountered scared them off from exploring the Bog.[2]

By May 2088, supplies began to dry up on the west end of the tunnel, forcing the former raiders to explore the eastern end. They immediately encountered the Brotherhood, which set up a control perimeter at the eastern end to watch for traffic entering the region and help contain the scorchbeasts. Although the encounter was a shock at first, the Brotherhood was friendly and watched the eastern end, helping keep the tunnels safe. Furthermore, they revealed that some of the Responders survived the Charleston flood, lifting the spirits of the former highwaymen.[3] By 2093, the west end turned into a bona fide community, developing some small scale farming and trading with the Brotherhood for supplies. The relations were positively cordial at that point, as the Brotherhood was interested in making their allied community prosper, oblivious to their background. Even the once-bloodthirsty raiders were surprised at how they adapted to the new life they led.[4]

The lucky streak ended in the summer of 2095 when the Brotherhood realized that they were losing the war and made a desperate gambit to defeat the scorchbeasts. Melissa, the leader of the Brotherhood detachment, picked up and left without so much as saying goodbye, answering Knight Wilson's last call. This was an unpleasant surprise to the Benders, who soon realized that they needed to pick up the slack and fortified the eastern end with traps and killing zones to stave off the Scorched.[5]

The end came in the spring of 2097, following on the heels of two refugee raiders from the mountains. Broken and traumatized, they revealed that the Scorched overwhelmed and wiped out the raider gangs in the region. For the Benders, this spelled doom: They had barely hours to prepare for the Scorched flooding the tunnels. Strangely enough, the leaders of the community saw it as a form of justice, payback for the sins they committed as raiders. They faced their death with dignity, wiped out to the last man.[6] The story of the Big Bend tunnel continued, however, as the Fire Breathers under Melody Larkin attempted to seal off the tunnel and reduce the influx of Scorched into the western parts of Appalachia. Unfortunately for them all, the task proved too daunting - or the Scorched too numerous for the veterans of the wastelands to accomplish.[7]

The Big Bend Tunnel is an interconnected pair of long straight railroad tunnels running east to west, with a service and storage area which contains crafting workbenches at the midway point. The storage area requires a key which can be found in the side tunnel, south from the storage area.

It is a mostly linear location with two tracks running in parallel west to east, with loot on both ends. The tunnels have a limited number of dead-end side tunnels accessible through holes in the wall that offer minor loot and some brain fungus to harvest.

The important part lies in the middle of the tunnel, which contains a large maintenance junction for trains traveling through. The junction occupies the entire cavern, although the upper levels won't be accessible until the player acquired the key to the locked doors. The key is located down the tunnel to the south, excavated before the Great War. The key's located on the body of Sgt. Cominsky of the Fire Breathers, near the explosives crate. On one playthrough, the key was on the body of an unnamed corpse on a large piece of yellow mining equipment in the room just outside of where Cominsky is found.

The locked sections contain a vast array of items, including a power armor station and a random power armor set in the maintenance warehouse, a bobblehead at the clerk's desk, a magazine upstairs in the office pods (southeast), and of course, the steamer trunk. The locked area can be accessed without the key by climbing a series of boxes and jumping over the railing onto the catwalk that goes over the tracks.

The locked area can be accessed without the key by climbing a series of boxes and jumping over the railing onto the catwalk that goes over the tracks.

The Big Bend Tunnel appears only in Fallout 76. 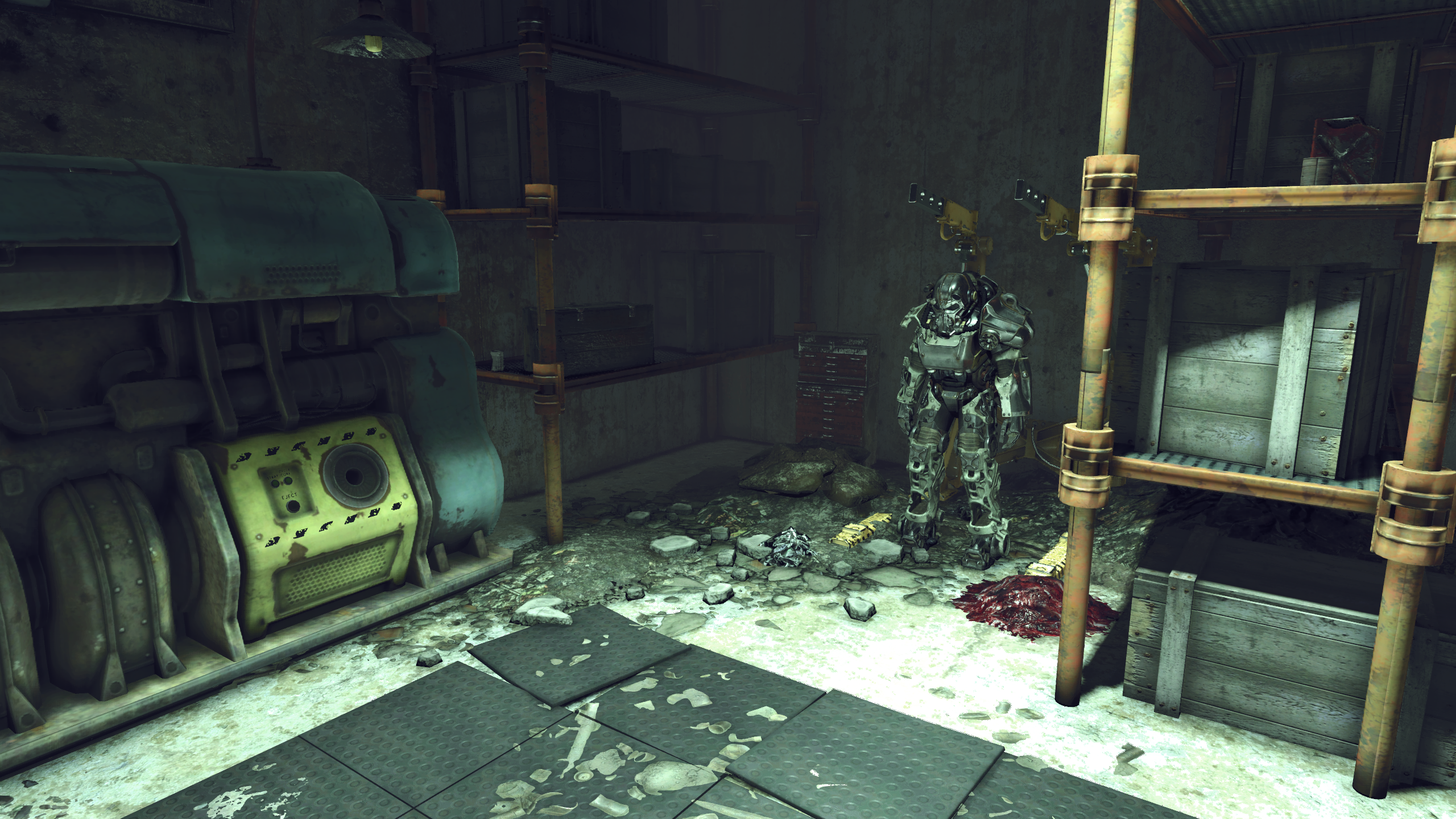