“他们为教主服务。他们想治愈这个世界，也给世界带来无法避免的痛苦。他们是暗夜中的天使，一边救赎，一边杀戮。Curiosity is a foolhardy emotion, but doubtly so when it comes to the Nightkin.”— Lasher, in Fallout

Nightkin can be found in the upper levels of the Cathedral, as well as inside the Mariposa Military Base, and in random patrol encounters in the cells around the base. After the Master's fall, many surviving Unity super mutants had become a chaotic wasteland wandering force, set on to destroy everything it encountered. They are superior to other super mutants in skill, equipment, and weaponry. Many of the nightkin are equipped with cloaking devices, such as Stealth Boys. The only gaming effect of this is to give them a slight ethereal look, as it does not affect the player's chance of hitting them.

After the death of the Master, parts of the super mutant army gathered and formed a new faction, led by Attis. Many years after their regrouping, these mutants captured the Secret Vault in order to use the FEV reserves stored inside. Attis' goal was to continue the Master's plan. His army had an elite unit of nightkin, much improved in skill, and equipped with high-tech stealth suits to enhance their abilities. These suits served the same function as Stealth Boys. These suits probably originated from, or were made in the Secret Vault.

There are some scattered in the waste in places such as Black Rock cavern.

那些追随塔比瑟的夜行族某种意义上可以算是“孤立主义者”，公开警告人类与黑山保持距离，并宣扬那些“可怕的斗牛”和“双头熊”有多么危险，当然其实就是指凯撒军团和新加州共和国。一个住在诺瓦克附近，为失眠症所困扰的夜行族每天晚上都会偷偷的来杀死一条双头牛，希望能够消除脑子里总是在干扰他的声音，他觉得这是那些双头牛造成的。He can be found during the day, cloaked behind a boulder across the road and to the west of town.Despite their phobia, some nightkin have become Antlerists, and take orders from their god, Antler, an inanimate brahmin skull located in the basement of the REPCONN Test Site.

The companion, Lily, is a nightkin and a former soldier in the Master's army.

Nightkin play an important part in the quest Come Fly With Me. The Courier is sent by Jason Bright, the founder of the Bright Brotherhood, to take care of "demons" that are infesting the basement level of the REPCONN rocket testing facility.

Similar to the super mutant in Fallout 3, nightkin will attack ghouls.

At Brooks Tumbleweed Ranch a nightkin will appear next to you and start chat. He will offer to sell the player wind-brahmin for all their caps. If the offer is declined, he will turn hostile and proceed to attack the player. If the player accepts the offer without asking about the price, no caps will be removed, and the nightkin will give a free Stealth Boy instead. Another Stealth Boy will be in his inventory available for pick-pocketing.

Another nightkin, Dog and his "human" personality God, appears in the add-on Dead Money. Although he does not use Stealth Boys, he is still a formidable fighter.

The nightkin appear in Fallout in the Cathedral and the Mariposa Military Base, in Fallout 2 as a hostile encounter on the world map, in the Secret Vault in Fallout: Brotherhood of Steel, and make a comeback in Fallout: New Vegas and the add-on Dead Money.

A nightkin without his Stealth Boy, as they appeared in Fallout 2

The nightkin class in Fallout d20. 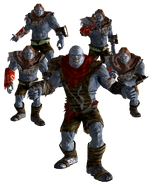 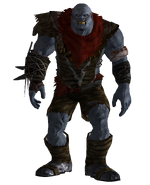