Discard to move across the map and perform an additional action 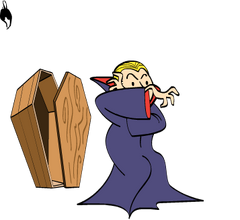 “When the sun is down, a Night Person gains +2 to both Intelligence and Perception (up to a maximum of 10). This perk directly affects your "internal clock" and remains active both inside and outside.”— Fallout 3 in-game description

Night Person is a perk in Fallout 3, Fallout: New Vegas, Fallout 4, Fallout 76 and Fallout: The Board Game.

As this perk only gives a temporary increase to the player character's statistics (unlike the Intense Training perk), it does not give an advantage when leveling up - there is no change to the number of skill points gained and the increased stats do not count for any perk requirements. Thus, the only effects are enhanced threat detection, Intelligence and Perception ability checks (in dialogue and elsewhere), and a bonus of +4 (or less if the player character's Perception and/or Intelligence is already higher than 8) to Medicine, Repair, Science, Energy Weapons, Explosives and Lockpick.

“You are a creature of the night! Though this doesn't allow you to spend Perk Points on perks you don't have the Intelligence or Perception to unlock, you do receive the impressive enhancements that a higher INT and PER allow you. For example, you have a greater distance to spot enemies and V.A.T.S. enhancements for Perception and the increase in XP that an Intelligence boost gives you.”— Fallout 4 Vault Dweller's Survival Guide description

“You are a creature of the night!”

Once obtained, the Night person perk can be discarded to move to any space on the world map. Once there, the player character may perform a fight, quest, or encounter action.

The night vision bonus may remain active while standing / during daylight hours (6:00 A.M and 6:00 P.M.). This causes the sides of the screen to be blurred when standing, and can cause things to be WAY too bright during daylight hours/indoors. Fixes (works on Console too):