Aliens are creatures found in the Mojave Wasteland in 2281.

Three aliens can be found to the north of Horowitz farmstead and east of Brooks Tumbleweed Ranch, where the mercenary camp is usually located, when one does not have the Wild Wasteland trait, with an inaccessible, crashed recon craft.

Aliens appear only once in Fallout: New Vegas and are identical in appearance to the aliens found in the Fallout 3 add-on Mothership Zeta. There are two aliens, both carrying tri-beam laser rifles.

The alien captain is a stronger variant of alien found in the Mojave Wasteland. Like the other aliens, he only appears if the Wild Wasteland trait is active. The captain is noticeably taller and more human-like in stature than the other two aliens, and appropriately has much more HP. The aliens appear to scale to the player character's level. The alien captain has the alien blaster in his inventory but does not use it in combat. If the captain is killed without the other aliens noticing, they will not become hostile but cannot be talked to.

Sometimes the aliens' eyelids will stretch, causing them to stick out.[已验证] 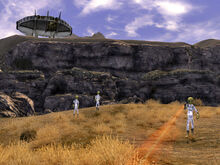 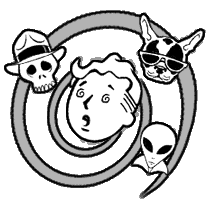