Aliens are creatures found aboard Mothership Zeta in 2277.

Most aliens encountered are either hostiles or workers. Hostile aliens sometimes have an inertia suppression field that acts as a shield and boosts their Damage Resistance significantly. In combat, they tend to hang back or rush the player character if they are using melee weapons.

Regular aliens wearing the white spacesuit are the most common alien the Lone Wanderer will see aboard Mothership Zeta. They act as the standard enemy of the area and will always be hostile towards the Lone Wanderer. Aliens have many tiers, depending on the player character's level. Tiers 1-3 do not have an inertia suppression field and the aliens tier 4-6 do. An alien that is wearing an I.S.F. has a body that shimmers and becomes slightly distorted.

† The inertia suppression fields protection depends on the level of alien using it.

The alien captain is the leader of the alien forces on mothership Zeta, equipped with a modified alien blaster and a shiny, gray spacesuit. Despite being the leader of Zeta's aliens, its stats are the same as the lowest-ranking aliens in the game, and its weakness in combat is compounded by its lack of an inertia suppression field. As the ship's captain, it has remote access to the mothership's shield and death ray power systems, and a big button in front of it that can fire the death ray.

Alien workers are the working force of the Mothership Zeta. Although displayed as hostile, they will never attack the player character, but will flee or cower in fear instead. Killing one results in a loss of 50 Karma, although this may not be the case if the player character is not directly involved, such as overloading the assembly when they are near it. During the quest Not of This World, when the Lone Wanderer first spots them, Sally will tell the player character not to hurt them because they are harmless. 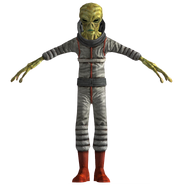 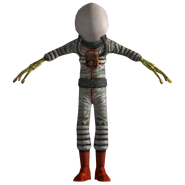 Alien with spacesuit and helmet 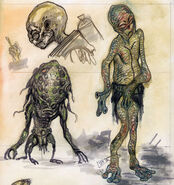 Aliens operate on the Lone Wanderer

Captive alien in the engineering core