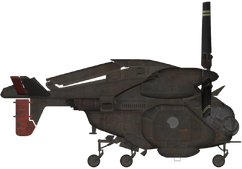 The Vertibirds utilized on the East Coast have transparent cockpits, sliding doors on the cabin, a pintle-mounted minigun on the left-hand side, and folding wings and rotors. The Vertibird also has a docking hook along the top near the tail, that links with the docking hook/arm on the flight deck of the Prydwen. Different from previous models is the model's retractable landing gear, in a different configuration with one along the centerline at the front of the aircraft and the other three in a tricycle layout at the rear of the fuselage.

Its armaments consist of two front-facing cannons and dual miniguns. There is one known model used by the pre-War United States Armed Forces and Arthur Maxson's Brotherhood of Steel, a bulkier transport model with a glass cockpit, retractable side doors, collapsible wings, and two additional jet engines behind the main cabin.

The Vertibird's VTOL flight mechanics allow it to approach landing zones with the speed of a fixed-wing aircraft and transition into a hovering mode of flight, by tilting its rotors vertically upwards 90 degrees.

Vertibirds lack the large armament package seen in the Capital Wasteland and are only armed with two fixed forward-firing machine guns and a crew operated minigun mounted on the left-hand side. When dropping the Sole Survivor off in an area inhabited with hostiles, the Vertibird will sometimes support them by firing on the hostiles with its machine guns.

Vertibirds are easily destroyed by all ranged weapons, and can be targeted in V.A.T.S. When a Vertibird is airborne and takes enough damage, it starts spinning on its Y axis, similar to how helicopters spin when they lose their tail rotor, before crashing into the ground and exploding, similar to a mini nuke explosion. The Vertibird usually breaks up into four large pieces upon crashing, releasing small amounts of radiation for a short while. However, if the Vertibird takes an immense amount of damage - such as a direct hit with a two-shot fat man MIRV or an upgraded explosive minigun - the Vertibird will slowly fall to the ground and pass through it. Marking with a recon scope can show its progress under the terrain.

Although the Brotherhood of Steel operate nearly all functional Vertibirds seen in Fallout 4, the Gunners also possess one functional Vertibird, which can be encountered in the southwestern portion of the map. They at one point possessed at least one more, which crashed into the Mass Bay Medical Center. The Minutemen and the Railroad may also come into possession of a single Vertibird. The Good Fighters have also managed to repair two Vertibirds and make them flightworthy.

The first Vertibird appears in the opening sequence of the game, flying over Sanctuary Hills and landing next to the entrance of Vault 111. Another Vertibird hovers over the Old North Bridge. Later, several crashed and wrecked Vertibirds can be found throughout the Commonwealth. Near the wrecked Vertibirds, power armor can commonly appear.

In The Art of Fallout 4, the Fallout 4 Vertibird is described as the "result of a goldfish meeting a Hind helicopter."[1]

Vertibird in the E3 showcase