“The XVB02 'Vertibird' is a VTOL ('Vertical Take Off and Landing') craft with an extremely durable armored fuselage and can be armed with a variety of offensive weapons and defensive countermeasures. This is the most advanced aircraft of its kind ever developed, and the military hopes to press them into service by 2085.”— Plaque at the Museum of Technology in Washington, D.C., Fallout 3

Vertibirds are mostly supporting craft, but they will attack in a few circumstances. They are a significant threat for a wide array of reasons, but the biggest is that they pack an enormous amount of firepower on an extremely well-armored chassis. Their weapons include a nose-mounted Gatling laser, a minigun on the left side of the vertibird for passengers, a pair of missile launchers, and a bomb rack for mini nukes. All of these weapons are threatening; the missile launcher deals heavy damage and can knock an opponent back, the Gatling laser can deal a lot of damage from afar, the minigun is used to mow down large amounts of infantry, and the mini nukes, used in airstrikes against heavy targets and emplaced defenses, can instantly kill a hostile.

The vertibirds one faces are usually set for a specific assignment - either dropping Enclave troops off or flying racetrack circles and providing fire support. Vertibirds on insertion/extraction duty are not capable of attacking, but their dropping off troops can be problematic, as Enclave soldiers are one of the toughest hostile factions in the Capital Wasteland.

Vertibirds tasked with fire support are the biggest threat, as they eliminate engaging hostile forces to back up Enclave troops on the ground. These vertibirds often perform bombing runs and make several passes to eliminate any resistance in the area. Vertibirds on these support flights may open fire with their missile launchers or Gatling lasers, though they do not use them as much as their mini nukes.

Vertibirds can sometimes be encountered on the ground. One instance is on the steps of the Capitol Building in the Capital Wasteland. In these cases, upon finding one of the parked vertibirds, there should be a cage containing a deathclaw inside. When engaged in combat, the Enclave officer nearest to the cage will often let the deathclaw loose.

In the Capital Wasteland, vertibirds can be destroyed with heavy ordnance, however, they cannot be targeted in V.A.T.S. The resulting explosion will scatter a great deal of debris, which will be visible to the player character. A vertibird explosion is significantly more powerful than that of a car or truck and will kill or seriously injure anyone nearby. The explosion can also kill disembarking Enclave troops, however, this can be unreliable due to bugs.

Vertibirds appear in the Capital Wasteland, along with the Enclave, after The Waters of Life quest. They are used by the Enclave for transport and fire support. Vertibirds will appear throughout the Capital Wasteland, deploying Enclave troops. A large number of vertibirds are seen fleeing the destruction of Raven Rock, with some crashing in the confusion. Vertibirds are encountered on the ground and in the air during the quest Take it Back!, with Liberty Prime and the Lone Wanderer (if equipped with heavy weapons) destroying them along the way to Project Purity.

In the Broken Steel add on, vertibirds appear at Adams Air Force Base as well as a captured one called Pride One. This vertibird was captured, studied, and modified by the Brotherhood of Steel between the recapture of Project Purity and the final Broken Steel quest Who Dares Wins. Pride One was studied and then modified by Scribe Vallincourt, with the only visible modification is the Brotherhood logo on both sides.

Several vertibirds are seen crashed on the Long 15. One modified vertibird, named Bear Force One, is seen transporting President Kimball to and from Hoover Dam.

An ex-Enclave vertibird is located in the Remnants bunker and can be seen in the battle for the dam, if the Courier convinces them to support their cause. A crashed vertibird also appears in the Mojave Wasteland, surrounded by unique to the location hardened sentry bots and Mister Gutsies.

When destroyed in Fallout 3, the wreckage uses a slightly different texture set, including rotor markings and the prototype emblem of the Enclave.

A gunship Vertibird outside Arlington Library

Brotherhood of Steel vertibird landing on mobile base crawler

Cockpit of a gunship variant

Inside of the vertibird 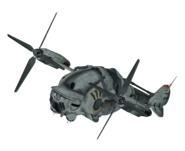 A winterized vertibird taking off in Operation: Anchorage 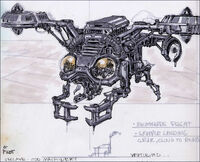 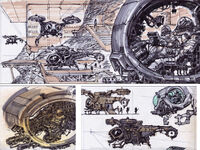 Rotors are designed with wing swivels "ala Harrier Jet"