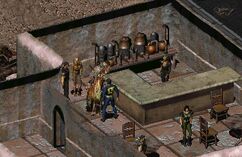 “Well, it should cause a regression in the genetic matrix that results in the destabilization and assimilation of abberant DNA, leaving the host free of mutagenic potential. If I knew for sure, I wouldn't need you to test it.”— Dr. Henry

Test mutagenic serum on a super-mutant. Try Broken Hills is a quest in Fallout 2.

With a Science skill of 80% or more, talk to Dr. Henry. Asking about cyber-genetics gives a mission to inject a super mutant with a prototype serum. Use it on a super mutant and record one's observations.

The serum will work on both Elmo and Marcus in Broken Hills, and any super mutants such as Grundel at the Mariposa Military Base. It will also work on Gond and Lenny in NCR town. Return to Dr. Henry and receive the option of adding a cyberdog non-player character (Robodog) to their party, subject to the normal party limit rules.