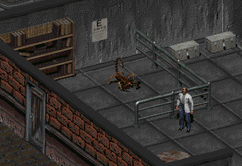 Defeat the professor's radscorpion in three challenges is an unmarked quest in Fallout 2.

The Chosen One can only win the Intelligence test, a chess game, by learning the "Flying Liver Attack" from Seymour after doing him a favor: digging him out and planting him near old ghouls' home. The other two test the Chosen One's Perception and Agility and are mere rolls against that attribute. You don't actually win, because the radscorpion always succeeds, but instead you get the experience when you tie. Killing the professor's radscorpion is bad for karma (-10), so to avoid that, after beating it in chess, just run out of line of sight, enter Sneak mode and exit combat; the scorpion won't remain hostile. Alternatively, letting one of your companions kill it prevents the karma loss.

Completing each challenge yields 500 XP. If the player completes the Agility challenge while having low Intelligence, the Professor will also give them a pack of Mentats.