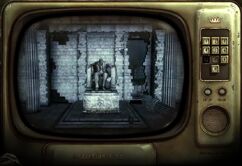 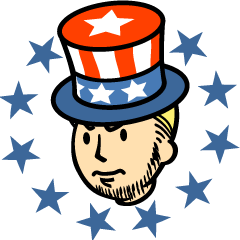 “Our abolitionist hero!”— Hannibal Hamlin after completion of the quest

Head of State is a side quest in Fallout 3. It is also a PS3 Trophy and Xbox 360 and PC achievement.

Talking with the Union

The quest is given to the Lone Wanderer in the Temple of the Union by Hannibal Hamlin. Hannibal wants to relocate his slave haven from the Temple of the Union to the Lincoln Memorial and restore the Memorial as a sign of freedom, despite the fact that it would undoubtedly attract unwanted attention. The quest may also be started after speaking with Leroy Walker or killing the slavers at the Lincoln Memorial.

The Lincoln Memorial poster is on a wall next to a desk at the top of the staircase which leads to the topmost level in the Museum of History offices area.

Alternatively, if the player character been to the Temple of the Union, they can tell the slavers that the slaves are hiding out near Old Olney (results in bad Karma).

Side with the slavers

Upon telling the slavers where the temple is, a battle occurs there if Caleb's section of the quest (retrieving the poster) has not yet been completed. In this case, the slavers will leave the memorial and run to the temple. It helps to fast-travel and do other things in the meantime as it can take the slavers over one in-game day to get there. Once the slavers arrive, one needs to speak to Leroy to trigger the attack. He can be found waiting under the highway west of the Temple of the Union. Several slavers will also appear sneaking outside the temple immediately after its location is revealed, but most of them will likely be killed by random encounters before Leroy arrives. Note: during the battle both Walker and Hamlin can be killed, causing the one to fail the quest.

One can also double-cross the slavers by killing them after selling out the slaves. Once the slavers are dead, one can continue on the original quest, helping the slaves.

Upon reporting back to Hannibal Hamlin that there are no super mutants in the Lincoln Memorial, Hannibal will gather up the runaway slaves and head for the memorial. He will tell the player character he and his team will start off within the hour. Once Hannibal's crew all leave the temple and travel a bit down the road, the player can then fast travel to the Mall Northwest Metro Station, where Hannibal will eventually arrive. It is recommended to wait 24 hours at the meeting location.

If the player character escorts the group, they can, along the way, tell Hannibal to "Wait here, while I scout ahead." He will wait for 6 game hours and then continue on his journey, with or without the player character. When one has cleared a path for them, Hannibal can be told "It's safe now." and they will resume the trek.

The waypoint will show that one needs to meet Hannibal at the Mall Northwest Metro Station. Upon arrival, Hannibal will thank the player character. The group will then proceed to the memorial and the quest will be completed.

Battle at the Lincoln Memorial

In the event that the slavers still occupy the Lincoln Memorial when Hannibal Hamlin and the runaway slaves arrive, they will ask the player character to help them kill the slavers. If one does not tell Hannibal to wait while they check it out, then Hannibal will lead the runaway slaves in an assault on the Lincoln Memorial. Hannibal is usually killed, which will fail the quest. However, if the one tells Hannibal they will "investigate" the Memorial, Hannibal will wait. This method will allow one to go into the Memorial and kill the slavers that occupy it. Then, when one reports back to Hannibal, there will be no one to kill Hannibal when he leads the charge and the quest can be completed.

The eight Lincoln artifacts can be sold either to Hannibal Hamlin, Leroy Walker, or Abraham Washington.

Selling at least one artifact to Leroy Walker will grant one access to the memorial without being shot. Just ask him if one can peek around the memorial.

Siding with the slaves

Siding with the slavers

Lincoln Memorial poster in the Museum of History 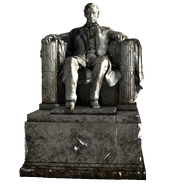