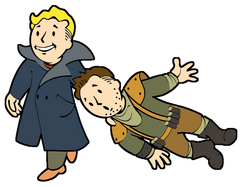 Synth Retention is an Institute main quest in Fallout 4.

Speak with Father about the Institute, he'll request help dealing with a renegade synth turned raider at Libertalia. There will be a Courser companion at Nahant Wharf who needs to be collected first. Once he is collected, fight along the network of ships until the target is reached. On entering the cabin, X6-88 will initiate conversation and provide Gabriel's recall code.

On reaching the top of the ship Gabriel will initiate conversation, no matter what a fight will break out. Using the synth's factory reset code will disable Gabriel and keep the fight limited to a few raiders. There's a couple of persuasion checks that give extra choices like the password for the Master locked terminal that can open a nearby safe. Once the fight is over, X6-88 will teleport out with Gabriel.

The player can simply kill Gabriel, much to X6-88's dismay. This option will require extreme speed and luck. Another option to kill Gabriel is to toss two bottlecap mines before ending the dialogue. Or, deploying mines at the top of the ship where Gabriel is confronted will kill him and his crew before the screen is even loaded. Another possible option is to move away from Gabriel, making sure to bring along X6-88 so he doesn't call out the recall code. Yet another option is to switch to V.A.T.S. right after entering the rooftop and kill Gabriel using a Fat Man. Moving to the top of the ship, above the terminal and safe to the plank will make them hostile, allowing the player to kill Gabriel. This will also trigger different dialogues from many of the Institute scientists and Father.

On returning to the Institute there will be another discussion with Father, he'll provide quarters. Upon entering them the mission is complete and The Battle of Bunker Hill begins.

There appears to be a disconnect between the affinity changes generated and the actual spoken responses, for many of the companions. For example, Nick "loves" saying it would be more humane to kill Gabriel than use the recall code, but Nick states "I think you and I got real different definitions of 'humane,'" which implies he shouldn't like this choice. Further along, Danse "hates" refusing Gabriel's bribe or electing to take his loot by force, yet his spoken responses are "A wise choice, soldier," and "This is going to be a pleasure," respectively. As far as actual gameplay is concerned, any affinity changes calculate as stated, so this is likely a developer oversight.