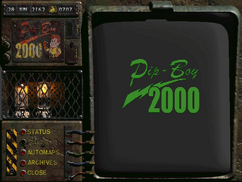 The RobCo PIP-Boy 2000 is one of the models of the 个人信息处理器 electronic device series manufactured by RobCo Industries. It is a very specialist piece of pre-war equipment that was used primarily by travellers. The Pip-Boy holds a surprisingly large amount of information and can transfer data to and from holodisks and from data tubes. It displays information in bright green on its black 5" x 3" screen. It can record sound and video footage for later playback. If left alone in the main screen, a screen saver of falling atom bombs can be seen. On January 1, the Pip-Boy 2000 will wish you a 'happy new year', on November 28, a 'happy thanksgiving', and on April 1, a happy 'all fools day'.

Its primary uses are monitoring the user's health and mapping the surrounding terrain via powerful satellite uplinks (where available) and sonar imaging (with the option to call up large map blocks of several hundred miles). Other features include a buddy chat program, timer and alarm function, cabling extensions to motion sensors as well as a personal log system, reading material storage and even simple games.[1]

Input is slow, but a patient user can master hand-entering and editing text messages on their Pip-Boy 2000s. Pip-Boy 2000 came in several versions, as a hand-held device[2] or one worn on the arm. One of the wrist-worn models was owned by the Vault Dweller and later the Chosen One.[3] Warrior in Fallout Tactics uses a Pip-Boy 2000 with a "B.E." stamped onto it. This could mean Brotherhood Edition. The B.E. version contains many new and/or modified features of the original Pip-Boy.

The character shown in images that illustrate the characteristics of the SPECIAL character system (Perks, Traits, Stats etc.) is often incorrectly called Pipboy (even in Fallout Tactics). His real name is Vault Boy.

The Status will display any quests the budding adventurer in you has been attempting to perform. Completed quests, if any, will be crossed out, but still visible, to provide that "good feeling" in you when checking back the Status. Replaced with "Briefings" in Fallout Tactics which contain an audio file of a briefing and the same file as text.

Advances in terrain renderization allow the PIP-Boy 2000 to store automaps of any location you visit during your journeys. The Automaps button will display all of the automaps the PIP-Boy 2000 has in its memory. Replaced with "Maps" in Fallout Tactics that contains a full-color image of the area and information on the specific parts of the map.

Including a video recorder, the PIP-Boy 2000 saves filmic events that might occur. Here you can watch them all again, in full playback mode!

In Fallout Tactics the feature works exactly the same with some videos available. The include:

In the Pip-Boy which belonged to Vault Dweller, this button is broken. Its name was visible only in the Fallout demo, and the demo's files revealed that it was intended to keep track of various clues the player receives, much like a journal.

The Close button will power down your PIP-Boy 2000 and release you from its high-resolution monochromatic graphics.

In Fallout 2, there are enhancements that are designed only to work with PIP-Boy (which the Chosen One happens to have). The game contains two such enhancement modules, Linguistic and Medical. Both of these are obtained in New Reno, with the medical enhancement being one of the most obscure items in the game. Both of the enhancements are one of a kind.

The Warrior in Fallout Tactics uses a toned down version of the original Pip-Boy, used by the Midwestern Brotherhood. It uses the same Green & Black configuration as the original, but with higher resolution. The B.E. version also contains support for full-color map files and high quality audio briefings. The B.E. version also contains a slot for the calendar-clock and an alarm, but the slots are empty. These could have been removed by the Brotherhood or it could have been a developer oversight. The B.E. probably stands for "Brotherhood Edition".