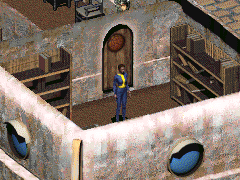 Joanne as she is seen in-game

“What? You destroyed the plant?! The contamination! You IDIOT. At least those ghouls are gone... Get out of my sight.”

她成為避難所市的領袖已經有很多很多年了，因而也懂得荒野世界的情況有多麼糟糕——但她從來不同情那些向避難所市尋求保護的那些無家可歸的人們，反而認為這些人不夠強壯，不夠聰明，是劣等人，沒資格進入地下掩體市。她喜歡努力地工作，並把她所有的時間當成一種財富，所以她對於無目的的社會交際從來不感興趣(如果那不屬於政治上必須參加的交際的話，她寧願去工作)，並且把人們的順道來訪看成對她時間的浪費。Though Mentats are banned in Vault City, one can attempt to steal and discover that she carries some.

She is so single-minded that when informed of the Enclave's defeat she merely inquires as to the strength of their power armor and how it could help solidify Vault City's supremacy.

It is important to not be rude to Lynette, even questioning Vault City's policies and her decisions can result in the Chosen One being thrown out of Vault City for good, cutting off several important quests. Even if the player character attains citizenship, Lynette will still revoke it and exile them if upset. Therefore, never question Vault City's usage of "servants", claim to agree with Thomas Moore or suggest his murder, do not ask about Vault City's attitude towards outsiders, nor suggest Vault City and Gecko cooperate. Doing any of these things can result in loss of welcome.

Joanne Lynette appears only in Fallout 2 and is mentioned in the Fallout Bible.

"We no longer consider ourselves to be "Vault Dwellers"... we refer to ourselves as "Citizens." If you wish to become part of our community, you must first prove your worth."

"The problem IS that all Outsiders wish to join our society, which is simply not feasible. We would undoubtedly sink into the same anarchy which plagues the outside."

"What? You destroyed the plant?! The contamination! You IDIOT. At least those ghouls are gone... Get out of my sight."

"We exited the Vault 120 years ago and, with the help of our Eden kit, began construction of Vault City. Ten years later, the Overseer retired and a Council of Citizens was established. The Council appointed the initial First Citizen."