這是用來展示玩家背包物品的。The menu also displays total caps and carry weight at the bottom of the screen. It is sorted into seven tabs:

機器上有一個插頭，用來連接動力裝甲，也可開啟波士頓地區避難所的大門。也可用來控制機器人 if the Robotics Expert perk is active. 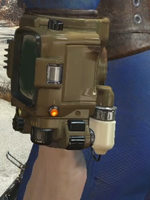