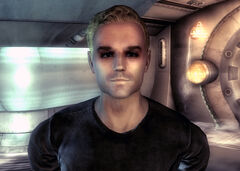 “I'm sure there's a great deal that our two species can learn from <zap> Oww! What the Hell? What is this, what are you doing?”

Colonel Hartigan is an astronaut found dead in Mothership Zeta's engineering core in 2277.

Hartigan was returning from a low-orbit mission in his capsule Clarabella 7, but he never made it back to its ocean splashdown rendezvous point. The mystery was soon covered up by the U.S. government and the United States Space Administration, who claimed the craft crash-landed after becoming entangled in high-altitude weather balloons. Hartigan himself soon made the first contact with the aliens and attempted to calmly explain his mission. His screams can still be heard echoing through a recorded log on the ship. He was placed in a cryogenic stasis pod, but complications and pod malfunctions, plus the stress he endured during his alien encounters, caused the colonel to expire. His spacesuit is still functional, however.[1]

His space pod can be found in the research lab.

Hartigan appears only in the Fallout 3 add-on Mothership Zeta as a corpse.

The name of Hartigan's space capsule, Clarabella 7, is a reference to the American Mercury program.