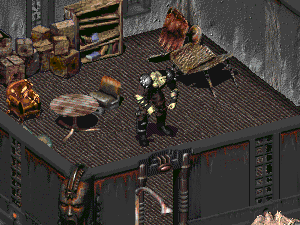 Harry is a Mariposa super mutant stationed in the Watershed in Necropolis in 2161.

Harry is the leader of the super mutants protecting the water shed in the Necropolis. He is also a spy, keeping a close eye on Set for the Lieutenant. He is on alert for any "normals," whom he will try to capture and take to his boss.[2]

Harry is a mind-numbingly stupid super mutant. He appears as most Mariposa super mutants do, with a large leather strap holding his upper lip in place. And, like the other mutants, he was dipped in the large vats of toxic FEV. Judging by his overall lack of intelligence, he was probably one of the unlucky humans that lost a portion of their brain mass during the transformation.

He is part of a small squad of mutants that the Master sent to the Necropolis watershed. These mutants were to assume the role of guarding Set and his ghoul minions, for the time being. Their orders were to stay dormant, until the Master gave the 'order' to attack the ghouls, and take the city's water. This would be a strategic move to kill off the remaining ghouls, and get a steady supply of water to use in the name of the Unity.

If the Vault Dweller decides not to destroy the Super Mutants at the Watershed for Set and the city, Harry and his mutant comrades later move in to the Hall of the Dead, and slaughter the ghouls.

According to the Vault Dweller's memoirs, Ian died in a fight with Harry; most likely by his brother, Barry, who burnt Ian to death.

Harry appears only in Fallout. He is also mentioned in Fallout 2 as one of the possible answers to the Bridgekeeper's first and third questions (name of player character and who survived to appear in the sequel) and is mentioned in the Fallout Bible.