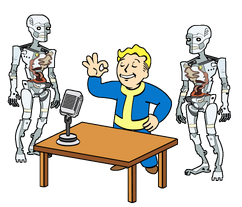 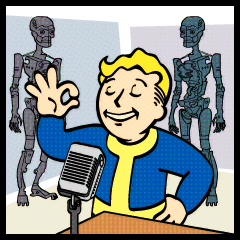 “It is time to announce our presence to the Commonwealth, to request they do not interfere with our plans. You should be the one to do it.”— Father

When teleporting to the Institute, one must talk to Father. He will ask the player to deliver a speech at a microphone beside a terminal near him. He gives an announcement script which one can dictate. After recording, he will then give the Sole Survivor the task of going to Diamond City to boost the range of Diamond City Radio. Once arriving in Diamond City, head over to Travis's shack where he broadcasts from. When entering his shack, look on the floor for a box of radio things for his transmitter gear.

After placing the agitator in the reactor, one must activate it using the terminal nearby. The door to the reactor will close and the player character must then talk to Father. He will ask the player attend a board meeting as the director. At the board meeting the future plans of the Institute will be discussed.

One has to decide whether to tell Allie Filmore to focus on further development of synths, weapons, or to surprise them. When the meeting concludes, this quest will finish and the quest End of the Line starts automatically.