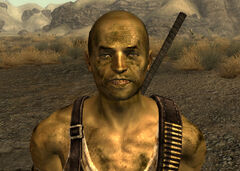 Driver Nephi without his helmet

“He's fast and he's brutal. Killed about a dozen of my men with a goddamn driver iron. Hence his name.”— Major Dhatri

Driver Nephi is a leading member of the Fiends, serving under Motor-Runner. He lives in the southwest corner of the Fiend compound around the South Vegas ruins east entrance in 2281.

Driver Nephi can be found alongside six other Fiends in a burned-out building north of the Samson rock crushing plant, and south of the South Vegas ruins east entrance. He is nicknamed for the unique golf club he carries with him into battle, Nephi's golf driver.

Nephi is on Major Dhatri's hit list for the quest Three-Card Bounty. Dhatri states that 1st Recon had previously been sent to kill Nephi, but proved unsuccessful after multiple attempts, as Nephi tends to use his own men as meat-shields to protect himself, and is also tough enough to have managed to survive despite 1st Recon snipers having managed to land at least a couple confirmed shots on him.

Major Dhatri also warns that Nephi is exceptionally fast, having earned his nickname by managing to kill a dozen armed NCR troopers in melee combat before they even knew what hit them. In fact, he moves 25% faster than a normal human non-player character. Bert Gunnarsson will comment on Driver Nephi's passing after his death, but will not elaborate further on any prior relationship he had to Nephi or the Followers of the Apocalypse.

Like many Fiends, Nephi dabbles in the slave trade, and did business with Dermot and Saint James on at least one occasion. It was he that purchased the little girl and her family that went missing from Aerotech Office Park, giving 400 caps for the little girl's sister and 150 for her brother. He only paid 50 for the little girl, however, despite Dermot's best efforts to convince him to pay more and to wait until the girl got older.

Driver Nephi is not marked as a respawning non-player character in the GECK, but scripting issues may rarely cause him to respawn some time after killing him. [已核实]