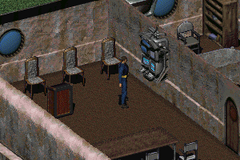 “It's the economic data disk that proves that Gecko and Vault City must both work together in order for either of us to survive. Are all of you smoothskins such smallbrains?”— Gordon

Retrieve the Economy Disk and deliver it to McClure in Vault City is an unmarked quest in Fallout 2.

After finishing Optimize the powerplant, go speak with Gordon in Gecko junkyard. He will tell you that after the powerplant is optimized, Gecko can sell excess electricity to Vault City for medical services, and ask you to deliver some economy data to McClure in the Vault City in hope of making a business agreement.

The quest can be started even before repairing the powerplant, but the economy data cannot be given to McClure for the reward until after the powerplant is optimized.

Sometimes you cannot give the Economy Disk to McClure, effectively preventing the Gecko good ending. This has occurred on patch 1.02, and can be fixed by installing a patch.[已验证]