Fort Defiance, formerly known as 阿利根尼精神病院, is a location in the Cranberry Bog region of Appalachia in 2102. It is located west of Watoga and east of the monorail elevator, on the edge of the boundary with the Savage Divide.

Originally built in the mid-19th century to provide treatment for the region's mentally ill, based on the theories of Thomas Story Kirkbride. The Kirkbride Plan maintained that the environment which provided natural light and circulation was essential to the healing of the mind, and so adopted a unique, "bat wing" floor plan with wings sprawling outward from the central building and used to house the patients. The building was intended to care for under three hundred patients, but even exemplary planning and performance by the staff was insufficient with occupant numbers closer to three thousand by 2061. The resulting horrible conditions in the hospital were amplified by neglect on part of the personnel and caused undue suffering for the patients.[1]

The truth of the conditions at the Asylum was revealed in an expose by Eleanor Tarquin of the Charleston Herald, who volunteered to go undercover and learn the truth - following the trail blazed by Nellie Bly with her landmark investigation of the Women's Lunatic Asylum of Blackwell's Island. A month spent in the facility revealed horrific mistreatment: Many of the asylum patients may have been misdiagnosed and institutionalized without a significant presence of mental health issues. She reported that patients were kept restrained for long periods of time in tight confines with other patients. They had breaks from this imprisonment only for treatment, meals, and sleep. Treatment was largely forcing patients to be immersed in ice cold water. Basic needs were fulfilled at the lowest possible criteria, with no process for patients to request humane accommodations for things like vegetarian meal plans or additional blankets.[2]

Before she could commit her experiences to paper, she still had to be released from the Asylum. In Bly's case, it was a relatively simple matter organized by her paper. However, Tarquin's editor had to file multiple times for her release from the institution into his care. Apart from putting the daring journalist through unnecessary misery, it also indicated that family members who were willing or able to care for relatives in the facility were left in the cold because they were unable to pay for fees associated with the release procedure. The intent of Miss Eleanor's assignment was to remain in the facility for ten days, but even with aggressively documented and funded attempts to release her, she remained in the facility for a month - all the while any interested individual could pay the hospital for a guided tour of the facility. Ostensibly this was intended for doctors and health professionals, but this was not always the case: Family members were not allowed to visit patients unless they could pay for this expensive and secretive "Lunatic Tourism" offering, and there was no guarantee that they would be able to see their family member without paying additional fees.[2]

Once the article was released, the revelation of the Asylum being used by its management as a money-making scheme and the abuses perpetrated in the name of "healing" forced its closure. However, although the Asylum closed down on March 17, 2061, the effect on the patients' welfare was marginal. Patients who didn't qualify for a move to Watoga's facilities were discharged en masse with only a perfunctory attempt to contact their living relatives. Hospitals and doctors throughout the region were suddenly overwhelmed with all of the cases that they had quietly swept away over the years, and unsurprisingly some just swept them away again.[2] This caused a massive swell in the region's homeless population, resulting in a public health crisis - swept under the rug by Watoga and the rich as a problem that did not affect them.[1]

As for the people responsible for these heinous acts, like Doctor Kessle and the rest of the hospital administration? No charges were pressed against them, even as the already high population of homeless, itinerant workers in the region swelled. The stigmatized mental patients were further victimized by the endless media coverage about the threat that they posed to the region.[3]

The Great War saw the closed-down Asylum gain a new lease at life for a few months, as a field trip organized by Clara Duran, the history teacher from Watoga High School, became the new tenants. The Asylum was still fully furnished, with numerous facilities to ensure its self-sufficiency, including a water treatment plant, dairy, and of course, strong walls with intact windows providing shelter from the deadly Appalachian winter.[4] By January, having survived the winter, the former Watogans were looking at a brighter future thanks to intense training, a dairy cow captured the previous year, and even some chickens. They were even starting to make forays into other survivor communities to trade the chem stock found at the Asylum for essential supplies. Barring domestic issues, things were looking good.[4]

Their luck ran out in March 2078. The fledgling collective was attacked by a group of raiders from the bog town north of Watoga, killing the dairy cow and all the chickens for meat, then taking off. The Allegheny survivors split into two groups in the aftermath. One half left for Monongah, unwilling to continue working with Watogans. The other half, uniting behind Duran, decided to make a break for Harpers Ferry and beyond to look for survivors there.[4]

The Asylum lay abandoned for several years, until the Appalachian Brotherhood of Steel moved in to secure the premises, in order to use the building as headquarters for their expanding organization. Renamed Fort Defiance, it served as headquarters for the newly-established Appalachian branch of the Brotherhood of Steel.[5] It continued to thrive, eventually becoming part of the front line established to contain the scorchbeasts. However, Defiance has fallen, not due to a lack of martial prowess, but due to the Brotherhood's reluctance to work together with the Responders and Free States. Isolated from the rest of Appalachia, Fort Defiance fell in a daring last stand on August 18, 2095. Its bounty would lay undisturbed until 2102 and the emergence of Vault 76 dwellers.[6]

The outer courtyard contains a large fortification surrounding an automated surface to air missile and a sonic generator which must be defended during Line in the Sand. The guardhouse at the gates contains a fixed hunting rifle spawn, while the dead paladins within will typically carry weapons and have another weapon spawn by them. The entire area is filled with feral ghouls and Scorched.

Fort Defiance's interior consists of four floors with the fourth one only accessible through an elevator protected by a laser grid which is unlocked by completing Recruitment Blues and obtaining a military ID card.[7] The right wing is infested with feral ghouls and is mostly in disarray because the Brotherhood never decided to repair and clear out that section. A wendigo spawns in the room with the breaker panel.

The main entrance leads to the hallway flanked by two offices for the staff (and the Brotherhood after the takeover). Until the player gains access to the Brotherhood areas, they can only explore the derelict southern wing of the Asylum.

The southern wing encompasses three floors filled with the remnants of the asylum's dark past and the survivors who tried to make it their home. Among the derelict cells is a power switch that activates the doors leading into the northern wing of the facility, which was used by the Brotherhood of Steel as headquarters. The three floors include numerous storage rooms, personal rooms, and workbenches.

However, the top floor, where Paladin Taggerdy's office is located, is inaccessible until the player becomes a member of the Brotherhood of Steel during Recruitment Blues. The final room, containing the Paladin's chambers, does not become available until the player locates Taggerdy's ID in glassed cavern during Belly of the Beast.

Scorched occupy the outside of the building while feral ghouls occupy most of the first and second floors while the third floor is infested by multiple radroaches and a few ants as well as multiple bloodbugs and possibly bloatflies and mole rats. The real danger of this area however is the upper floors which are patrolled by a wendigo that can sometimes stray to the bottom floors.

Fort Defiance appears only in Fallout 76. 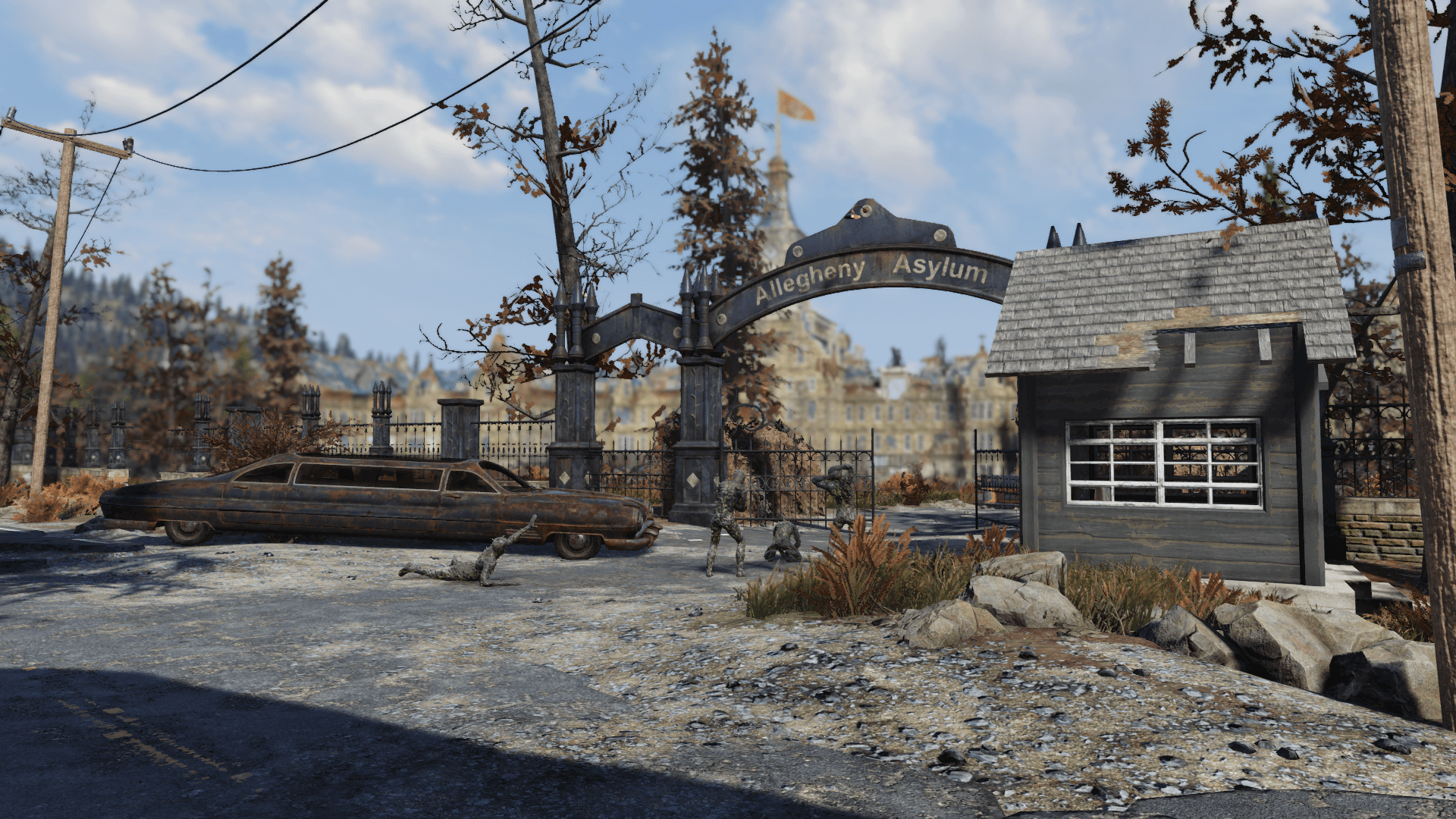 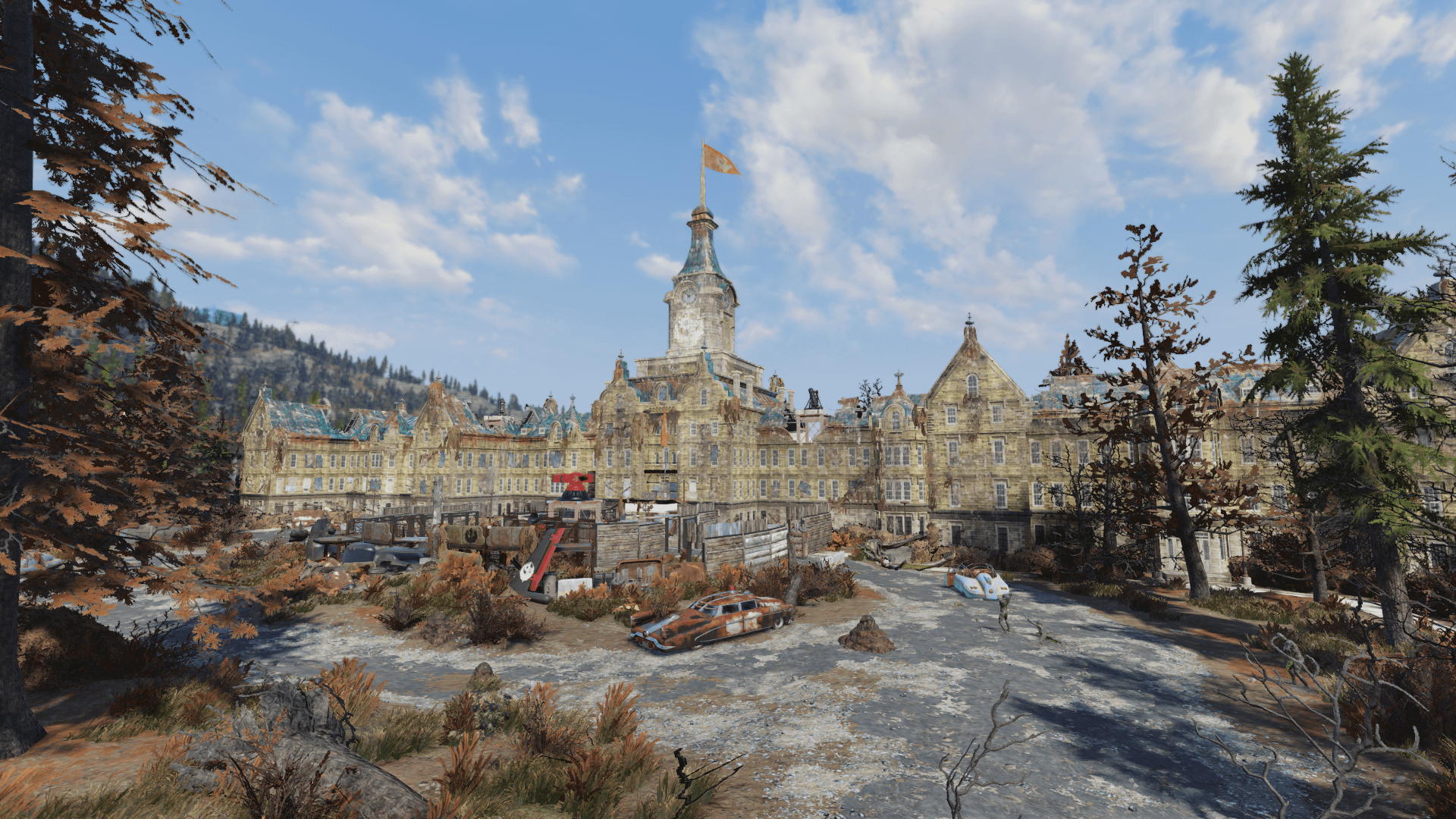 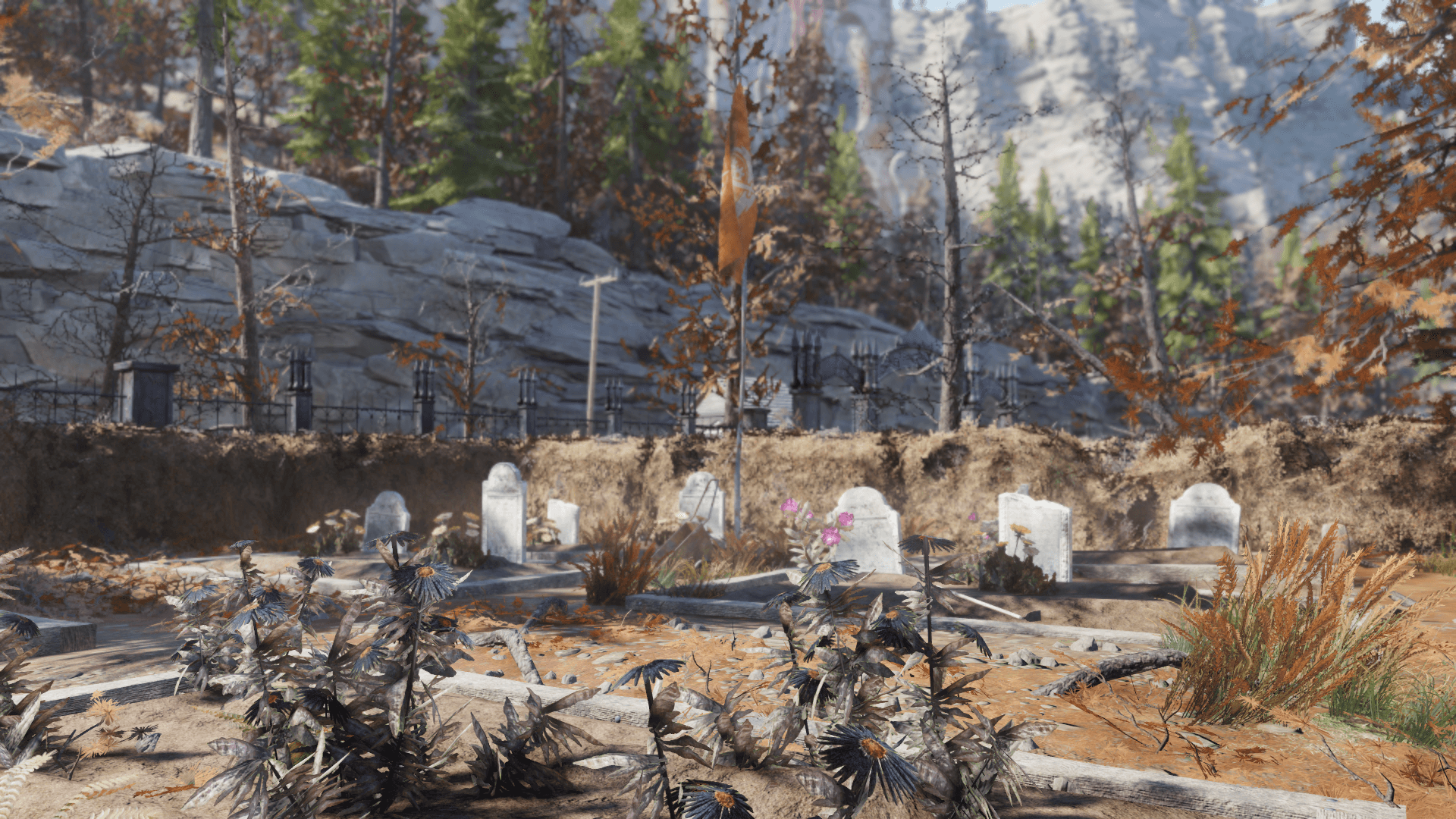 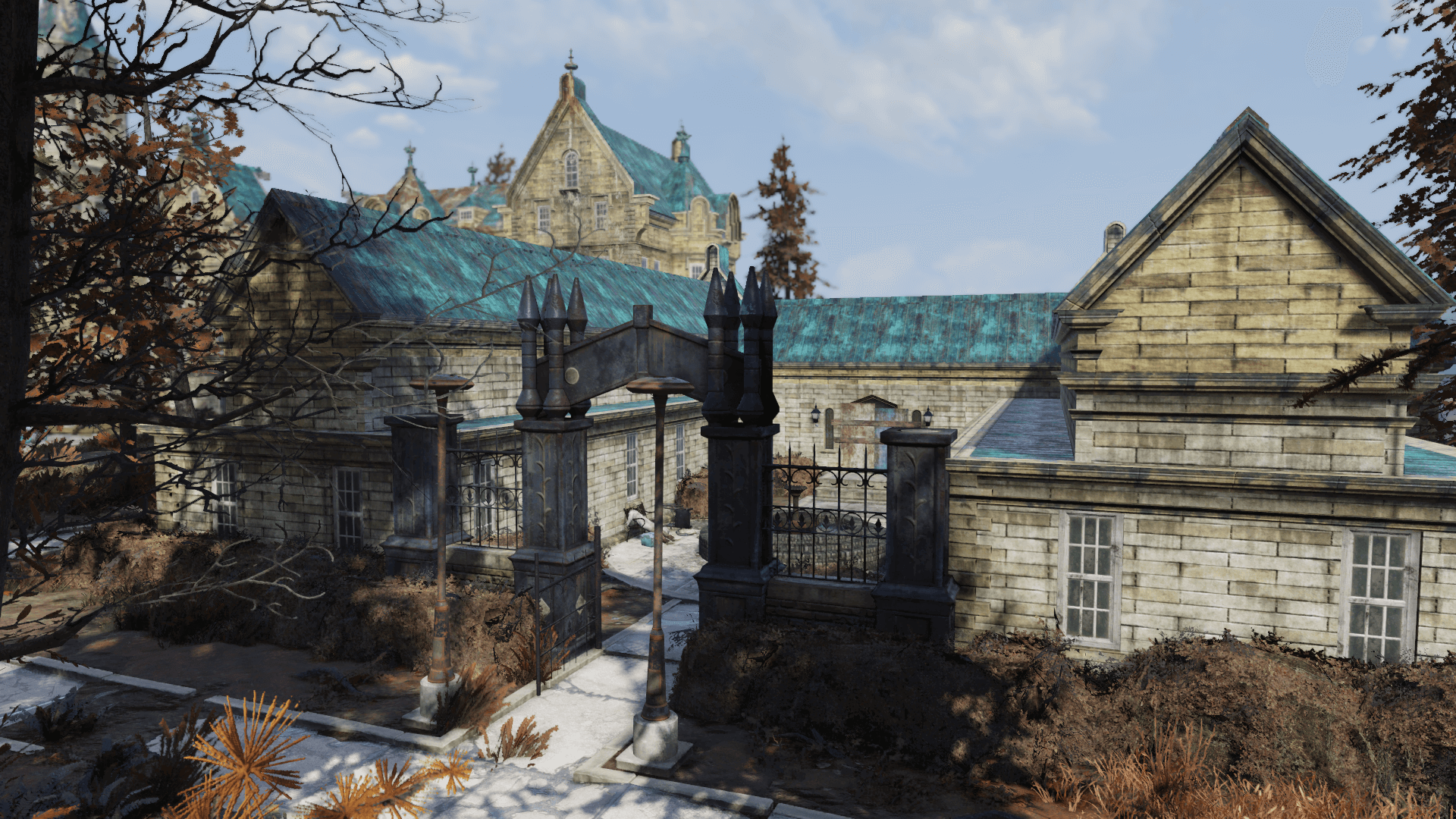 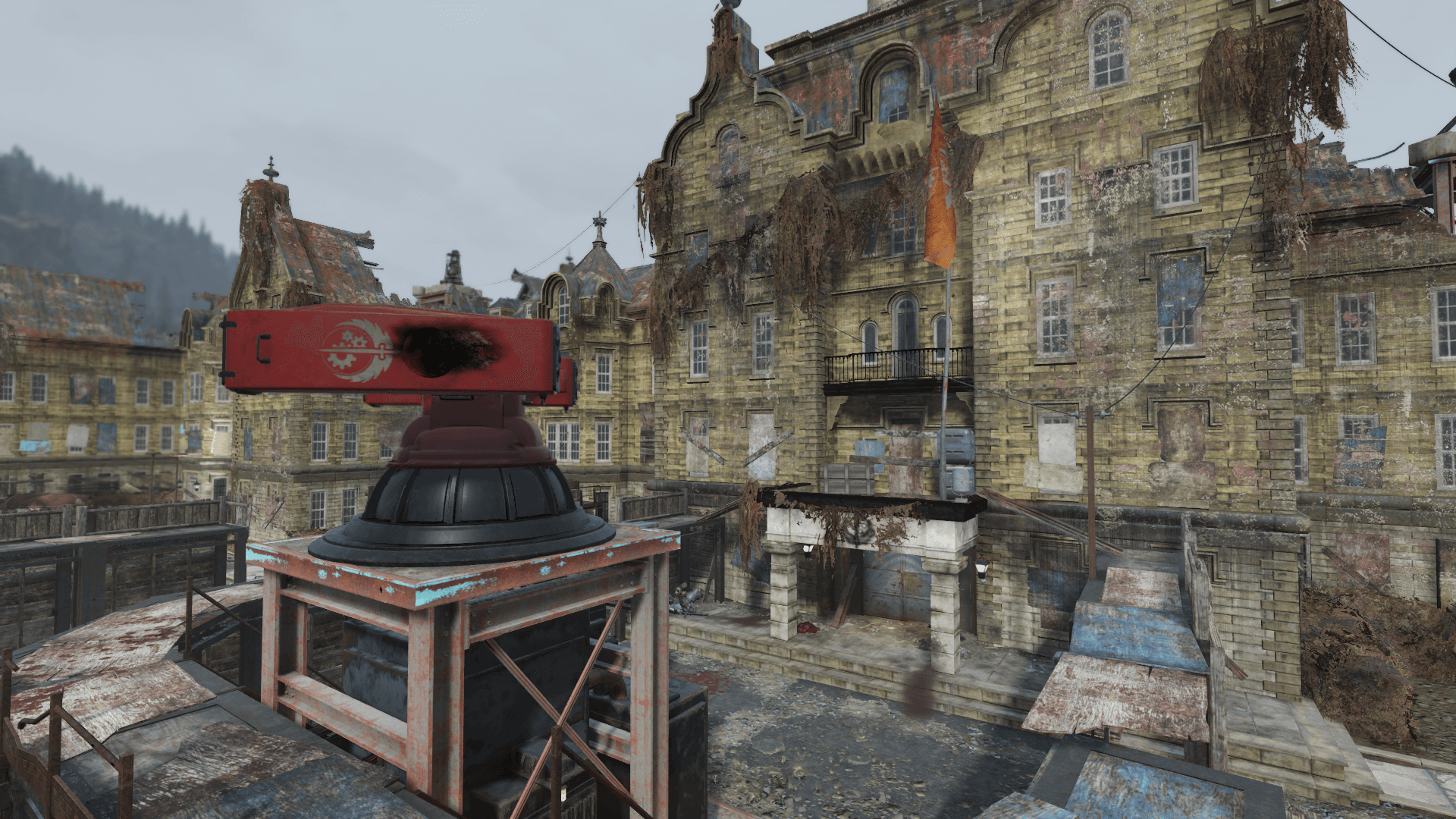 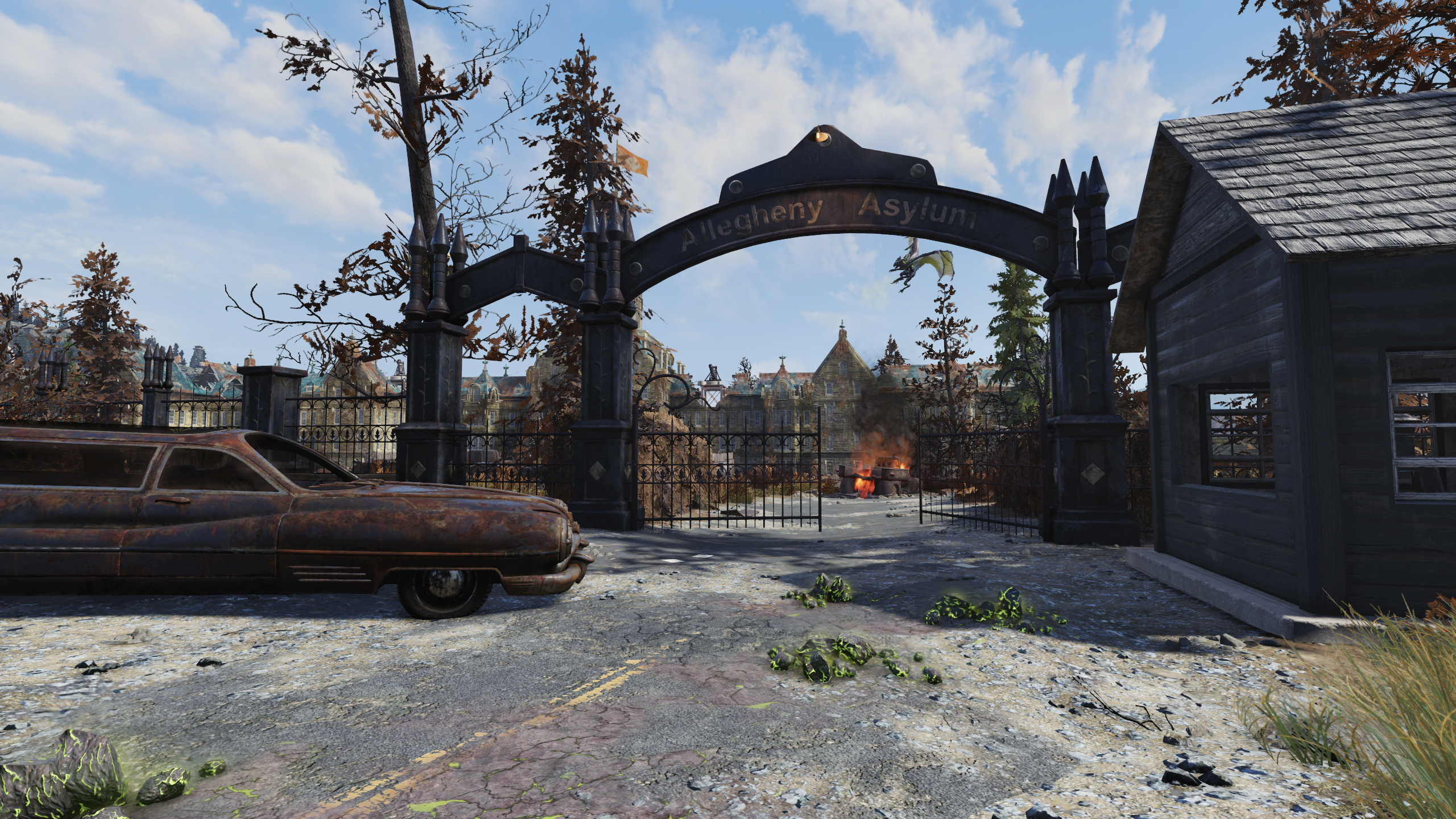 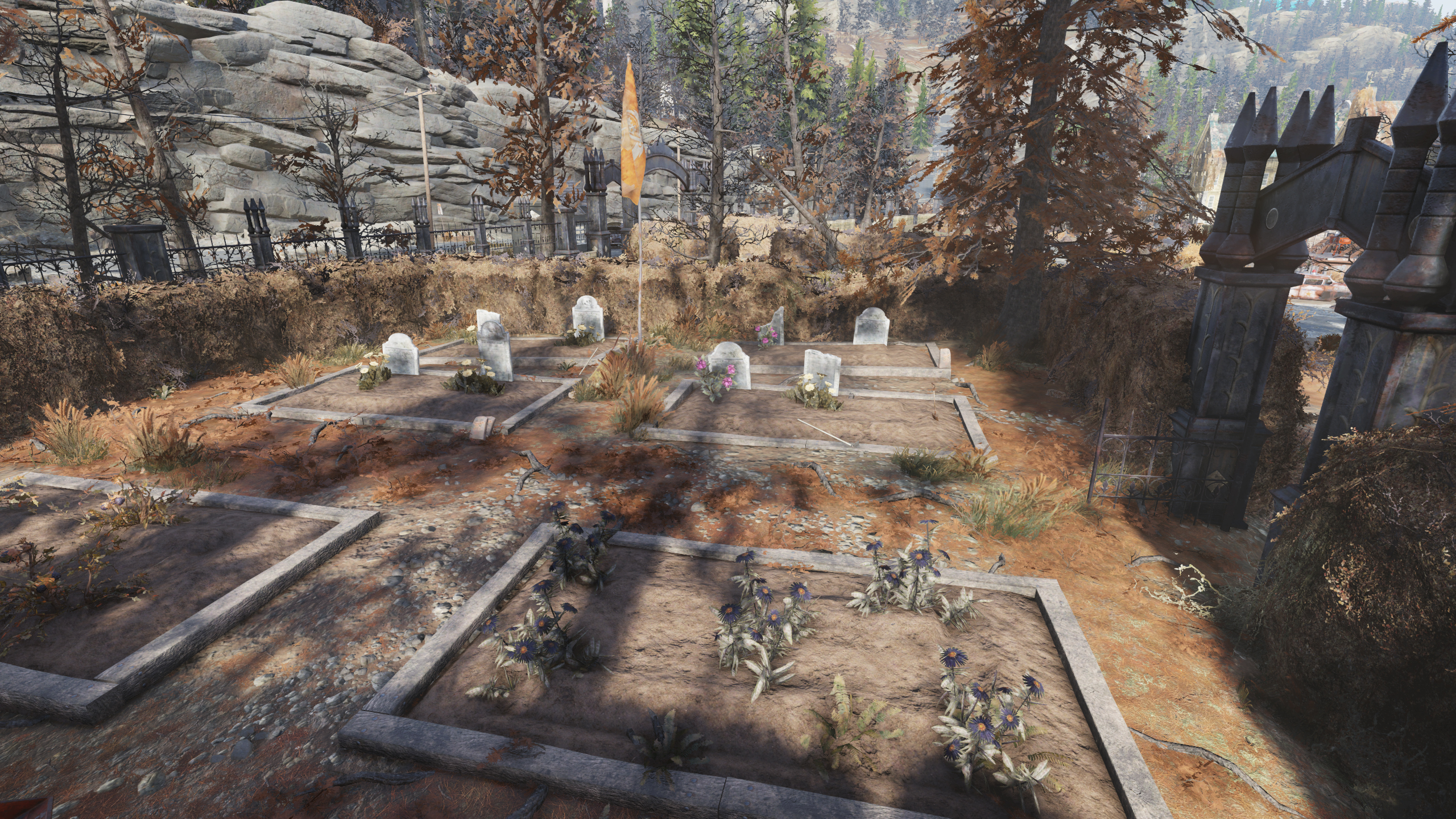 The Cemetery at Allegheny Asylum 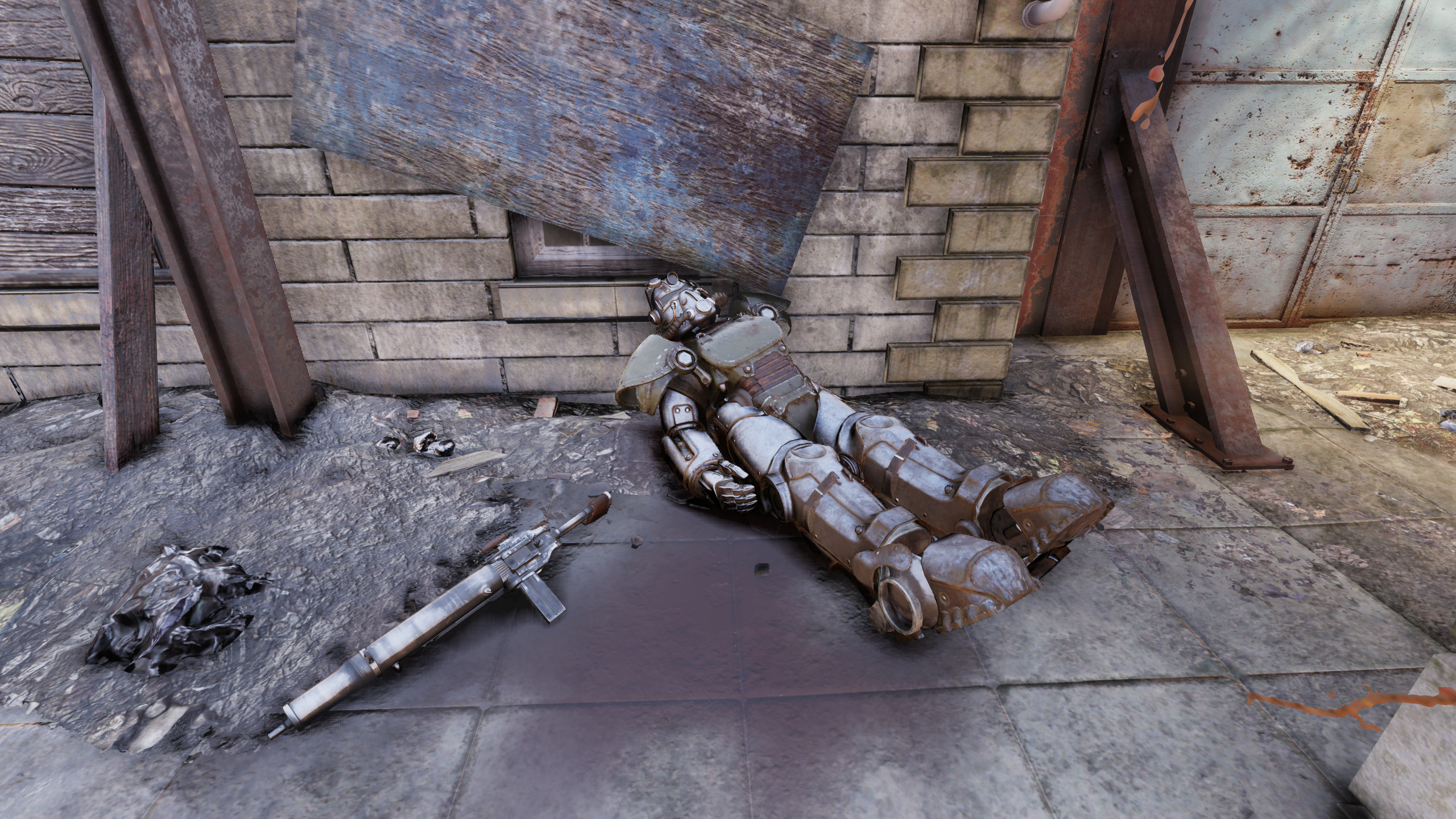 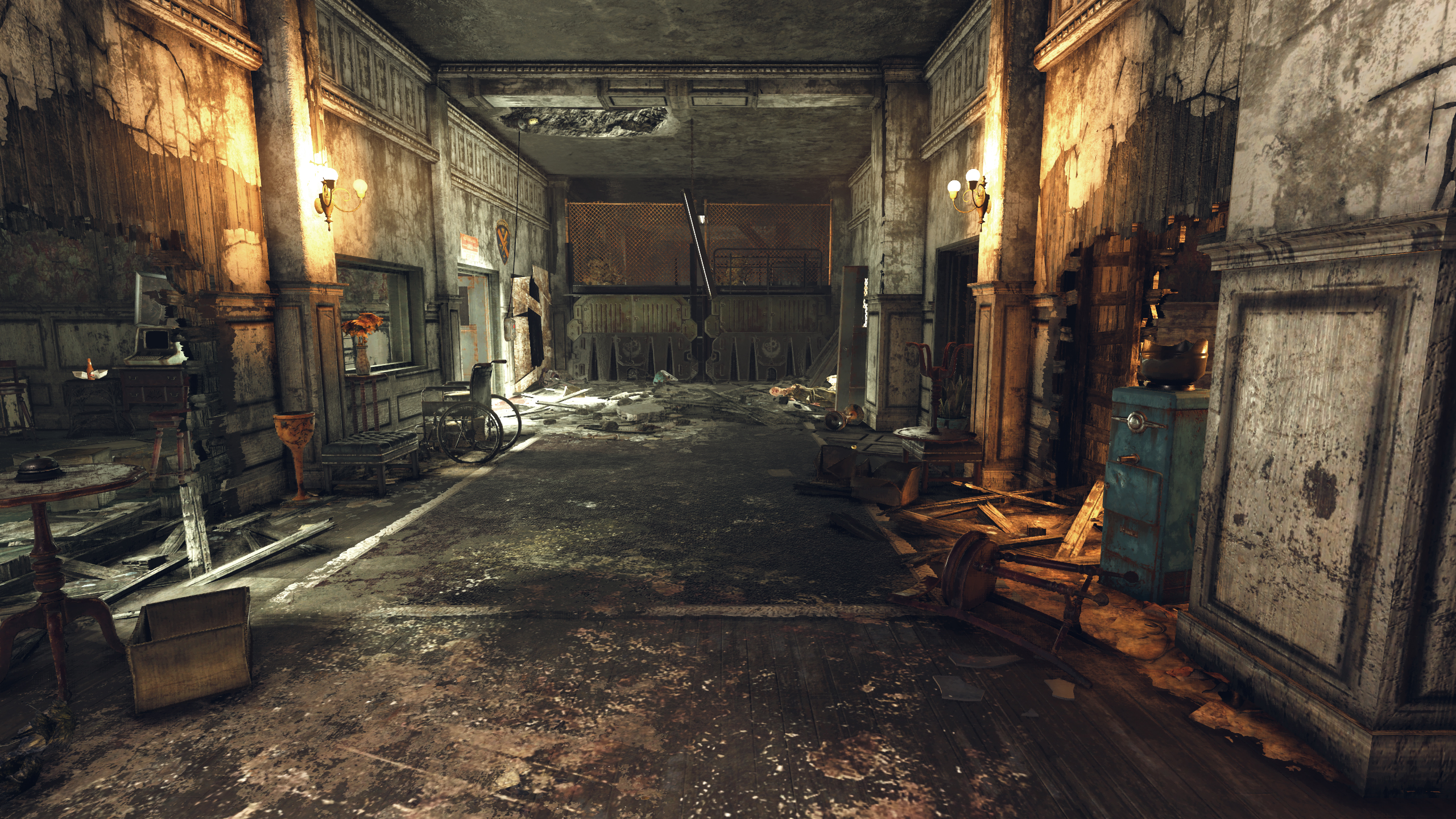 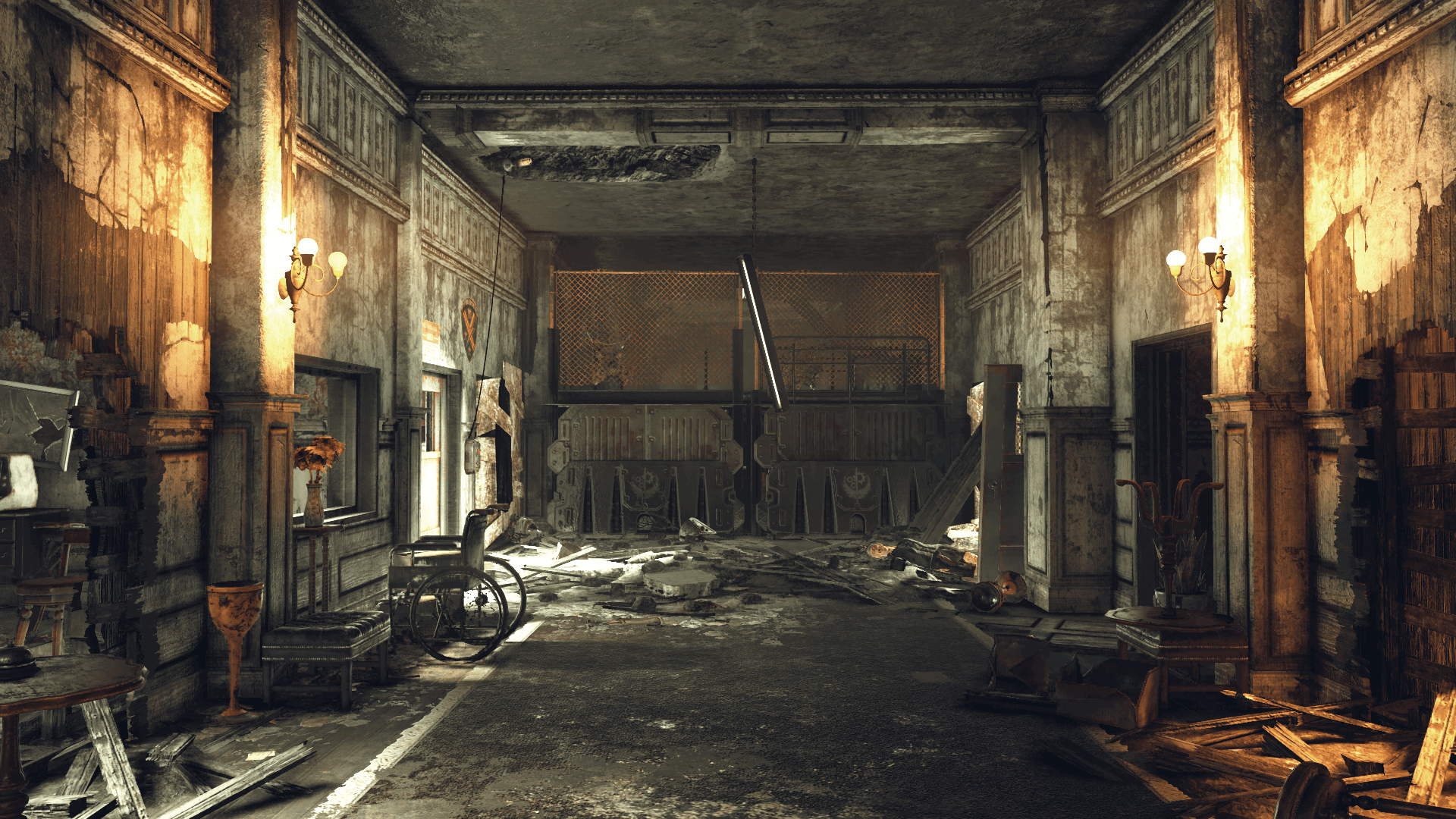 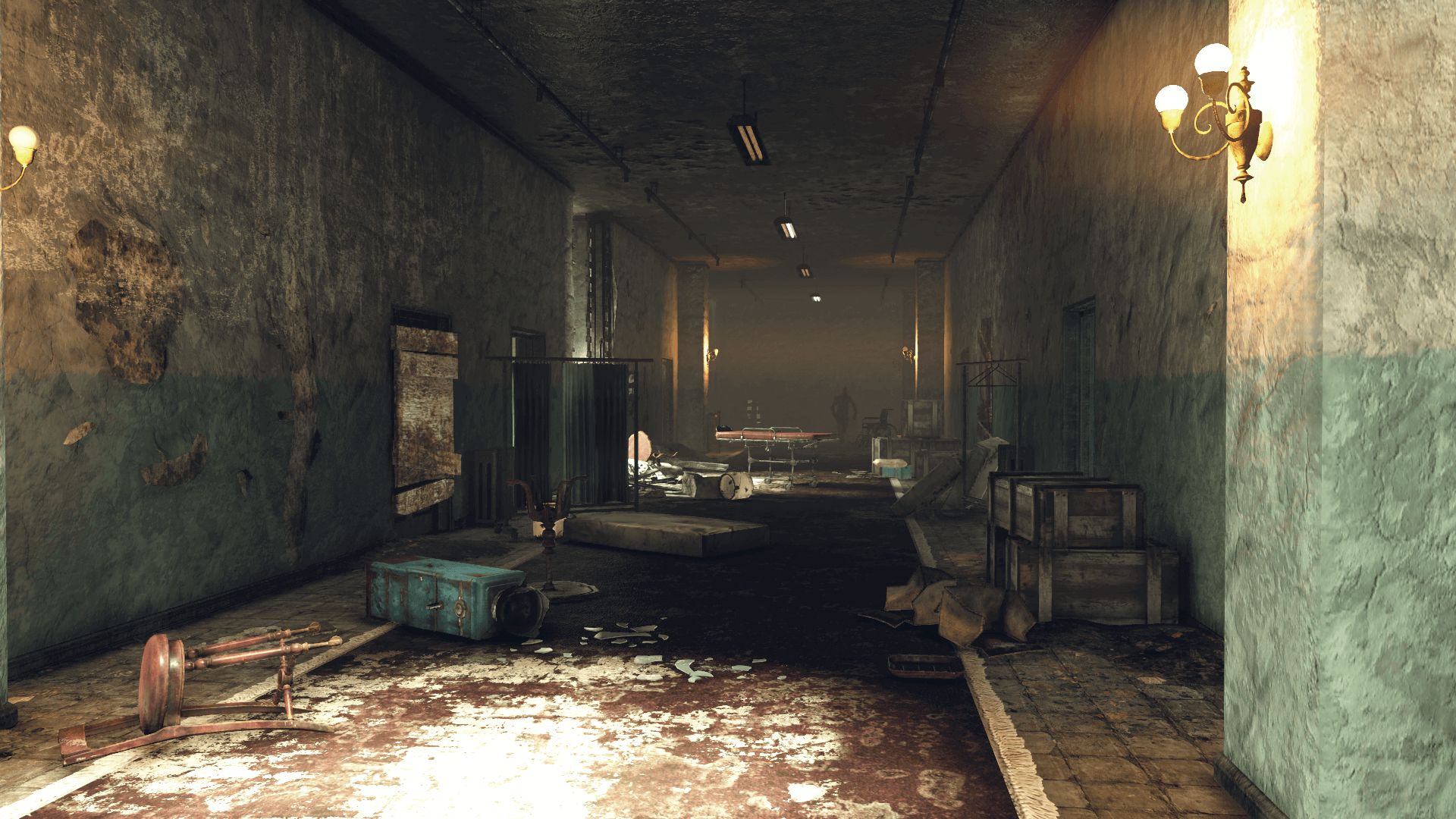 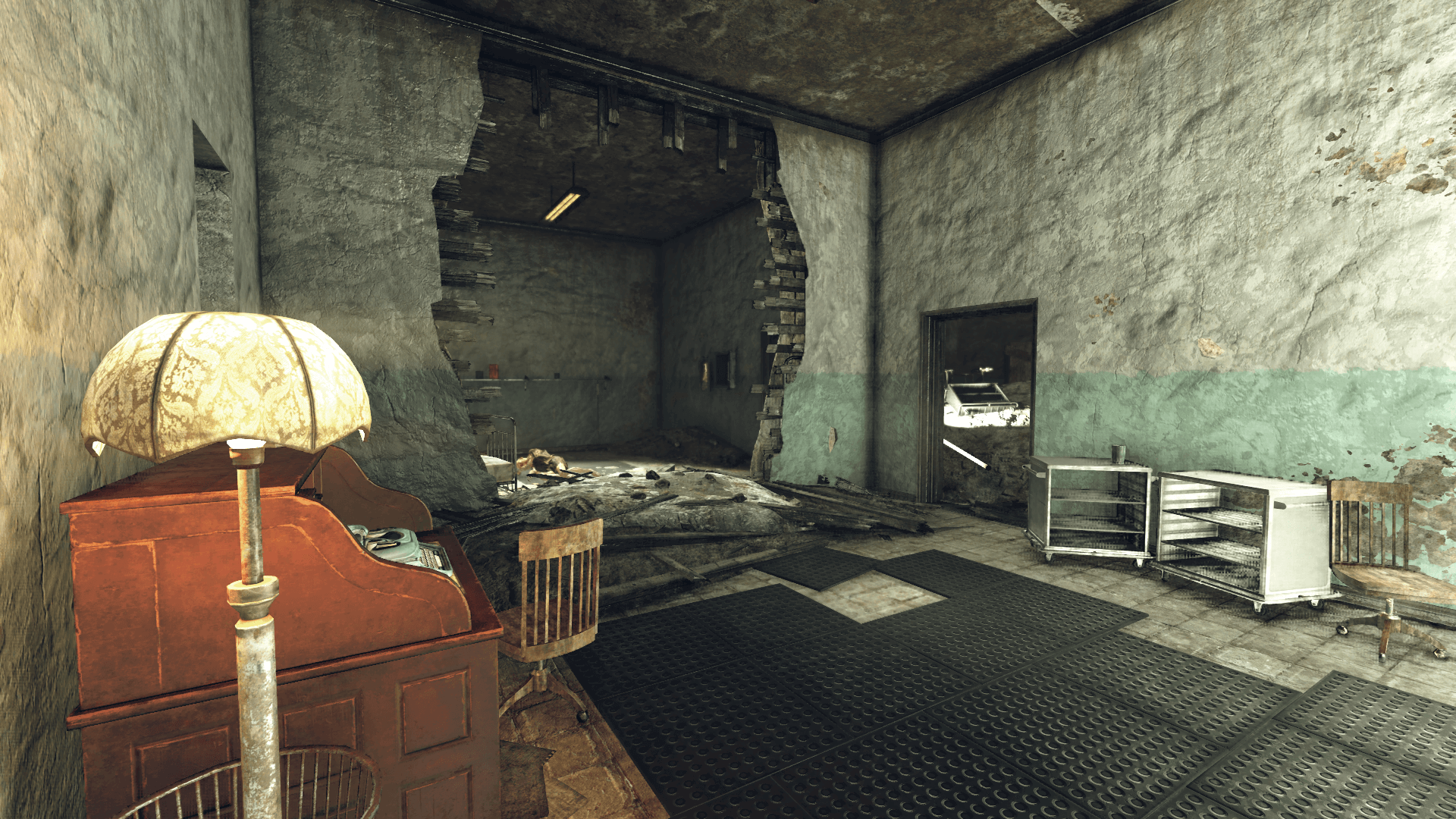 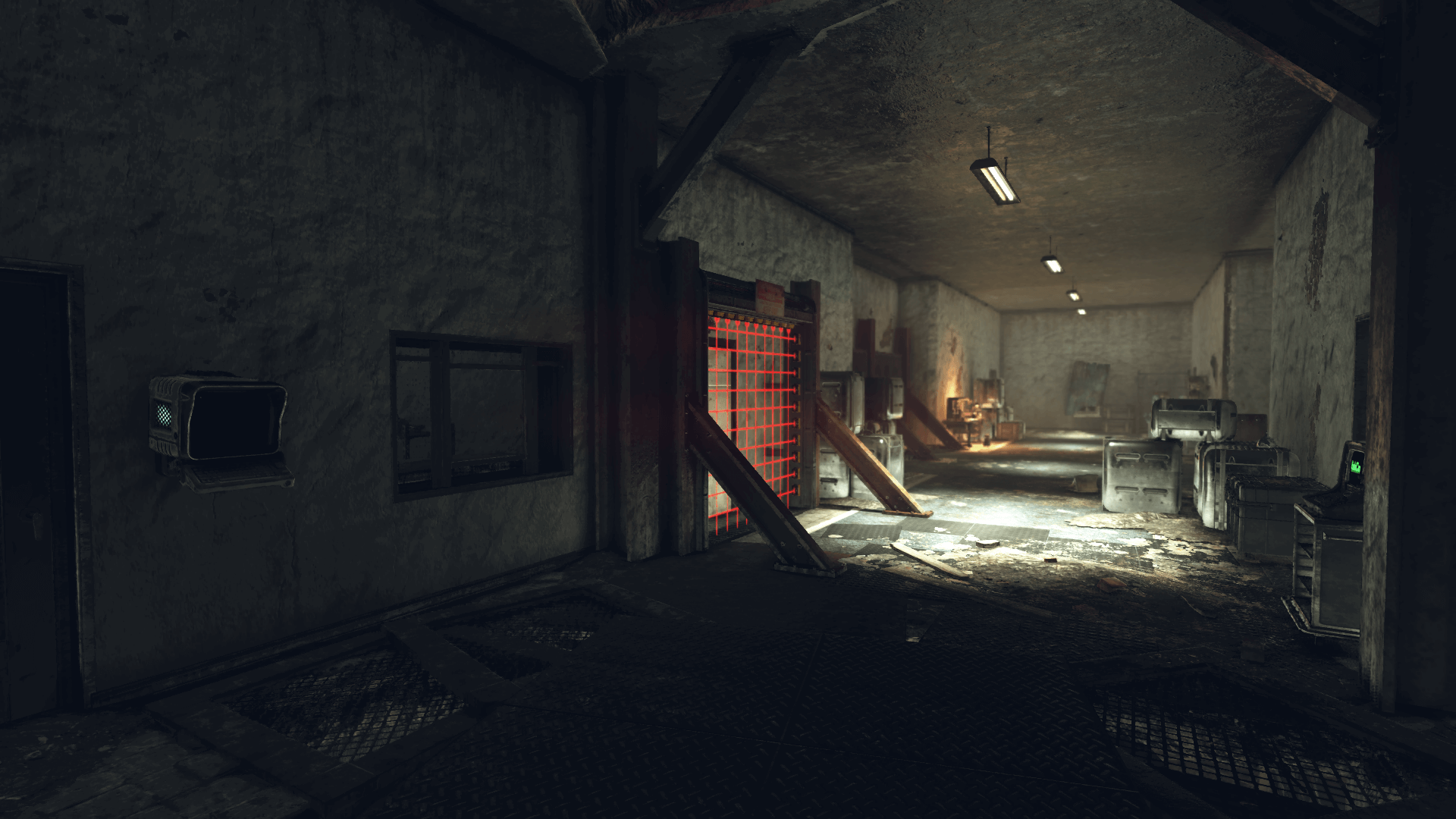 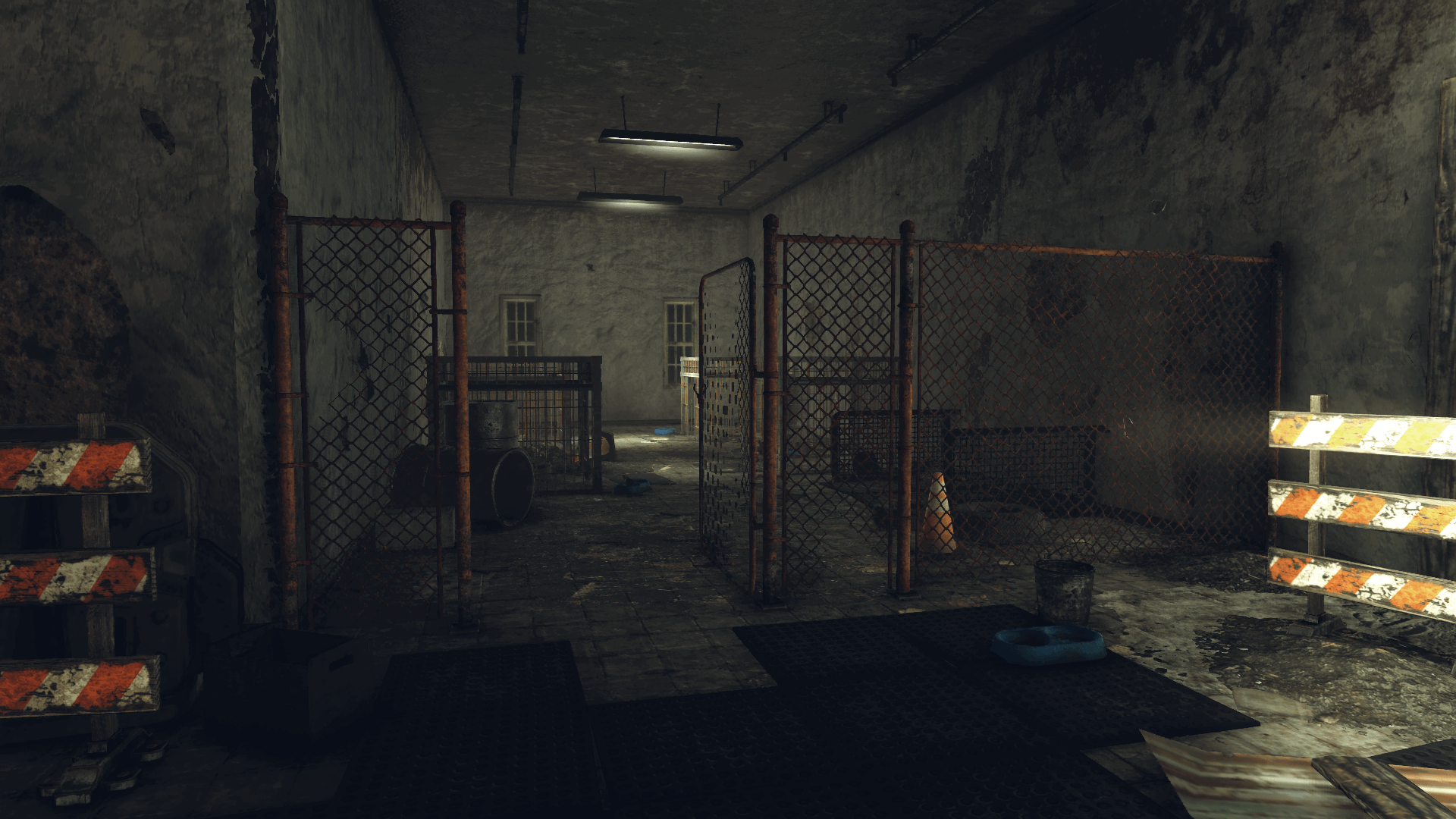 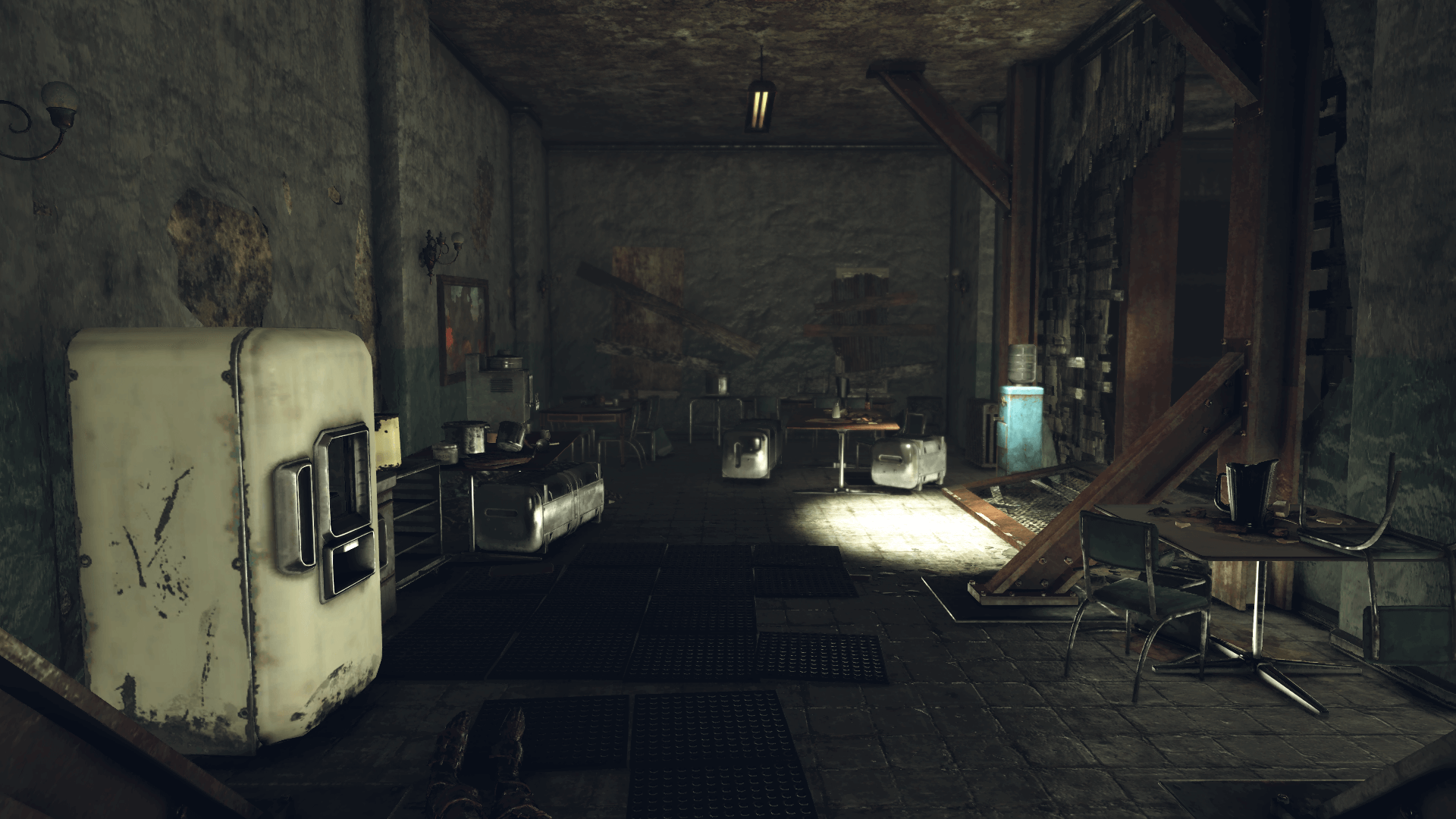 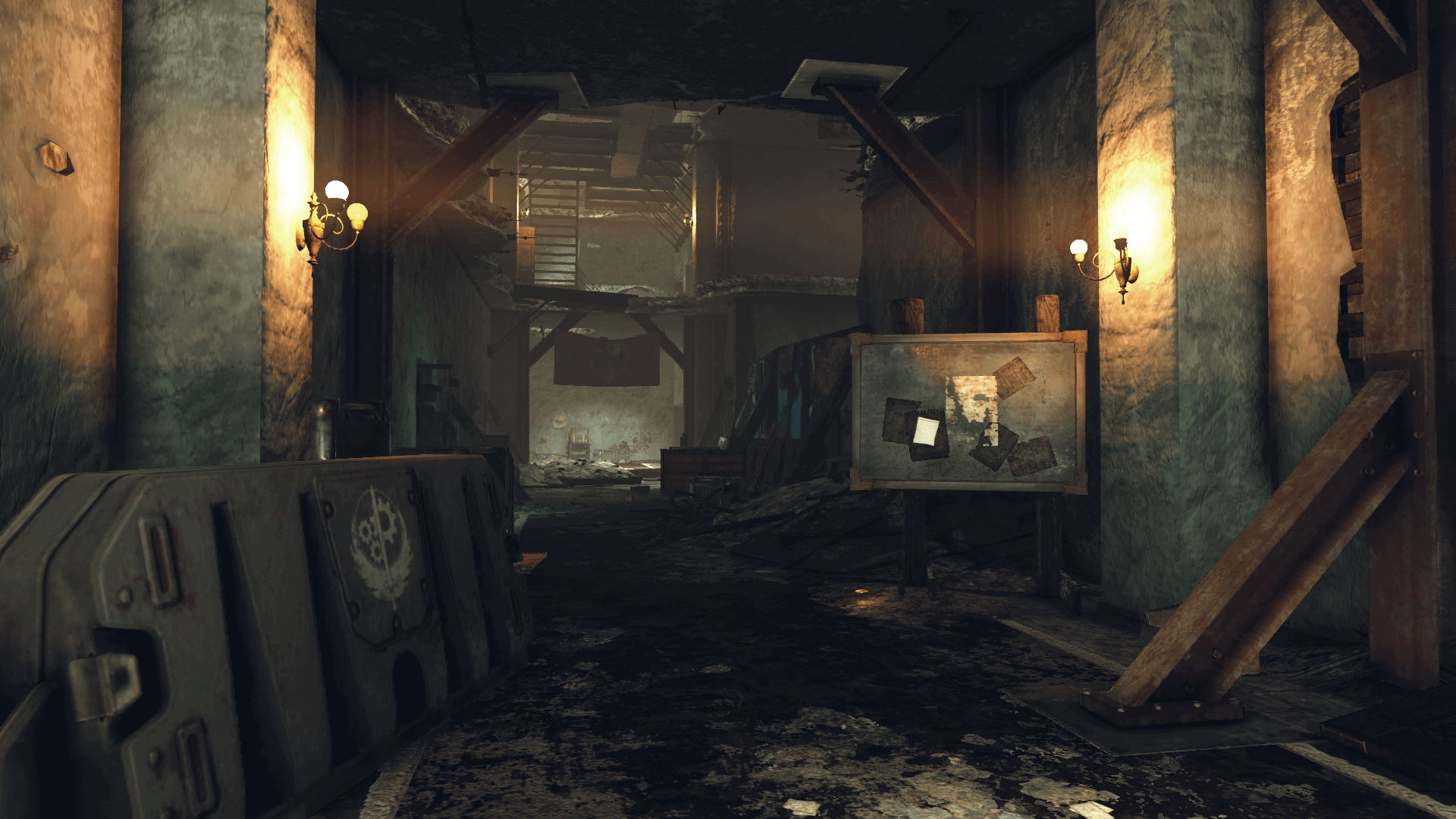 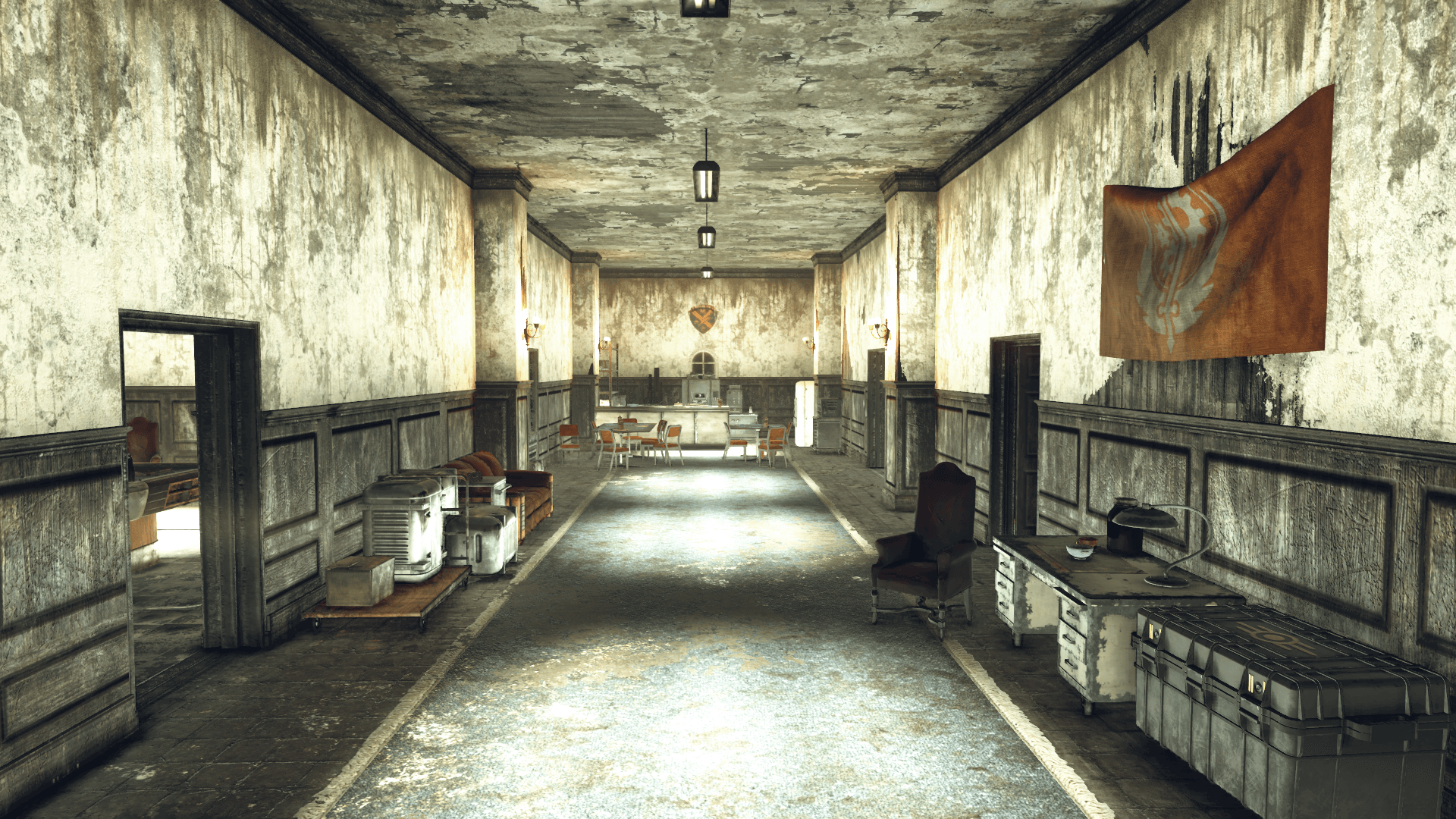 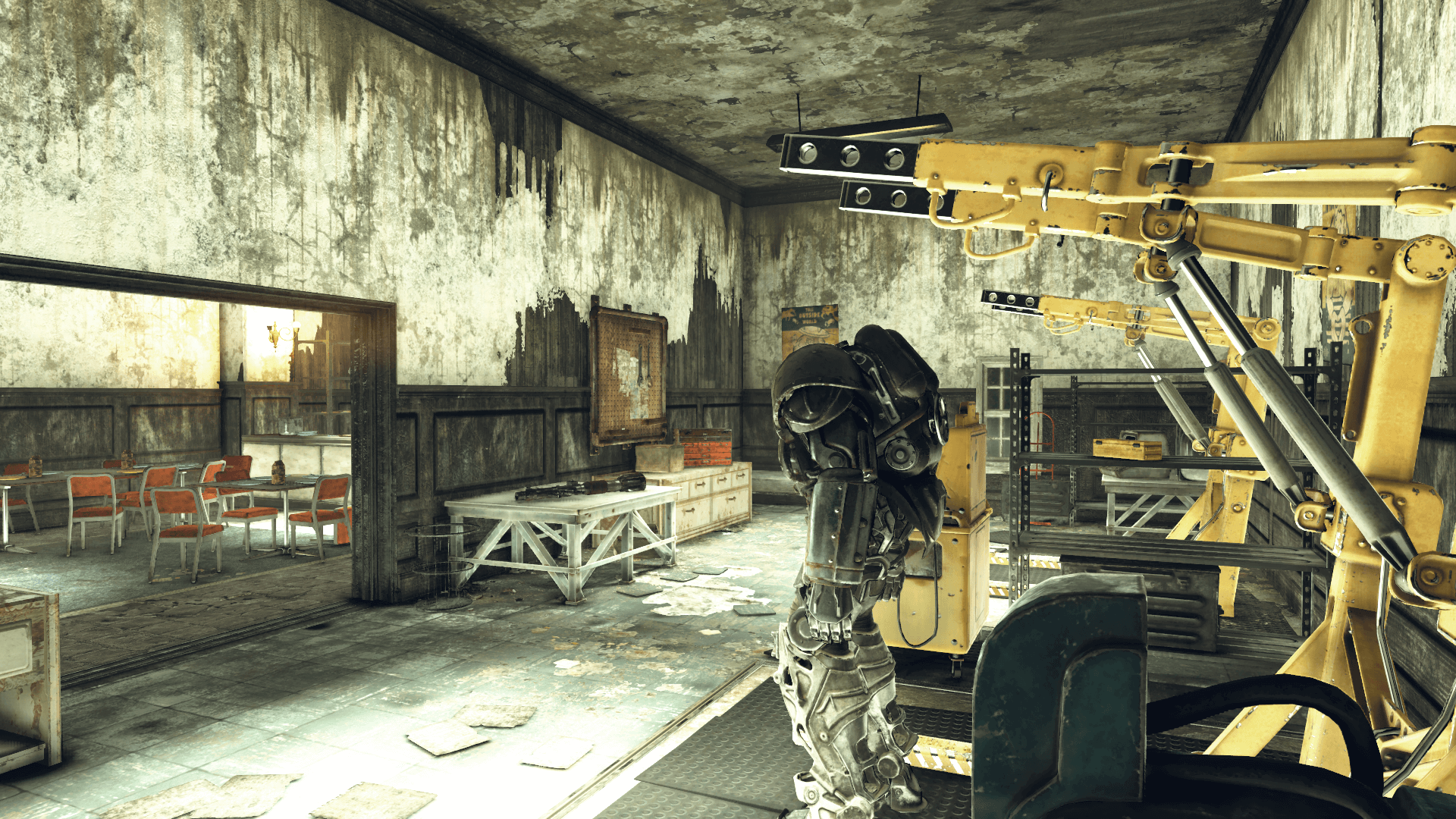 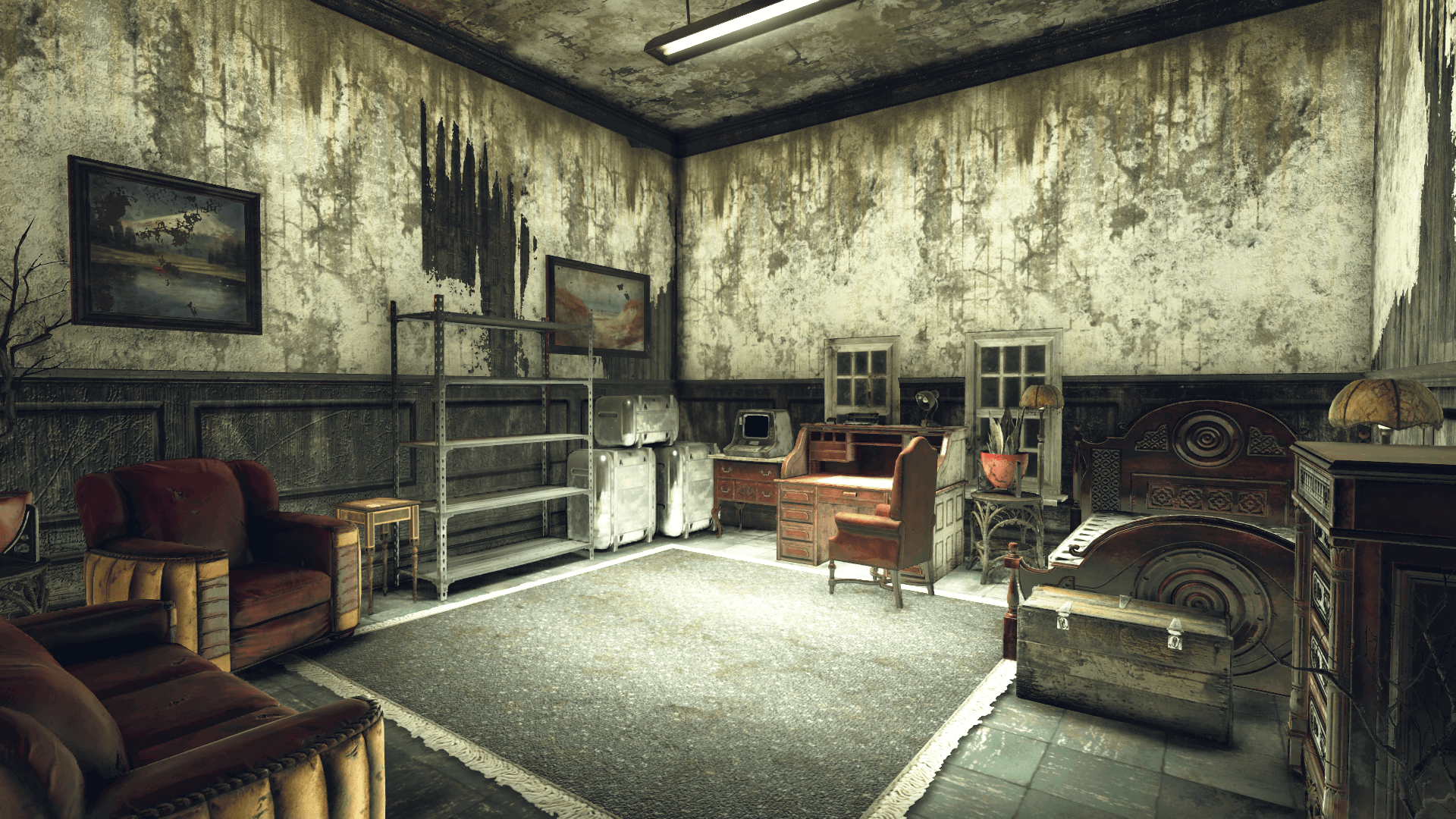 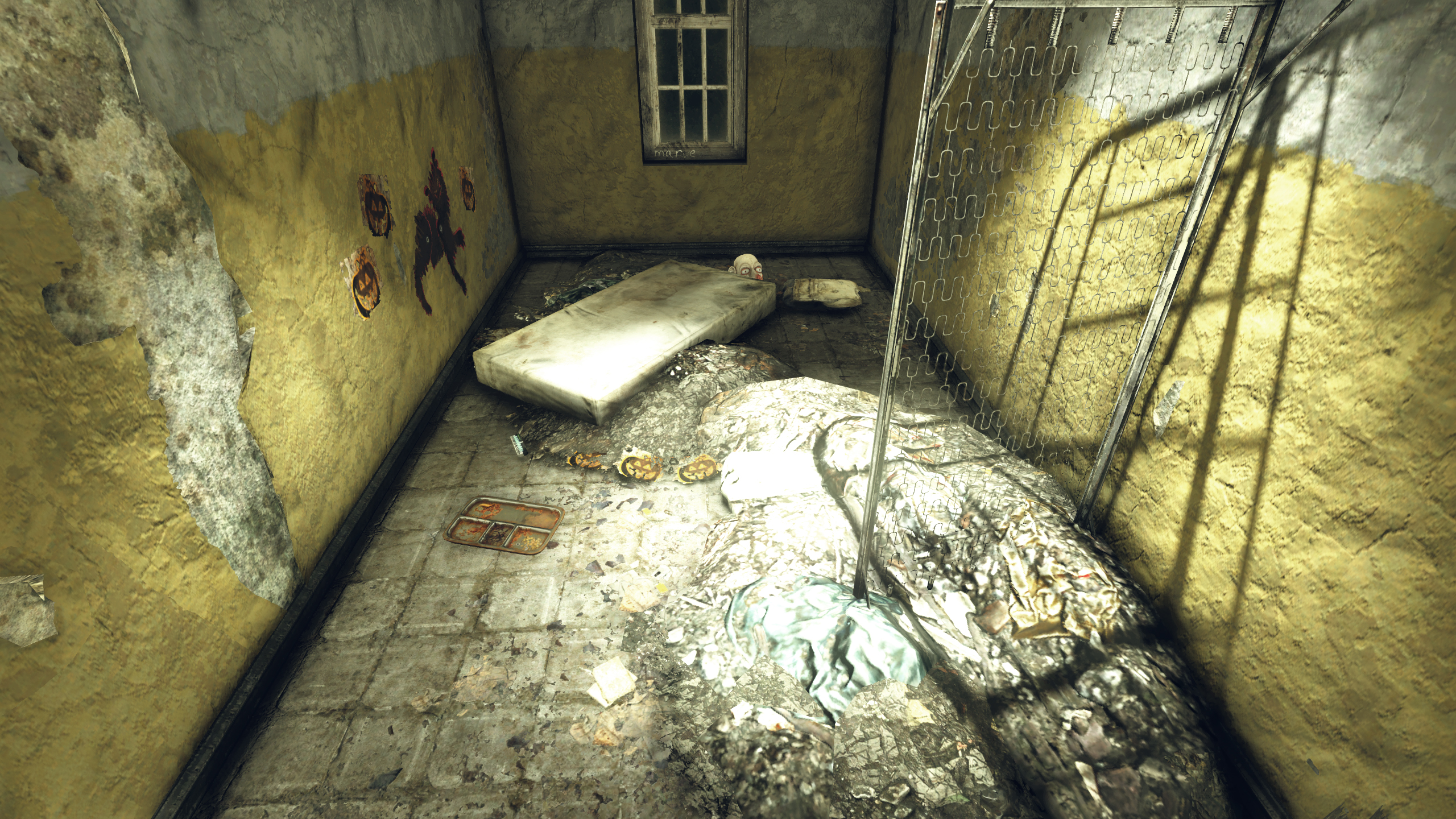 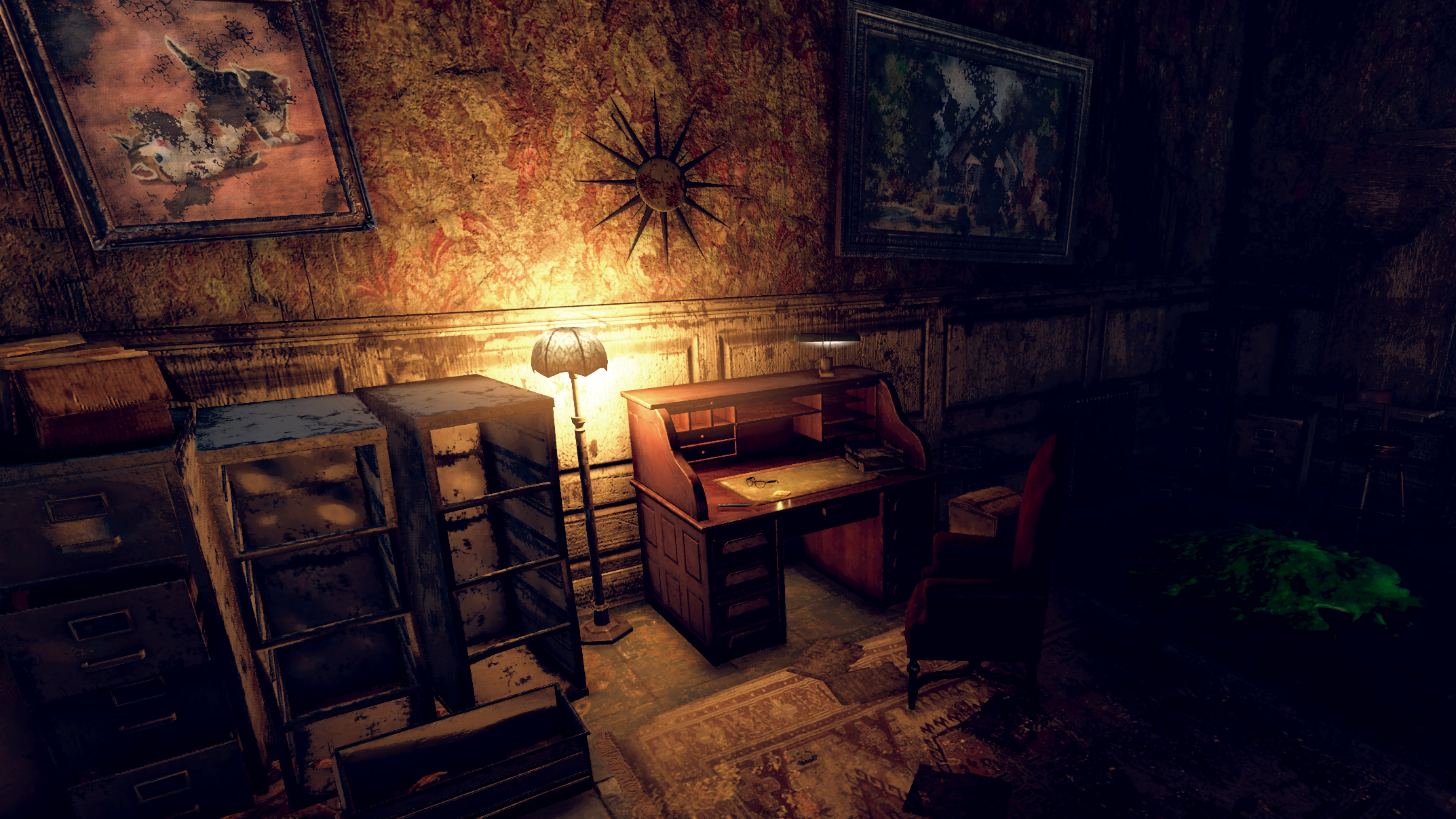 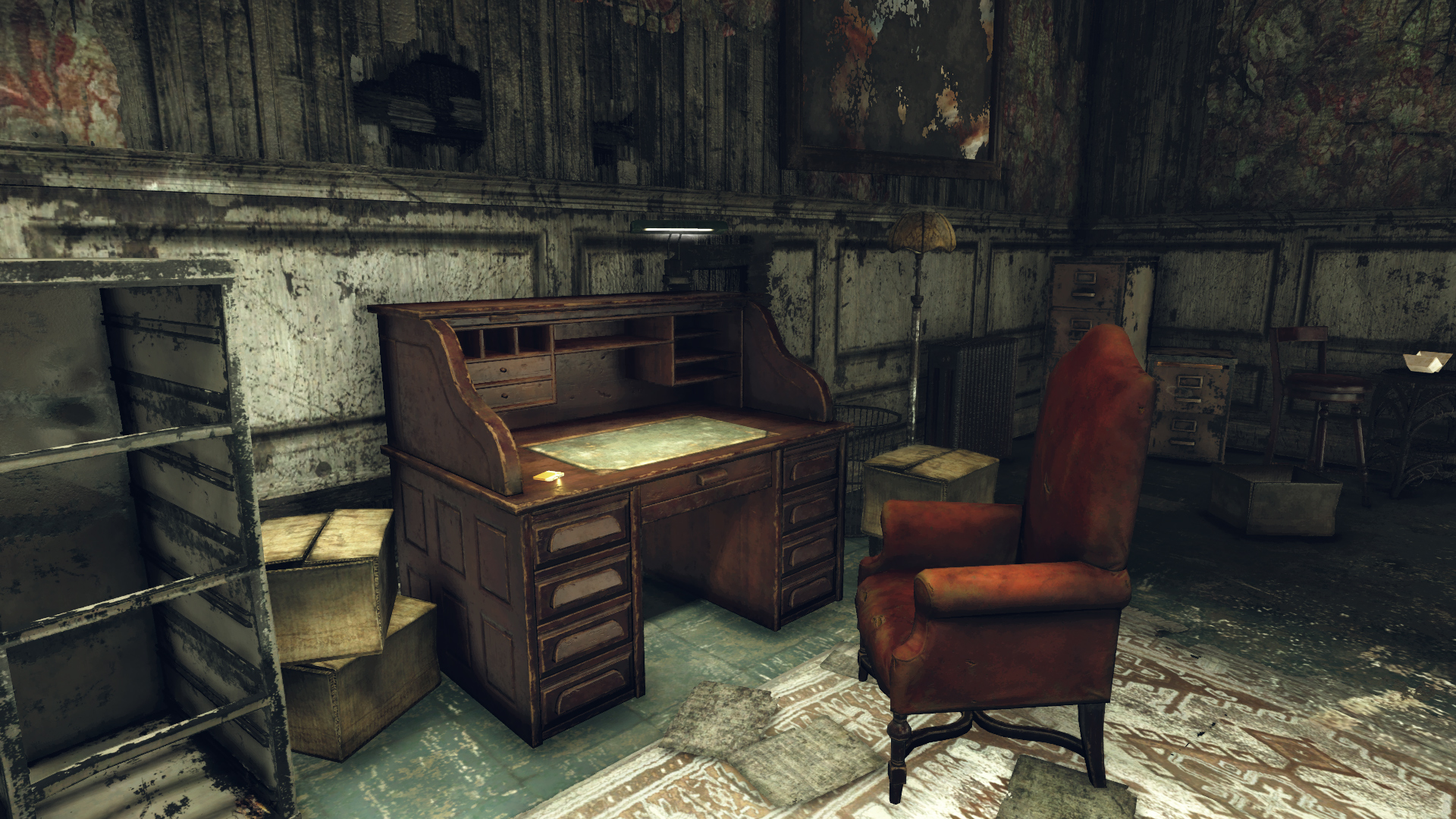 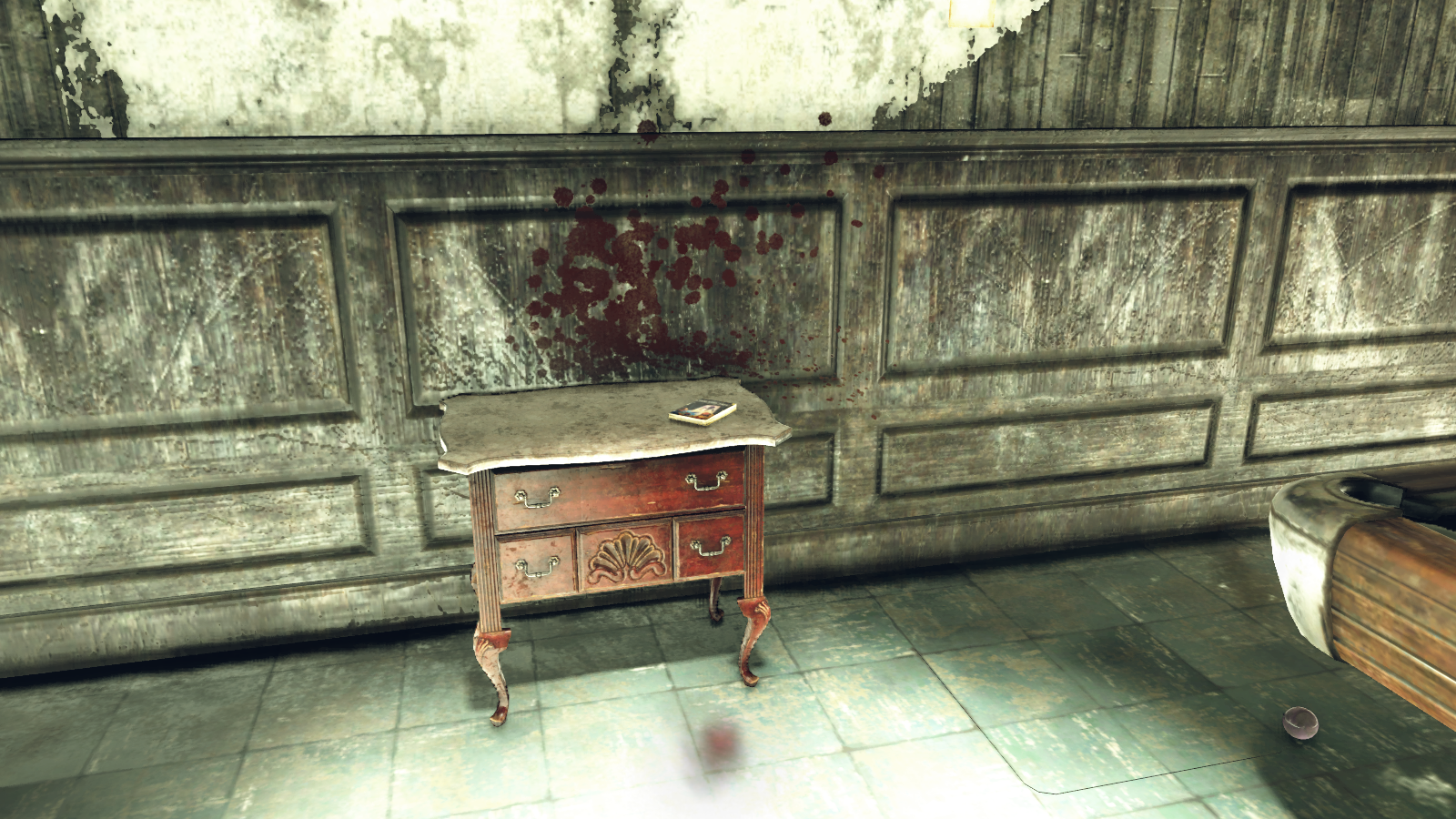 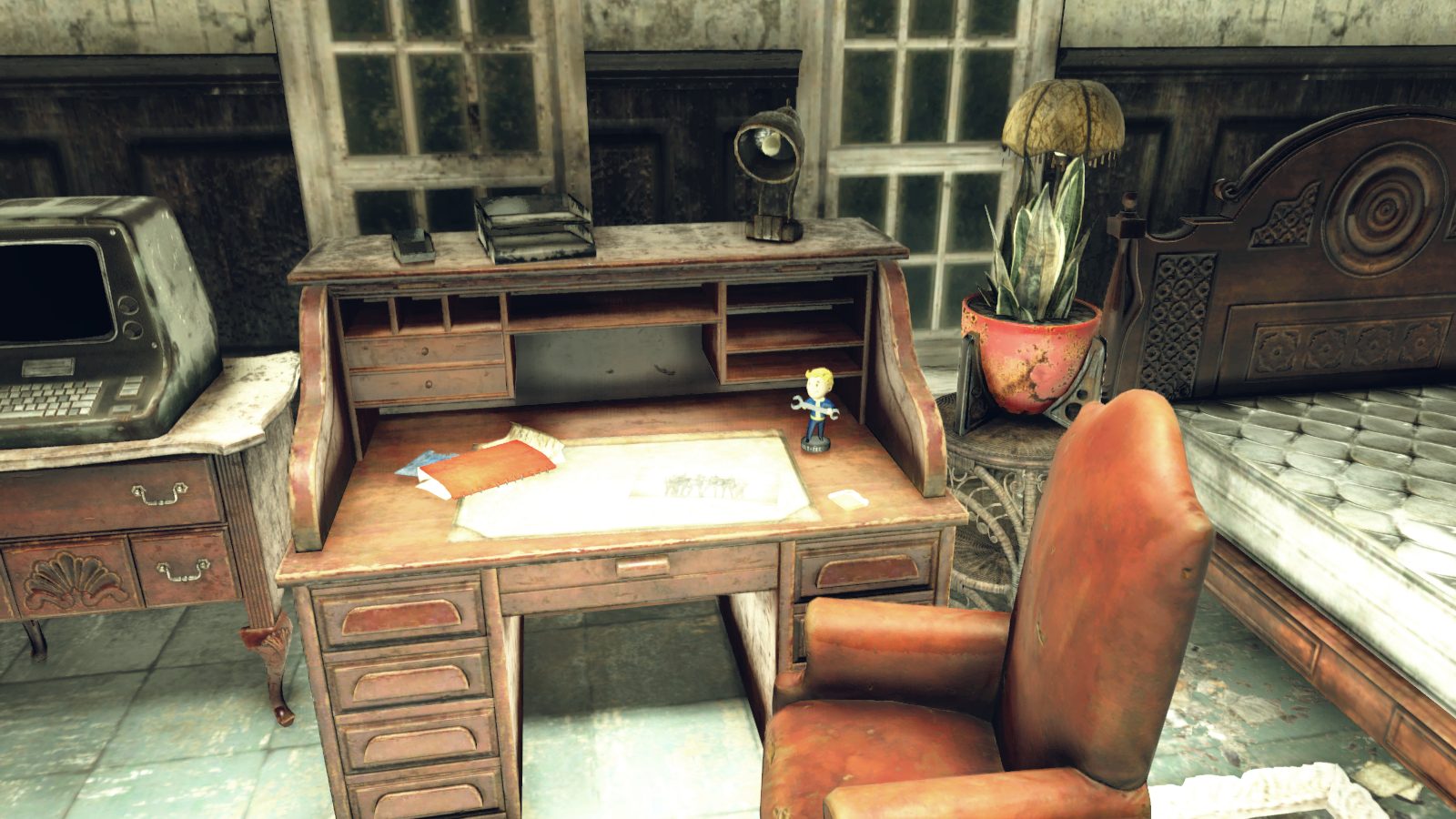