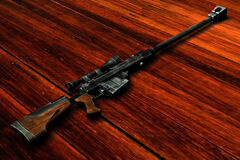 The Hécate II[1] anti-materiel rifle (AMR) is a weapon in Fallout: New Vegas.

Utilizing an ergonomic, metallic skeleton design with a free-floating barrel, the .50 Hécate II is a bolt-action, high caliber precision weapon intended for use against materiel and hard targets. For balance, the rifle includes a tapered barrel and a large muzzle brake to reduce recoil to manageable levels. Unlike most rifles, the AMR was designed from the ground up to be used at long and extreme ranges: It lacks any kind of sights, featuring instead a mounting rail for high powered scopes and a forward bipod mount.[2]

The AMR delivers a high power shot at long distances with great accuracy, although chambered in a larger caliber for hardened targets. As such, the AMR has extremely high damage and low spread and comes pre-equipped with a scope. The magnification level of the scope is 3.13x. Offsetting this is its slow rate of fire, resulting in a low damage-per-second and that the weapon itself weighs 20 pounds, making it one of the heaviest shoulder fired weapons in the game.

Additionally, its .50 MG ammunition is very rare, very expensive, and is heavy if carried in bulk in hardcore mode; a full magazine weighs two pounds without the Pack Rat perk and one pound with the perk.

When fired from the hip (without aiming), the resulting recoil from the weapon's large-caliber will result in the user being pushed slightly backward (evident in third-person view). Aiming down the scope will prevent this.

The anti-materiel rifle can fire a total of about 470 shots, the equivalent of 59 reloads, from full condition before breaking. Template:Durability table 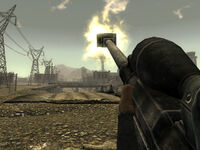 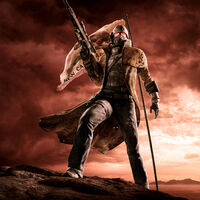 The AMR in key art