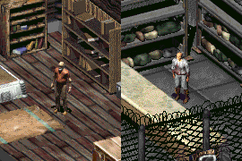 “Now hold on, you neanderthal...”— Renesco while threatened by Salvatore's enforcer

Go visit Renesco the Rocketman and collect Mr. Salvatore's tribute of $1000 is a side quest in Fallout 2.

This is the second quest given by Louis Salvatore. He wants the Chosen One to extort the bi-weekly payment of 1000 dollars from Renesco the Rocketman. Renesco is the proprietor of the pharmacy located on Commercial Row.

It is possible to anger Renesco into such an extent that the only option being to kill him, though the Salvatores will not be pleased with it.

The best way to do the quest is to get Renesco to tell the Chosen One their name (if not already done so), then keep mentioning being sent by Mr. Salvatore. When he finally tells the Chosen to think of something quick, the offer of paying his tribute to Mr. Salvatore in exchange for a "discount" on his goods, will be available (Intelligence of 7 is required). This causes the prices be lowered drastically for all of Renesco's goods for that transaction only (or later in the same dialog if using that option again). The prices can even drop to zero (specific condition unknown), so his entire inventory - likely worth more than a grand - can be be purchased for a single coin.

Return to Mr. Salvatore and give him the correct payment of 1000 dollars. Assuming the Chosen One has been courteous (see Salvatore's page), this opens up Salvatore's final quest; to help guard an Enclave transaction.