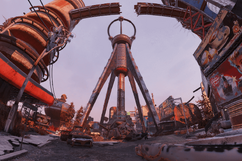 AMS corporate headquarters is a location within Watoga in 2102. It is a high-rise tower housing the headquarters of the pre-War company Automated Mining Services.

The seat of power of the mighty Atomic Mining Services corporation in the heart of Watoga, the headquarters building is a spire towering over all the other buildings in the city. Concealed within its thick, protective walls are laboratories where the corporation worked to unlock the full potential behind Ultracite, its patented ore, and plotted to corner the energy market in the United States by leveraging it.[1] Atomic Mining Services used to conduct ultracite testing in the labs in this headquarters building. Their experiments included exposing mole rats[2] and cows[3] to heated ultracite and observing the mutations that occurred as a result of the radiation. However, they had trouble disposing of the ultracite once it had been depleted.[4] The records of their problems with disposal were vital in aiding the development of anti-Scorched weaponry when Hank Madigan investigated the building after the War.[5]

Directly in front of the elevator exit to the main lobby is a large protectron model with a sign saying "Caution: This machine has no brain use your own." The elevator exit also faces a reception desk - a terminal sits on the desk and there is a locked floor safe (Picklock 2) behind it. Around the perimeter of the lobby are pneumatic tubes marked with the floors they are connected to. Green and red lights indicate whether the tubes are working or are out-of-order. Only the tubes to the third and top floor are working and the tube to the top floor is inaccessible.

The fifth floor has a large open area that looks down at the floors below. There is only one way to go which is along a walkway around the perimeter of the floor. The walkway first passes an employee break room with two Nuka-Cola machines, five cigarette machines and a Port-A-Diner.

CEO Kilson's office occupies the western edge of the eighth floor. Inside his office is his personal terminal, and an eyebot, protectron, and Mr. Handy model on his shelf. He has a private bathroom adjoining his office which contains a dirty tan suit, toilet paper, soap, and a locked floor safe (Picklock 2).