Following in His Footsteps
The Power of the Atom

“I ain't killed a drifter in weeks. This should be fun!”

Lucas Simms is the sheriff and mayor of Megaton in 2277.

Simms was born in 2236. He grew up in Megaton and understands what it takes to survive and thrive in the wasteland. Big and imposing yet warm and friendly, Lucas won his position by a unanimous vote of the people of Megaton (most of whom genuinely love the guy). He serves as mayor, sheriff, judge, and just about any other position that's needed. It's also no secret around Megaton that he is fulfilling a childhood cowboy fantasy after his father read him stories as a child. He named his son Harden after the Old West outlaw John Wesley Harden. Simms is also a member of a secret society known only as "the Regulators."[1]

He often contests the title of "mayor" with Colin Moriarty. While Moriarty claims Megaton to be "his city," Megaton's other citizens agree that Simms is the real mayor. Simms, who despises Moriarty, warns the player of talking to Moriarty and tells the same to his son.

In 2277, Sheriff Simms foiled an ill-conceived raid on Megaton by a band of raiders headquartered at Springvale Elementary School. During the conflict, Simms shot and killed the raiders' leader, Boppo. 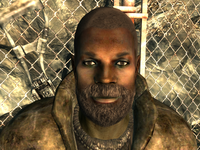 Lucas without his hat 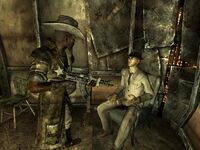 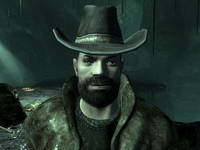