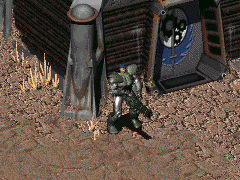 “Uh, well, I talked to the High Elder, and he said that not just anyone can join. He, um, he said you have to complete a quest first.”