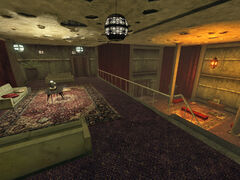 Cachino's room in the Gomorrah suites

“He's a skittish little fucker. Spends half the day pumping his body full of chems and the other half pumping hookers with his willy.”

Cachino is a member of the Omertas family living in the Gomorrah casino and hotel in 2281.

Cachino is a discourteous lieutenant of the Omertas, holding a degree of responsibility in the family's operations. He boasts a checkered past, having conducted some deals on the side behind the backs of the bosses in the Gomorrah casino. Upon closer investigation, these endeavors are actually the lieutenant's own personal finances. He has even repeatedly brutalized and raped some of the working girls in the casino.

The Omerta member is in a questionable relationship with Joana, ignorant of the fact the hooker's love interest is actually a former employee of the Omertas. He tries to keep these facts secret from prying eyes since the punishment for doing anything against the interests of the family is death. Cachino feels some regret for his shady dealings and actions. His journal documents how he constantly vows to himself that each time he does another off-the-books sale or engages in another sexual tryst, this time will be the last time.

When Nero secretly brought the Omertas into an alliance with Caesar, Big Sal assigned Cachino to supervise the preparations for the Omerta's plan to invade the Strip when Caesar's Legion gave the word, oblivious to his exploits and deals on the side.

After the deaths of Big Sal and Nero, Cachino will appear on a Radio New Vegas news bulletin and comment that Nero always wanted to "Sleep with the lakelurks." This is a reference to the film The Godfather where, following his murder, Luca Brasi is said to "sleep with the fishes."

Towards the end of the quest How Little We Know, Cachino will offer a gun to kill Big Sal and Nero. When asking Cachino for the gun just before the fight, his head may start to spin around in a very creepy way. This can be resolved by ending the chat with him and then talking to him again. [已核实]