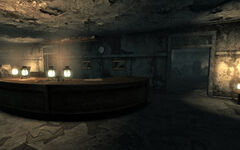 “I send my men with the water to the Museum Authority in the Mall. Griffon sends the payment back with my men. So far, so good.”— Scribe Bigsley, The Amazing Aqua Cura!

博物館機關大樓是DLC3斷鋼新增的地點. 地點是在國家廣場，在朗方廣場的北方和在國家廣場西南區地鐵站的東邊。The associates of Griffon are using this place as their headquarters.

The Museum Authority looks like a fairly standard office building. The entrance is located on the eastern side of the building. Some radroaches and skeletons are found in front of it.

The interior features multiple floors有2-3名的敵對屍鬼守衛看守著. One of the ghoul guards is carrying the audiotape Griffon's bottling instructions, which can be looted after he is killed. The top floor is divided into two large rooms, one with office cubicles and another with a large counter. There are also two bathrooms. A staircase at the northwestern corner of the building connects to the lower floors. The intermediate level is partially collapsed and contains a few office desks as well as filing cabinets. On the lowest level, Griffon's bottling operation can be found, consisting of a few bath tubs, sinks, and a closet containing a lot of wigs. Another copy of "Griffon's bottling instructions" is laying on a table in between bathtubs.

The Museum Authority Building appears only in the Fallout 3 add-on Broken Steel.

在這大樓終端機7中有張便條MA-0085提及來自國家水族館的吉莉安·泰勒博士的要求，Her request for a new tank for her whale exhibit has been denied. However, the San Francisco aquarium has agreed to build the tank and the administrator mentions working 讓她被轉送到舊金山水族館 。這是參照星艦迷航記IV：搶救未來的同名角色，who is in the caretaker of the humpback whales, "George and Gracie". These are the same whales rescued by Captain Kirk and friends, brought to the 23rd century, and that save the earth from an alien probe via whale song.

Overview of the basement