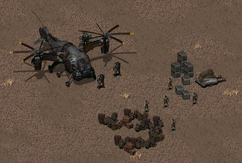 “Awright, the boss says you're coming along on a little TRANSACTION we're doing.”— Mason

Help guard a secret transaction taking place in the desert is a side quest in Fallout 2.

This is the third quest given to you by Louis Salvatore. Mr. Salvatore wants you to help him guard a transaction he wishes to do with the Enclave.

You need to have earned enough "respect" to get this quest and to be offered Made Man after it. See Salvatore's page for details.

Before going on the mission, if you've already earned 9 "respect points" with Salvatore and have learned about the lightbringers from Jules or Father Tully, you can request a laser pistol from him. Mason will give it to you, and if you ask he'll teach you to use it, improving your Energy Weapons skill by 5%. Asking for the pistol without enough respect will damage it further (you may be planning for this if you aren't going to become a Made Man).

When you talk to Mason for the details, you can either choose to go now, or wait. In the latter case, you are given one game day to come back or you'll miss the opportunity (and Mason will not take kindly to it). When you accept to go with them you'll be sent to an outside location where five of Salvatore's guards and two Enclave soldiers are making the deal. During the transaction it is obvious that the Salvatores are scared of the Enclave. Move around and you're liable to be attacked, so just wait patiently until the other guards leave, and follow them. Do not approach the Enclave soldiers or try to talk to them.

If you don't screw up, the transaction will go off without a hitch, and you'll be able to return and talk to Mr. Salvatore. You get 1000 XP for completing the mission.

If he asks you to become a Made Man of the Salvatores, and you accept, you get an additional 1000 XP. When you talk to Mason after that, he hands you an "armload of items":

Being a made man gives you respect from others, but also makes you unable to go into the other family hideouts (without a fight to the death, that is). However, rejecting Salvatore's offer causes his guards to attack you. So either conclude your business with the other families, or be prepared for a fight when you return to assassinate Boss Salvatore for Big Jesus Mordino through the stealthy options before tackling his men.