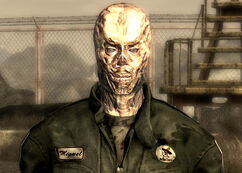 Raul Alfonso Tejada is a Mexican ghoul mechanic and gunslinger living in the prison building at the top of Black Mountain in 2281.

生於2047年，勞爾是一個有很長故事的屍鬼。戰前，勞爾曾經是墨西哥Hidalgo Ranch的一名罪犯。他曾是一名優秀的射手和技工，這兩項技術有時依然給他帶來法律上的麻煩。During the war, the ranch he lived on was spared from atomic destruction due to being located in a remote area. Raul also witnessed Mr. House's missile defense system protecting most of Las Vegas from an impressive amount of distance. Soon, the ranch was beset by refugees seeking food and shelter. 特哈達家族被流竄難民擠走生存空間，Raul's father was forced to turn down any more unfortunates seeking help, due to their resources becoming scarce.

在那個當下，勞爾和他老爸必須從剩下的難民手中逃脫，而且他們的房子當天晚上就被2打暴民燒掉了，barring the doors from the outside to prevent any escape 。Raul awoke to the smell of smoke 並成功救出了一個姐妹，Rafaela, receiving burns across his body in the process. 其餘的家庭成員，包括他的父母、祖母、2個兄弟和2個姐妹都死於大火。As they escaped, a few of the men pursued them. Raul killed the pursuers, and left the rest to live, since he did not want to throw away his life in revenge; he still had a sister to take care of.

他們逃到了墨西哥城的廢墟開始了一段新生活，amidst the large number of looters in the city. They both scraped by as scavengers, constantly looking for food, and medicine to treat Raul's burns. The intense radiation of their surroundings soon started affecting Raul, commencing the first stages of his ghoulification. 一天，在四處搜尋中，他從時裝店裡找到了一件保存良好的牛仔外套。當勞爾穿著牛仔外套回去找Rafaela時，這是自核彈落下以來她第一次笑出聲來。剎那間，勞爾成為一個傳奇，his sharp eye and top-notch gunslinging always meant the end for glory seekers who were looking to prove themselves. Even though this kept Raul and his sister safe from trouble, it always created more。

勞爾因為屍鬼化的癥狀而沒能同他姐妹一起外出。As such, she was left to provide for the two on her own. 有一天當他的姐妹外出搜索沒回來時，Raul noticed raiders nearby, fearing the worst他衝出去找到的只有她被一群強盜殘忍地殺害的事實，她的屍體被毀壞嚴重到只能通過她膝蓋上的一塊疤來辨認。Fuelled by anger，隨後他就追蹤到了強盜營地並殺光了他們所有人為她復仇。He salvaged what was left of the raider gang's possessions and left Mexico City, now the lone survivor of his family.

Leaving every aspect of his former life behind, including, as Raul says, his "face," he wandered to the Gulf Coast and inhabited an unclaimed Petró-Chico refinery. There, he spent a long time thinking about his life. 他認為她姐妹的死是他的原因，他discarded his guns and脫去了牛仔外套，換上了一件Petro-Chico連衣褲以及一個新名字"Miguel"; the name found on the jumpsuit's nametag.

Bearing a new identity, he eventually arrived in the Arizona town of Tucson, now known as Two Sun. He settled there, becoming a mechanic and a general handyman, his guns stashed away where they could do no further harm, although he still kept them oiled out of professional pride. After seventy-five years of relative peace, he met Claudia; a prostitute working in a local brothel who bore a striking resemblance to Rafaela. Spurred by this reminder of what he lost, he took the time to look out for her, though for obvious reasons never visited her.

This peace was not to last. Arizona was overrun with raiders and tribals before the rise of Caesar's Legion brought stability to that region; the conditions brought "Dirty Dave" and his six brothers to town looking for ammunition. Raul sold it to them, hoping they would leave now that they had what they wanted. Instead, they decided to take their edge off in the brothel. They massacred the place and took Claudia as a prisoner when they left. Enraged, Raul pursued the gang. They had a head-start, and slept nights; Raul didn't. After three days of continuous pursuit, he finally caught up with them. By the time he found Claudia, she was already dead. This ignited a familiar feeling in Raul; the vengefulness he'd felt at Rafaela's death. In a state of fury, Raul charged head-on into the middle of the camp, and kept shooting his guns until Dirty Dave and his gang were all dead. Youth wasn't on his side anymore; the battle left Raul severely injured and nearly lifeless. After days of gathering his energy to carry his injured body, Raul returned back to town.

Dejected, Raul has wandered west to the Mojave Wasteland. He swore to himself that he was done with the gunslinging life, since he is starting to feel his age. While there, he stumbled upon the signal of the Black Mountain Radio, and started listening to it to pass time. One day, he lost the signal being transmitted and decided to have a look. He ended up meeting a nightkin named Tabitha, the radio's broadcaster and supreme ruler of Black Mountain. Raul fulfilled his purpose and fixed the radio's transmitter, but much to his dismay, Tabitha decided to keep him; after all, he couldn't disagree with a super mutant twice his size. Raul was then turned into Black Mountain's handyman, fixing toasters and things the super mutants wanted fixed. He has also been tasked with the repair of Rhonda, Tabitha's robot and best friend, in which he has been unsuccessful. To guarantee his cooperation, Raul is imprisoned in a building near the mountain's broadcast station to which he later claims he was held against his will for years. 在被從監獄解放之後，他會加入信使的隊伍作為感謝。嘗試一段新的冒險提醒著勞爾他不堪回首的過往，鼓動他思考是否應該接受過去的槍手之路。 In this case, he will be forced to decide between two different ways of life.

When compared to the other human companions of the Wasteland, Raul is perhaps the most tolerant towards the Legion when compared to everyone else who would suffer under their rule. He is not affected by the Legion's presence in the wasteland and admires the security and order they bring, although he wouldn't be able to join them due to their hatred towards all forms of mutants. He also has quite an insightful amount of knowledge about Mr. House, as Raul has lived long enough to remember his pre-War exploits.

Raul in his vaquero outfit
在此图库中添加照片