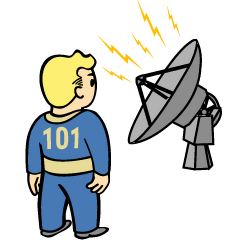 “At the battle for Project Purity, you proved yourself... and any doubt that I had about you dissipated on that day.”— Elder Lyons

Who Dares Wins is the fifteenth and final Fallout 3 main quest and achievement that is added to the game in the Broken Steel add-on. It is also the third quest in the main questline of Broken Steel.

Paladin Tristan has tasked the Lone Wanderer with infiltrating the Enclave's final, massive base at Adams Air Force Base, and destroying it with an orbital strike. The quest begins at White House Plaza. The utility tunnel that leads to the White House now also has a connection to the Presidential metro, which should lead directly to Adams Air Force Base. Reach White House Plaza and enter the tunnels. The metro is crawling with feral ghouls, Mister Gutsies and sentry bots. The player will proceed down several different tunnels before meeting with M.A.R.Go.T., the protector, and dispatcher of the metro. The robots (and M.A.R.Go.T, to some extent) are initially hostile, but if by passing a difficult Speech or Science check, or present a valid Senate employee ID, M.A.R.Go.T will mark the player as friendly, and they will have a chance to use her for information or help.

The player can learn that the train to Adams is offline, due to a "security breach" which has resulted in "the forced removal of a main fuse." M.A.R.Go.T can repair the fuse and train, but only if the breach is contained. According to her, the intruders have depleted 22% of the metro security units, have no internal body heat, and are emitting lethal levels of radiation. The metro units should be able to handle the breach at lower levels, but higher levels can result in facing several Feral ghoul (Fallout 3)#Feral ghoul reavers, which will make short work of the sentry bots. If you aid in containing the breach, the Presidential metro sentinal

unit will repair the Adams tram; if not, one can find the main fuse on its body, as well as in the room with the fuse box, and can use it and a Repair check to fix the train..

After a quick ride on the train, one will wind up in the Adams metro station. Continue through the tunnels, and the player will encounter the first of many Enclave soldiers in Adams. Reach the surface, climb the stairs, and take a left to find the "Resupply Crate" Tristan mentioned. Inside is a Tesla cannon at 100% condition, 50 electron charge packs, 50 microfusion cells, and the Lone Wanderer's orders, contained within a voice recording, courtesy of Tristan. There is also a dead robobrain nearby containing a few energy cells.

Proceed to the right, and begin the long trek to the mobile base crawler. The path is littered with Enclave troops, regular and Hellfire, banks of turrets, deathclaws, and several combat-ready Vertibirds. Make use of the Tesla cannon to destroy the Vertibirds in one shot. As one approaches the next objective, the player will begin to see Vertibirds gunning down the runway, lasers firing in all directions. They will be firing on a contingent of Brotherhood soldiers, who are the "distraction" Tristan promised.

The mobile base crawler can only be entered via a ramp. To lower the ramp, one will need to enter the Air Traffic Control Tower and find the Main Access terminal. Upon reaching the main battlefield on the runway, take a right, and enter the small building through a set of stairs on the west side. Inside are a few Enclave robots, which can range from robobrains to sentry bots, depending on level. When the player reaches reach the top, activate the unlocked terminal and hit the "Lower Access Ramp" entry. Beware, though, that as one enters the control tower, three Vertibirds will appear overhead, the last of which fires three missiles straight at the tower. The resulting explosions could easily cripple or kill the player, so it is best to take cover on the stairs. Alternatively, you can shoot down the Vertibirds with the Tesla cannon, if you act quickly enough.

Return back down to the runway, and head on over to the ramp. There are several more Enclave troops, but a Brotherhood of Steel task force will arrive and cover the player. Run up the ramp, and enter the final Enclave stronghold.

Destroy the Enclave Mobile Platform with an Orbital Strike

The first thing one will come across is an Enclave Repulsion Field. Using the blue panel to the left, it can be deactivated (Science 80), set with a timed charge (Explosives 50), or smashed. Smashing the panel will cause an explosion (which will damage the player), as will setting the charge (the difference being that there is time to escape). Either way, the field will still be partially active, and passing through it will cause damage. If deactivated with Science, the field will be harmless.

Turning left will introduce the player to Enclave Squad Sigma after an alarm goes off. Turning right and heading into the repair bay yields plenty of ammunition, as well as an encounter with Stiggs, who fixes the robots. Talking with him yields some useful information:

Heading up the ladder in the repair bay or the stairs where Sigma Squad attacked will lead to the second level. The target is the mainframe in the center of the floor. The deathclaw research facility should contain one or two Enclave-controlled deathclaws, which will be a great asset if one still has the deathclaw control scrambler. The mainframe is locked behind several "High Clearance" doors, which can only be opened with a High Clearance keycard. The various Enclave officers each carry one, which will open all the doors. The mainframe itself is divided into two sections: Door control and Robot control. The door control terminal is unlocked and can be used to unlock any doors on the floor, the Armory, and the doors leading to the Platform. The Robot terminal is locked Hard, but if hacked, one can deactivate all the robots, or scramble their targeting parameters. If one has the Robotics Expert perk, they can even reverse the friend-or-foe settings, marking the Enclave as hostile, and themself as friendly.

Head to the Satellite Tower. Once inside, head to the top, to the terminal. Make sure you've thoroughly searched the crawler, then hit "Fire Payload" and choose your target:

Only two of the targets can be fired upon: Adams AFB Platform, or the Citadel. Be warned, anything in the Crawler will be lost forever, no matter which choice you make. Once you make the choice is made, unlock the door from the active terminal to the right, and head through the door at the top back outside, where a Brotherhood of Steel Vertibird lands. If Sentinel Lyons survived the activation of Project Purity, she will personally escort the player to the Vertibird.

If the Citadel was chosen: One is rewarded with 1000 negative karma, and on the flight back the pilots seem to think the Vertibird is malfunctioning when the Citadel will not respond to radio. Upon landing and seeing the smoldering ruins, they quickly pick up that it was the player, and attempt to kill them, deeming the Lone Wanderer a traitor and a murderer. Any other Brotherhood of Steel members encountered from here on, such as in the Washington Monument, GNR building, White House Plaza, Arlington Library, and the Jefferson Memorial, will be hostile as well. One also can enter the Citadel's hidden armory, filled with plenty of goodies such as Tesla cannons, alien power cells, Nuka-grenades, mini nukes, and Callahan's Magnum.

If Adams AFB Platform was chosen: One is rewarded with 1000 positive karma, and the Vertibird lands a little off Adams AFB to allow everyone to watch the missiles strike. After getting back on the Vertibird, the player is taken to the Citadel, where Elder Lyons is waiting with a heart-warming speech of thanks. One may then speak with Scribe Rothchild and Paladin Tristan for two additional unmarked quests. The player can also return to Adams AFB after the quest where there are eight Tesla cannons spread about in four different resupply crates. Three Dog will also occasionally make a funny report about the Lone Wanderer's deeds and tell his "children" to have pity on the Enclave; they're homeless after all!

"Who Dares Wins" is the regimental motto of the British Special Air Service (SAS) special forces, coined by the founder David Stirling. One of their main roles (and the role for which they were originally conceived) during the Second World War was the destruction of Axis aircraft and positions at airbases behind enemy lines in North Africa. The saying comes from the similar Latin expressions, "Qui audet vincit" and "Qui audet adipiscitur."