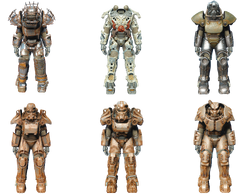 Power armor is a unique form of external armor in Fallout 4.

Power armor is a multi-component armor unit, comprised of a base frame, with assorted armor pieces mounted on it. For power armor to function it requires a fusion core as a source of power, which drains over time; actions that consume AP will increase the rate of depletion. Once depleted, the unit will still be operable, but the movement is heavily restricted as it is dead weight.

Power armor in Fallout 4 requires no training to use as it did in Fallout 3 and New Vegas, and is unique in other aspects as well.

Firstly, the separate armor segments are mounted on a frame, as opposed to previous suits that existed as holistic entities that were worn whole, aside from the helmet. The individual armor pieces can be reclaimed from deceased persons, however, the frame cannot be recovered as the corpse cannot be ejected from the frame.

Secondly, characters interact with the frame in the world to use the power armor, instead of equipping the power armor via the inventory. Power armor now uses fusion cores as 'fuel' to power them for a few hours. This is similar to how T-45d was supposed to use small energy cells as a fuel source in Van Buren.

Once the fusion core is drained (or if there is no core installed in the armor at all), the user will still be able to slowly walk in the armor but will be over-encumbered and unable to use V.A.T.S. or hold breath when aiming with scopes. Power armor negates falling damage, as well as damaging others near the point of impact.

Third, however, is the most 'accurate' rendition to date with regards to the size of the armor, its general movement, and abilities. Unlike the descriptions regarding power armor from previous Fallout games, the power armor frame does not appear to make use of any recognizable form of unified hydraulics system for strength enhancing purposes, although they could somehow be contained within the armor segments or the base frame itself. It instead appears to solely derive its strength boosting abilities entirely from servo motors strategically placed within key points of the frame.

Finally, instead of gloves and boots, the power armor frame has a set of fully articulated mechanical hands and feet, which mimic the wearer's hand and foot movements via controls in the shins and forearms. This increases the wearer's arm length and overall height by approximately one foot.

Power armor is capable of boosting the Sole Survivor's strength beyond the normal S.P.E.C.I.A.L. limit of 10, potentially going as high as 14 with the appropriate modifications. Wearing power armor negates any bonuses given by standard armor.

Power armor helmets have fully functional headlamps that are used in place of the Pip-Boy lights, which is disabled while wearing the armor.

Unlike previous renditions of power armor, each power armor piece has its own hit point counter which depletes as damage is taken, as opposed to being spread across the full suit. Broken power armor pieces cannot be mounted on a power armor frame, but can be dropped and displayed. They can also be sold for the same price as a piece in perfect condition.

In Fallout 4 power armor has had several alterations in regards to its physics (as the frames with their plates affixed are heavy enough to crush bear traps by stepping on them). This weight adjustment renders the wearer incapable of swimming, with the user instead walking across the bed of any given body of water. This makes wearing power armor at places like Libertalia risky as falling off the walkways will cause the wearer to sink to the bottom and have to walk to shore.

Handheld or wrist-mounted weapons such as knuckles, cannot be equipped due to the significant difference in fist and wrist size.

While wearing helmeted power armor, the Sole Survivor can remain underwater for an extended period, though not indefinitely; after several minutes submerged, the drowning animation will play, and the player character will lose health rapidly. Unless one is close to shore and can jump to get their head above water (so as to breathe air), the Sole Survivor will drown. Eating a mirelurk cake, which allows breathing underwater, will prevent or end this drowning.

Power armor also completely negates all fall damage, with or without any pieces of armor attached, enabling the wearer to hop down from even the tallest of skyscrapers without any harm to either health or the armor itself. This, however, causes a very loud thud and will alert any nearby enemies of the player character's position. Landing on or in close proximity to an enemy or even friendly NPC deals a great deal of damage to them from the fall as well, which may cause them to become hostile.

The elevation indicator on the compass disappears while wearing power armor, making all foes appear as if they are on the same floor on the compass. All distance values disappear as well, which can potentially result in some unpleasant surprises when marked threats are actually much closer already than one thought.

Companions can be instructed to enter power armor via the companion command system. This is done by selecting Talk when facing a companion, then instructing them to Enter power armor when the player character's crosshair is over the power armor suit they wish for them to occupy. Certain companions (e.g. Nick and Hancock,) will remove the helmet by default. One can force them to wear the helmet by equipping it from the companion's inventory, as with standard armor pieces. To have a companion exit power armor, select the Talk dialogue option and Relationship will have been replaced by Exit Power Armor. Some companions however are unable or will refuse to use power armor.

Paladin Danse will refuse to exit his power armor and cannot be assigned to another suit. His power armor also does not degrade from combat or fall damage.

Companion worn power armor does not drain the fusion core if it has one installed and can use core-less frames without penalty.

The parts may be repaired and modified at power armor stations located around the Commonwealth, where a power armor frame is installed at, or within close proximity of the station. The armor and frame can neither be renamed nor scrapped for component materials. Power armor stations can be built at settlement locations under the crafting tab in workshop mode, if the player character has the necessary perks.

There are six tiers for each power armor piece, each granting higher damage resistance and health. The amounts of materials required for upgrading power armor pieces are fixed for each specific item, which means improving an armor piece from tier E to F has the same material cost as upgrading it from tier A to F. Depending on the player character's current situation, it might sometimes be wiser to postpone the next upgrade until higher (or the maximum) ranks of Armorer and Science! have been unlocked in order to save resources. This is especially true for the more advanced power armor models as they require much larger quantities of increasingly rare and specialized materials for their upgrades than for example T-45 or raider power armor.

There are several mods that can be installed in various pieces.

Each model of power armor (except the raider power armor), can be modified with a unique paint scheme, most of which are acquired by progressing through the questlines of the four main factions. Some paints (Minutemen, Railroad) unlock after only a handful of quests while others like the Institute Paint require the completion of the entire corresponding questline. All of them grant the wearer a bonus to a specific SPECIAL stat if all six armor pieces are painted the same:

The helmet's lamp can even be customized with different colored light filters or a more intense white light in place of the default one.

Empty power armor frames are rare to find in the Commonwealth but can be purchased from several merchants. These are the base units on which all power armor types are mounted. They also have the secondary function of acting as a stand within power armor stations for the Sole Survivor to repair and upgrade power armor pieces.

T-45 power armor was the first set of armor manufactured for military and to a lesser degree domestic and commercial use. It is often the first suit to be encountered in the Commonwealth during the quest When Freedom Calls. It is relatively weak compared to its more advanced counterparts.

T-51 was the most advanced power armor in wide commercial use before the outbreak of the Great War. In the Commonwealth, the T-51 is the suit of choice for the Railroad.

Developed in early 2077 after the Anchorage Reclamation, the T-60 series of power armor was designed to eventually replace the T-51 power armor as the pinnacle of powered armor technology in the U.S. military arsenal. The Brotherhood of Steel uses them extensively across the US.

The X-01 power armor is a set of power armor created shortly before the bombs fell. It was later engineered by remnants of the U.S. military after the Great War.

* This version is cut in the main game, however it is used in the Nuka-World add-on.

The only exception to this is the suit of randomized parts, which have their own separate pool (per component) to draw from:

Often referred to as the "black devil" for its signature design, the X-02 is an advanced power armor model developed by the Enclave for its special operations forces. With multiple skin options and custom Tesla modifications, the X-02 is a powerful tool to help storm through the wasteland.

The result of a post-War research and development project undertaken by the Enclave at the Adams Air Force Base, this is the state of the art power armor. It is conclusively the best and most advanced model of power armor revealed to date.

The USSA-developed power armor was used by Hubris Studios on the set of Captain Cosmos as part of a promotional stunt[1] hoping to kindle support for the failing Mars Shot Project, shortly before the Great War.[2]

Similar in origin and function to raider power armor, this suit has Giddyup Buttercup parts on the helmet, arms, torso and legs. It is a standalone power armor type and does not share anything else than its appearance with the raider power armor.

The parts of armor (ex. body, head, etc.) are in a fixed number and type for each spawn point. Some frames appear to spawn different parts by loading a save from before ever entering that area, but the type of armor (e.g. T-45, T-51, X-01, etc.) depends on the player character's level when entering the area for the first time. Additional power armor pieces of any type can be purchased from Rowdy at the Atom Cats garage.

If worn, frames can be stolen by destroying or pickpocketing the fusion core. Whenever a player character enters a stolen frame, if there are power armor pieces equipped on the frame while doing so, companions that the player character currently has in tow, or within the area, will consider the act as "stealing" and the player character's affinity with them will be lowered. 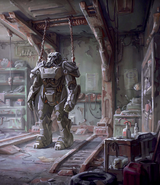