“The T-51b powered infantry armor is designed with the latest passive defense features for both civilian and military disturbances. The back-mounted TX-28 MicroFusion Pack generates 60,000 Watts to power the HiFlo hydraulic systems built into the frame of the suit.”— Power armor specs

T-51b powered Infantry armor or power armor represented the peak of armored infantry technology before the Great War. Now, only the most technologically advanced factions with ties to the pre-War American military or federal government, such as the Brotherhood of Steel or the Enclave, have access to this type of power armor.

The T-51b was developed in the laboratories of the West Tek Research Facility. At the end of the Anchorage Reclamation in January 2077, the armor had become the standard issue for soldiers in the Army's mechanized cavalry regiments.

Note: After the first lockpick attempt all nearby Brotherhood members turn hostile. Senior paladins and senior scribes do not come out of the storeroom, so the second attempt is impossible (when closing in on the door, the battle starts). The only possible way to lockpick the storeroom during combat is to use an electronic lock pick.

US soldier executing a Canadian freedom fighter in the game's intro 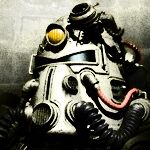 Concept art for a soldier in power armor ambush