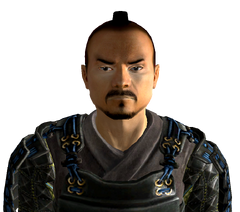 Toshiro Kago without the helmet

Toshiro Kago is an abducted samurai found aboard Mothership Zeta in 2277.

Toshiro Kago is one of the four people that the Lone Wanderer thaws out on board Mothership Zeta. As he doesn't speak English and no other character speaks Japanese, conversation is largely limited to gestures. Paulson refers to him as "the Chinaman,"[1] until Sally corrects him,[2] after which Paulson changes his description to "oriental."

It appears Kago is a samurai warrior, and well-skilled in sword combat. He is capable of slaying aliens, should the samurai's sword be presented to him.[3]

After the events of Mothership Zeta, he stays aboard Zeta and cannot be interacted with. He will disappear if one revisits the Steamworks but will remain on the bridge if the player character travels to or from the Capital Wasteland. He can be found later in the living quarters.

Despite being unable to understand English, Toshiro still responds with different dialogue depending on whether the player character speaks to him with the polite, neutral, or smarmy dialogue options.

* Toshiro will use the sword if it is either recovered from the waste disposal area and given it to him, or if one never enters the Disposal area. Should the player decide to keep the sword, he will be unarmed. 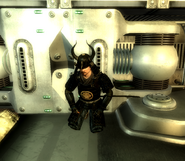 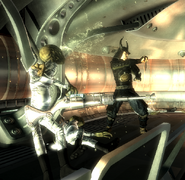