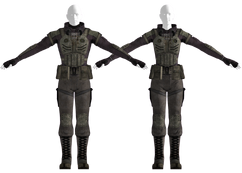 The assassin suit (or stealth suit Mk I) is a unique set of light armor in the Fallout: New Vegas add-on Dead Money.

The assassin suit is the first working version of reverse-engineered Chinese stealth armor suits developed at the Big MT X-13 research facility. Unlike its successor, the stealth suit Mk II, it is not computerized in any way and functions as a regular suit of armor. As indicated by the game files, the assassin suit was worn by Christine Royce.[1]

The stealth suit is a streamline full body suit with protective attachments on the chest, shoulders, forearms, and knees. The entire suit is a dull gray-green color for blending in and around urban settings. It provides a moderate Damage Threshold of 14 but weighs 20 pounds. Keeping true to its name, it also has a Sneak bonus of 10.