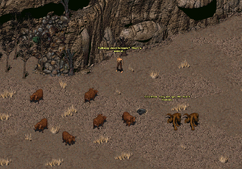 “I'm not sure I believe you, but here's your pay. Hell, if you been lying, my boys will find you.”— Roger Westin

Stop brahmin raids is a quest in Fallout 2.

This quest is begun by receiving a reference from Dumont, the Chief of Police, who is found standing on the street across from the police station in NCR. Tell him you are looking for work and he will refer you to Roger Westin at his ranch, in the southern part of NCR. When you arrive at Westin's ranch you can tell the gate guard you were sent by Dumont to be allowed access. Once inside the ranch, talk to Westin and he will direct you to his ranch foreman, Felix. Felix will take the player character where the brahmin are being attacked and where the one will discover that the culprits are a pack of deathclaws. At this point, if the player character's Outdoorsman skill is high enough, they can follow the deathclaws back to their lair. Return to Westin and inform him of the deathclaw attacks to collect the reward.

Having already helped Gruthar fix the Vault 13 computer before - or after speaking to Westin, but not talking to Felix, and going to the Brahmin location - makes this quest unavailable (Felix and Westin will tell the Chosen One that the attacks to the Brahmin had stopped), unless having accepted the quest to kill Bishop, in which case the next quest obtained will be this one. The deathclaws will recognize you and walk away.

Due to the layout of the encounter map, regardless of the player character's Outdoorsman skill level, the Chosen One can reach Vault 13 from here by clicking on the far upper right corner. He will run off-screen and leave through a green exit and enter the cave to the Vault. [已验证]