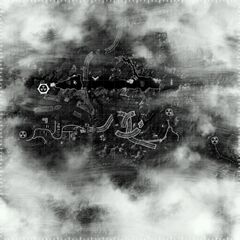 “The way ahead and below - leads to the heart of the Divide. And there... you and I, we'll have an ending to things.”— Ulysses, Lonesome Road

The Divide is a common term for a stretch of devastated land northwest of the Mojave, in the Mesquite Valley, on top of the Nevada/California border. It is the setting of Lonesome Road.

Although Hopeville and Ashton were abandoned after the War, a small community would inhabit the storm-covered lands. With the harsh weather unleashed on it constantly from the Big MT, those who inhabited the ruins of the Old World in Hopeville and Ashton drew strength and inspiration from the ancient symbols and technology that surrounded them. In the 23rd century, the settlement flourished thanks to a single courier who was willing to brave the seasons and storms to deliver packages to the community. Whatever the reason, the courier braved that hard road repeatedly, giving them hope and a connection to civilization.[8]

This community eventually styled itself the Divide, taking name not from the monstrous gash in the earth that would eventually appear there, but its role both as a divide and a bridge between the east and west, the New California Republic and the Mojave Wasteland. The community had a chance to become something akin to a second Shady Sands, founding something better than either the NCR or the Legion.[9] The nation that would stir to life here had a chance of bridging the gap between the East and the West, between Caesar's tribes and the republic. Something greater than either, that could unify the two flags into a single banner.[10]

Before that could happen, however, the New California Republic moved in, following the trail blazed by the Courier. The Divide would become a major secondary route into the Mojave, reducing the traffic on the Long 15 to the core lands of the republic. Both the Army and the merchant houses of the republic benefited from the new route established through the storm-wracked region. Naturally, two lifelines leading into the Mojave were a serious problem for Caesar's strategy, as it gave the NCR a logistical advantage despite the intense campaign of sabotage in the period leading up to the First Battle of Hoover Dam.[11] In the months leading up to the battle, Caesar dispatched a group of frumentarii and assassins to cut the supply line and deny the road to the republic, building on the destruction of New Canaan and raids on caravans out west.[12][13][14][15]

However, it was the Courier that established the land trail to the Divide who would play the pivotal role. As legionaries and NCR troops executed the plans of their masters, the Courier delivered a single package from the faraway Navarro, recovered by the republic and sent to the Divide. The NCR believed the people who lived among the silos and Old World symbols could help them make sense of the item recovered in the Enclave's former base. What they didn't realize was that the package would seal the Divide's doom. After the Courier delivered it, the citizens of the Divide opened it up and the device suddenly activated, linking with the launch computers hidden in the dormant silos and sending launch codes and overrides. Warheads started exploding beneath the ground, triggering a massive earthquake that ripped the land open, twisting Ashton, Hopeville and the military facilities above and beneath. It became an expanse of cracked, blighted landscape, while the sand and ash from the devastation was caught by the artificial storms, turning an already savage weather into one, monstrous dust storm[16][17] that could skin a man alive.[18]

In fact, it did flay people alive. Those who weren't killed by the nuclear detonations or debris let loose by the earthquake were twisted by the radioactive storms, flayed alive and turned into mutants, dead men walking sustained only by the radiation without and the hate within. Regardless of their previous affiliation, the marked men banded together into packs, repairing their armor and weapons with whatever the new Divide provided.[19] There was only one survivor, saved from death or marking by the medical robots of the Divide, which mistook the Stars and Stripes on his back for a U.S. military uniform. He walked out of the Divide, whole on the outside, but broken within.[20]

Despite the loss of the Legion task force, the destruction of the Divide was a strategic victory for the Legion. With the land around Hopeville and Ashton destroyed and the sandstorm wreaking havoc on all who tried to pass through, the NCR lost its secondary supply route and couldn't take California State Route 127 north to get around the mountains anymore. Companies sent through were torn apart before they even reached Nevada soil, with Ranger scouts confirming that the route was impassable.[21][22][23] Without it, NCR could not march reinforcements into Nevada fast enough to capitalize on their victory at the First Battle of Hoover Dam, giving Caesar time to retreat to Arizona and prepare his Legion for another confrontation.[24]

The story of the Divide continued, however. The memory of the settlement has vanished from common consciousness, scrubbed by the violent storms that rendered it impossible to brave for all but the hardiest of travelers. One person remembered. Ulysses walked the wastes for four more years, reflecting on the destruction brought upon the fledgling nation by a single courier. Disillusioned with the Legion and the NCR alike, Ulysses decided to make history repeat itself. Unlike the courier, however, he would do so with open eyes. He gathered knowledge and slowly mastered the Divide's many secrets, bringing the nuclear silos back to life as best he could. The arrival of ED-E in the Mojave Wasteland sped the process up greatly, as the Divide's machines remotely scanned the Enclave eyebot and manufactured a new series of robots that accelerated the restoration of the silos. In the process, fragments of the nuclear detonator that the Courier delivered were scavenged and used to manufacture an unique maintenance eyebot at the Hopeville missile silo.[17]

Recognizing this as an auspicious moment, Ulysses sent a single message to the Courier who just cheated death at Goodsprings, inviting them to walk the lonesome road through the Divide and bring the eyebot to him. Then he waited, preparing the nuclear missiles to wipe the slate clean once more, but not before he had a chance for reckoning with the Courier, beneath the storms of the divide and the Old World flag.[7]

Located northwest of the Mojave Wasteland, in the Mesquite Valley, the Divide is a region that was once the home of Hopeville, a planned community built around and over a ballistic missile silo complex, and Ashton, a large city that doubled as a major highway junction. However, whatever the Divide was is largely irrelevant, as the nuclear disaster that befell the region at the Courier's hands has turned it into an unrecognizable mess of twisted metal, concrete and dirt, slowly weathered by the massive sandstorm blanketing the entire region.

The nuclear missiles concealed within Ashton's silos were launched by the automatic detonator delivered by the Courier, exploding beneath the ground. The explosions combined with the presence of the Pahrump Valley fault line created a massive canyon stretching east to west, filled with collapsed buildings, vehicles, and infrastructure from Ashton. The highway network was warped and twisted by the combination of factors, with entire fragments of the elevated superhighway breaking off and crushing buildings below.

Hopeville and adjacent southern military facilities escaped much of the devastation, as missile silos were outside the range of the detonator's transmitter. However, they were subjected to the terrifying earthquakes and the subsequent storms, with at least one missile bunker listing nearly fifteen degrees due to the shifting foundations. Structural reinforcement and armor ensured the survival of these installations, complete with power infrastructure.

The Divide only appears in the add-on Lonesome Road and as a map in Old World Blues, but the location is mentioned in Fallout: New Vegas and the add-ons: Dead Money, Honest Hearts, and Old World Blues. 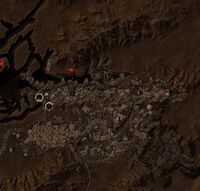 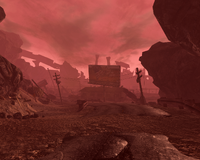 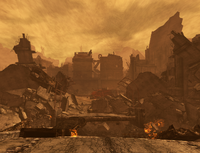 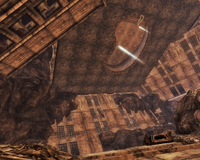 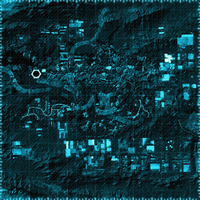 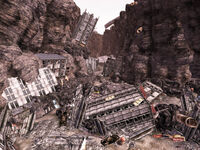 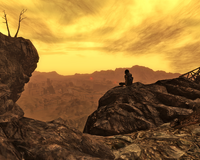 Ulysses, sentinel of the Divide 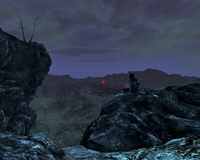 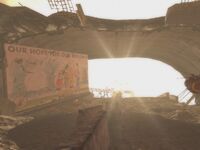