Rank 1:
Re-roll a single d20 when threatening or scaring another person
Rank 2:
Gain the Threaten major action in combat

“In some conversations, you gain the ability to initiate combat while terrifying a mob of opponents, sending them fleeing away for safety.”— in-game description

Terrifying Presence is a perk in Fallout: New Vegas.

In some conversations, the user gains the ability to initiate combat while terrifying a mob of opponents, sending them fleeing away for safety or attacking in fear of their lives. 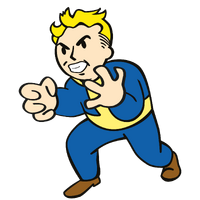 At rank 1, Terrifying Presence allows a re-roll of a single d20 when making a test to threaten or scare an opponent.

At rank 2, gain the major action to threaten an enemy within medium. The default check is Strength + Speech (difficulty 2) with a success forcing the enemy to flee away from the target. The enemy may take other actions after fleeing.

Joshua Sawyer came up with the perk but regrets not giving Terrifying Presence any general combat use, as well as not addressing its inconsistent implementation into conversations. As it stands, the perk is very special-case.[1]