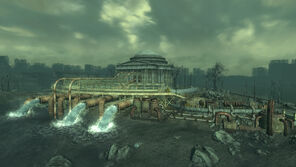 The purifier activated after the battle

The Battle of Project Purity was a battle fought between the Capital Wasteland Brotherhood of Steel and the Enclave in the year 2277. The Brotherhood of Steel aimed to reclaim the Jefferson Memorial from the Enclave in order to stop them using the purifier for Project Purity for their own plans, and to activate it themselves and distribute fresh, pure water to the citizens of the Capital Wasteland.

When the Lone Wanderer arrived at the Citadel, there was a debate between Sentinel Sarah Lyons with her squad, and Owyn Lyons with Senior Scribe Reginald Rothchild, over whether to attack and reclaim the Memorial from the Enclave. The Lone Wanderer gave the Elder information shaping the discussion, as well as the fact that the G.E.C.K. was lost to the Enclave, resulting in him ordering Liberty Prime to be launched and the Jefferson Memorial to be attacked. Liberty Prime was carried by crane out of the Citadel walls and set down near the Francis Scott Key Bridge. The Lyons' Pride and the Lone Wanderer, who was now a member of the squad, followed Prime outside.

Immediately after Prime was set down outside the Citadel, the Enclave sent barrages of artillery from the Memorial at the Pride and sent waves of Vertibirds to eliminate them. However, neither of these measures were any use, due to Prime taking almost a hundred direct hits from artillery and enduring no damage whatsoever, and his head lasers dispatching Vertibirds with ease. The Brotherhood set up snipers along the beginning of the Francis Scott Key Bridge. With his ability to disarm photonic resonance barriers, Liberty Prime led the Pride along the Francis Scott Key Bridge, slaughtering hordes of Enclave squads with his head lasers and tactical nukes. They passed the irradiated metro with the very same outcome.

Once Prime set foot on the Memorial grounds, the Pride stayed outside and assisted Prime in eliminating a wave of around thirty Enclave soldiers from the higher scaffolding of the Memorial to act as a distraction while Sentinel Lyons and the Lone Wanderer broke into the facility and fought their way to the rotunda. Once they reached the rotunda, they were confronted by Autumn and two of his guards. The outcome of this is unknown, however, after Autumn was dealt with, Madison Li sent a message via intercom to the Memorial, informing them that pressure was building up in the purifier's holding tanks after massive damage during the fighting, some of which seemed to be accidental, and others sabotage. The pressure had to be released by activating the purifier, or else the facility could explode. However, the purifier activation hub was flooded with lethal levels of radiation. Lyons and the Lone Wanderer or their companions were forced to decide who would activate the purifier. Once they decided, the purifier was activated and the water was distributed across the wasteland. The Lone Wanderer didn't act upon Eden's wishes to sabotage the purifier with the modified FEV.[1]

Both Sarah Lyons and the Lone Wanderer were knocked into comas and taken to the Citadel for treatment. Meanwhile, Scribe Bigsley set up the delivery center at the Jefferson Memorial, and took charge of the water deliveries across the region. Rivet City was enlisted to support these efforts and take charge of water caravan deliveries, led by Officer Lepelletier.

If the Lone Wanderer did not, Liberty Prime was sent to destroy Raven Rock. The Enclave retreated to Adams Air Force Base. The Lone Wanderer awakened two weeks after the battle, beginning the events of Broken Steel.

The Battle of Project Purity appears only in Fallout 3 and is mentioned in add-on Broken Steel, and Fallout 4