The chip that controls the system is a fine example of 21st century electronics. It is a large circuit board with embedded vacuum tubes that regulates the filtration systems inside the water purifier and monitors the output for signs of contamination.[1][2] While the water chip can be jury-rigged for small scale water purification,[3] it is specifically designed to interface with vault water computers (via a specific slot and jack; the chip still requires independent power supply through its own cord), making it useless for large scale water purification without a vault.[4]

While it is theoretically designed to last, the chips were manufactured by a low-bid contractor, resulting in poor quality and a high failure rate. Such was the case with Vault 13 in 2161, made worse by the fact that the process was too complicated for a workaround system.[5] They also came in boxes with five chips each.[6]

However, the chips are interchangeable and work in any vault water computer, they just require a self-test and reboot after connecting.[7]

The events of Fallout begin after Vault 13's only water chip breaks, and the only means to compensate for the diminishing water supplies is to leave and find a new chip. The original Vault Dweller, although not the first to be picked for the task, is sent on a quest to find a replacement in 2161. After encountering many people and places in the wastes of southern California, he finds a suitable replacement chip in Vault 12, the vault underneath the Necropolis, and returns it to Vault 13.

Ironically, due to a mix-up with shipping orders, Vault 8 received the additional water chips that Vault 13 had ordered in place of their second allotted Garden of Eden Creation Kit, which went to Vault 13.[8]

Despite being referred to as a chip, the in-game visuals of the device, both the 3D rendering and the background circuit diagram, indicate that it is built entirely using thermionic valves, not even discrete transistors, in the traditional style of such 50s technology, as a metal box chassis with protruding glass vacuum tubes; the "chip" may not actually contain any silicon at all. The name is also slightly misleading in that the chip itself does not produce or process water, but controls other equipment that does. 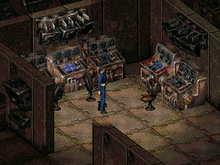 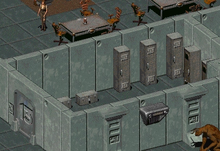 Water chip in the Fallout Demo. Alters slightly from the implemented chip
在此图库中添加照片