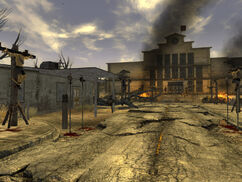 “I want you to teach everyone you meet the lesson that Caesar's Legion taught here, especially any NCR troops you run across.”— Vulpes Inculta

Cold, Cold Heart is a side quest in Fallout: New Vegas.

Once the player character arrives at the town of Nipton, a man will approach the courier and happily inform them that he has won the lottery. Upon further exploration through the rubble, it can be determined that the Powder Gangers, who once took this town, have now suffered the fate of crucifixion. After moving further toward the town center, Caesar's Legion members can be seen gathering near the double doors of the town hall.

Spread the word of Legion atrocities

Travel west to the highway intersection, then southwest, following the highway up the hill to Mojave Outpost. Two large statues of Rangers shaking hands can be seen from a good distance. Sgt. Kilborn walks around outside and occasionally paths past the statues out of range of the rest of the outpost. When speaking to him, the Courier can either inform him of Nipton's destruction or shout a Legion battle-cry and attack him. Either choice completes the quest, resulting in 150XP. No reputation is gained or lost either way.